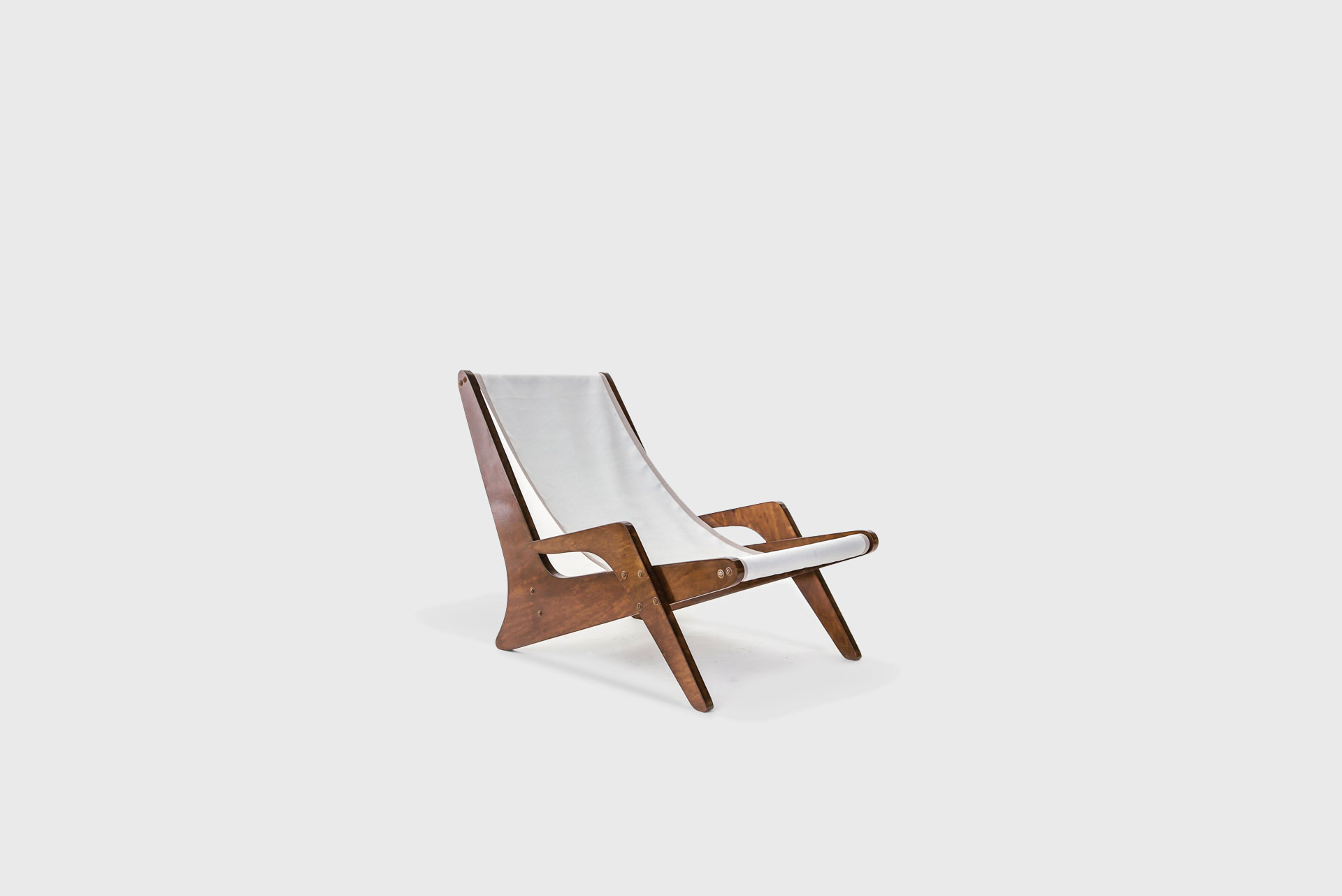 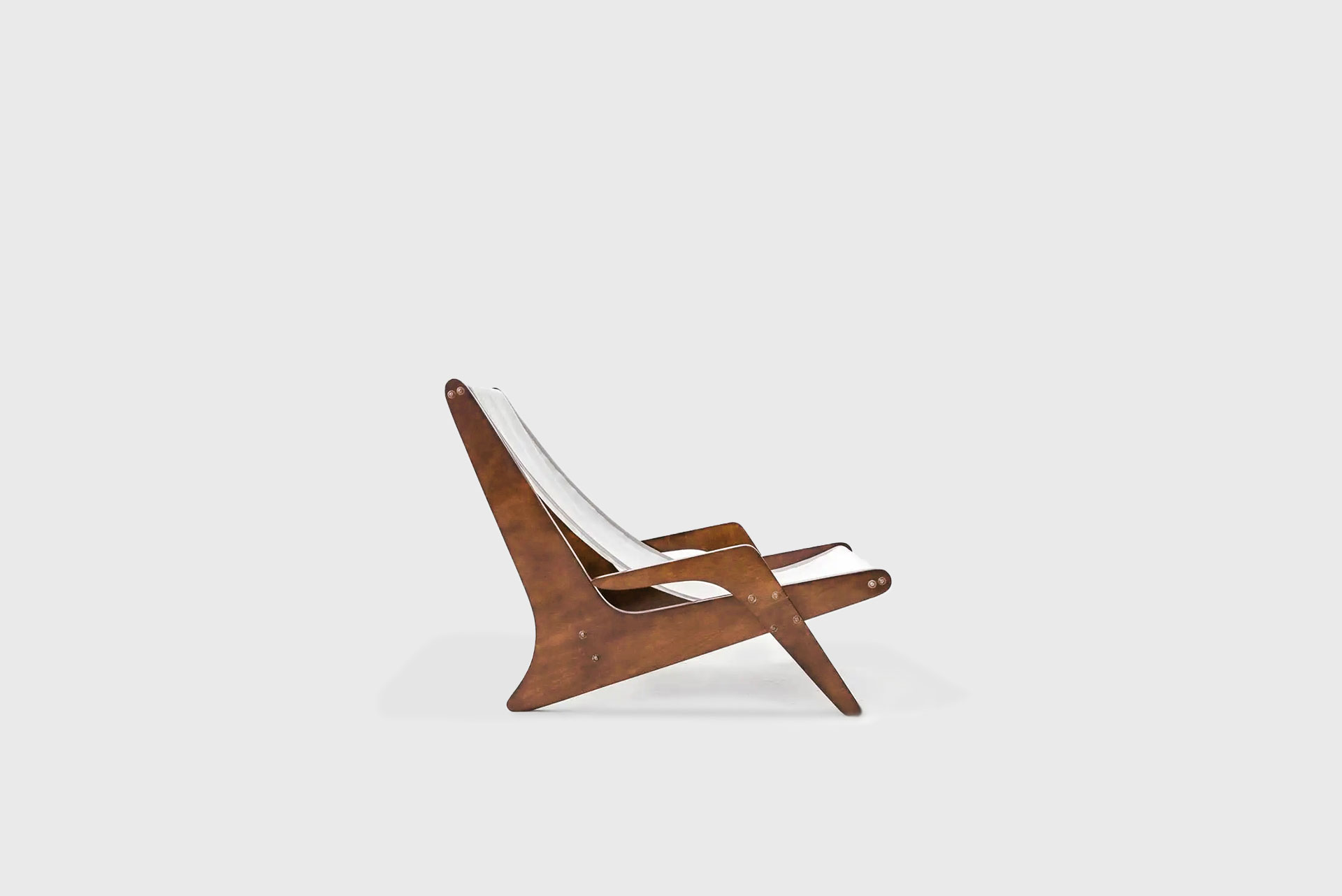 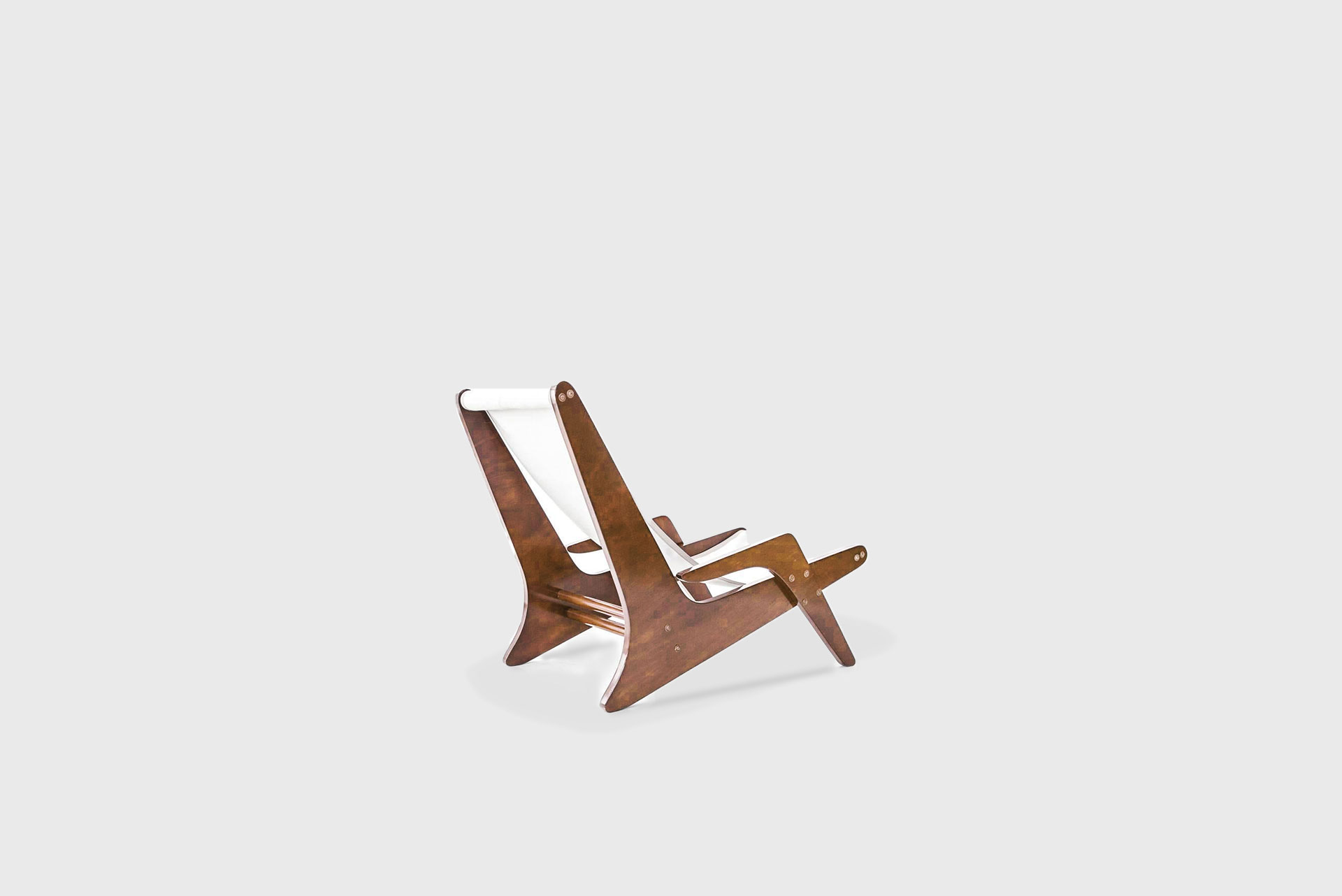 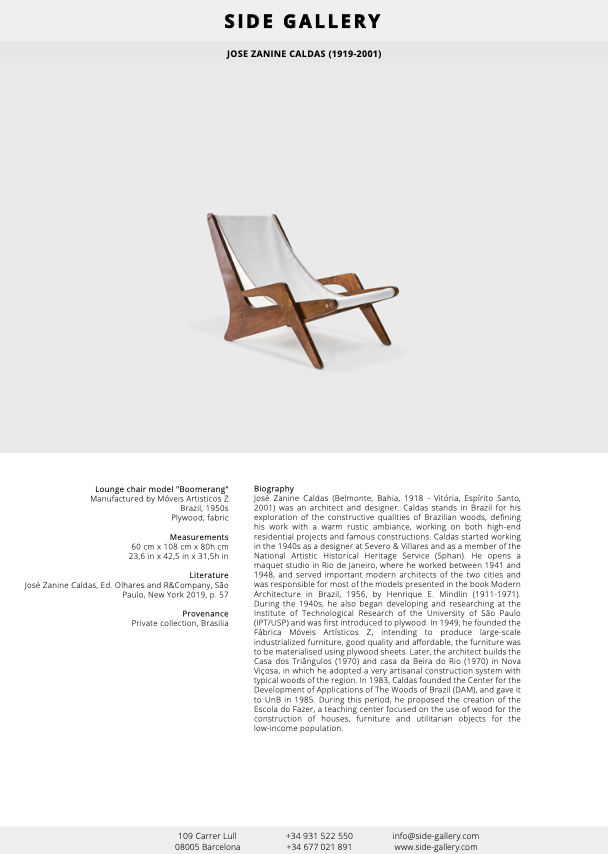 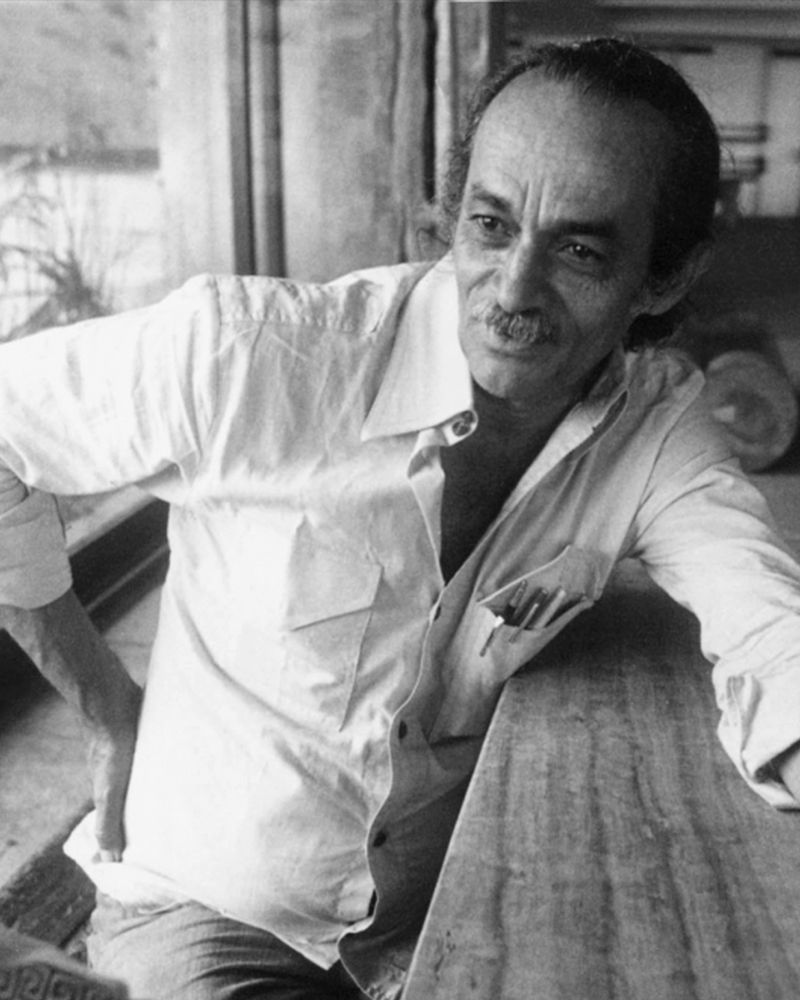 José Zanine Caldas (Belmonte, Bahia, 1918 - Vitória, Espírito Santo, 2001) was an architect and designer. Caldas stands in Brazil for his exploration of the constructive qualities of Brazilian woods, defining his work with a warm rustic ambiance, working on both high-end residential projects and famous constructions.

Never actually training as an architect, he started working in the 1940s as a designer at Severo & Villares and as a member of the National Artistic Historical Heritage Service (Sphan). He opens a maquet studio in Rio de Janeiro, where he worked between 1941 and 1948, and, at the suggestion of Oswaldo Bratke (1907-1997), moved the studio to São Paulo, from 1949 to 1955. The studio served important modern architects of the two cities and was responsible for most of the models presented in the book Modern Architecture in Brazil, 1956, by Henrique E. Mindlin (1911-1971).

During the 1940s, he also began developing and researching at the Institute of Technological Research of the University of São Paulo (IPT/USP) and was first introduced to plywood. In 1949, he founded the Fábrica Móveis Artísticos Z, intending to produce large-scale industrialized furniture, good quality and affordable, the furniture was to be materialised using plywood sheets. This method minimised material waste and the need for artisan skills, as the parts were mechanically produced, and the use of labor was only needed for the assembling of the furniture.

His time at Móveis Artísticos Z, in 1953 was relatively short-lived and he left the company in 1953 and instead worked on landscape projects until 1958 in São Paulo, when he moved to Brasília, where he built his first house, also in 1958, and coordinated the construction of others until 1964. Appointed by Rocha Miranda to Darcy Ribeiro (1922-1997), he joined the University of Brasília (UnB) in 1962 and taught modeling classes until 1964, when he lost his position due to the military coup. He set off and traveled through Latin America and Africa, an experience that remarkably affected his work.

On return to Brazil, he built his second house, the first of a series of projects in the Joatinga region of Rio de Janeiro. In 1968, he moved to Nova Viçosa, Bahia, and opened a workshop, which ran up until 1980. His experience in the Bahian city was shaped by his renewed love and contact with nature, and he began working closely with environmentalists. In one of these collaborations, he participated in the project of an environmental reserve with the artist Frans Krajcberg (1921-2017), for whom he also designed a studio in 1971. The furniture he designed during this period is reflective of his ecological sensitivity. His works were constructed with crude wooden logs, whose twisted lines inspire his drawings.

It is also in Nova Viçosa that the architect builds the Casa dos Triângulos (1970) and casa da Beira do Rio (1970), in which he adopted a very artisanal construction system with typical woods of the region. According to the historian and architecture critic Roberto Conduru, Caldas' performance was relevant for the diffusion of environmental values in architectural projects: a "taste for the alternative and the rustic was disseminated throughout the Brazilian territory [...], encouraged by environmental preservation campaigns, by the wear and tear of the current models in reinforced concrete and by the re-emergence of the regionalist ideal in the international panorama "1.

Between 1970 and 1978, he kept an office in Rio de Janeiro, returning in 1982. In 1975, the filmmaker Antonio Carlos da Fontoura made the film Arquitetura de Morar, about the houses of Joatinga, with a soundtrack by Tom Jobim (1927-1993), for whom Caldas designed a house. The architect's work was exhibited two years later at the Museum of Modern Art of Rio de Janeiro (MAM/RJ), at the São Paulo Museum of Art Assis Chateaubriand (Maps) in Belo Horizonte, and the following year at Solar do Unhão, in Salvador.

Between 1980 and 1982, The Helium House Olga Jr was designed and built in São Paulo. Caldas outlined the plans for the construction, sourcing all the wood, the actual assembly of the house was carried out by the owner. The house was defined by a wooden structure that stands out from the fence walls, the clay tile roof of wide eaves, and the demolition materials that give the building rusticity, warmth, and nostalgia. The house was similar to those built in the 1970s for Eurico Ficher and Pedro Valente in Joatinga.

Even though much of Calder's early work was centered around building houses for the elite, in the 1980s, the designer dedicates himself to the DAM, where he rigorously researched popular housing based on artisan construction processes and where users participate in the construction process. At the Brasília unit, he developed prototypes of popular houses with eucalyptus logs as a structure and sealing in soil-cement, betting on an ideal of self-construction already tested at Casa do Nilo, in São Gonçalo, Rio de Janeiro.  From that moment on, as occurred with his furniture designs, Caldas adopts the use of crude wood logs rolled - and no longer rigged - usually discarded, allied to demolition materials, which radicalize the effect of rusticity and warmth. This method also spread to non-residential projects, such as the Barra das Princesas Agropecuária S. Fazenda Chapel in Araguaia, Mato Grosso, the chapels of Guarapari, Espírito Santo, and Itapissuma, Pernambuco and Pousada Pedra Azul, in Domingos Martins, Espírito Santo.

Calder's success, without a doubt, was thanks to his modeling studio, where his clientele noticed his ability to propose solutions to the design problems he identified during the execution of the models. In 1986, however, the publication of his work in the magazine Projeto n. 90 initiated a controversy in the Regional Council of Engineering and Architecture (Crea) over the fact that Caldas was self-taught. Several architects jumped to his defense, among them Lucio Costa (1902-1998), who awarded him five years later, at the 13th Brazilian Congress of Architecture in São Paulo, with the title of honorary architect given by the Institute of Architects of Brazil (IAB).  In 1989, he was reinstated to his post at UnB, but did not teach. That year, he traveled to Europe, where he designed residences in Portugal and taught at the École d ́Architecture in Grenoble, France. The Musée des Arts Decoratifs in Paris held an exhibition of design pieces in 1989, the same year he received the silver medal from the College of Architects of France.

The integration of industrialism of the 1950s and the ecologism of the 1970s was a considerable challenge to many industrial designers. This was a theme that was very much present in Calder's work. It was this debate that removed the architect from the proposal of serialisation carried out in Moveis Z. It brought him back to craftsmanship and the indigenous language of Brazil, the house of the architect Carlos Frederico Ferreira (1906 - ca.1996) and Casa Hildebrando Accioly de Francisco Bologna (1923), are both examples of Calder's connection with his grounded roots. José Zanine Caldas has left a significant legacy, permeating both serial production and the priority of native manufacturing. 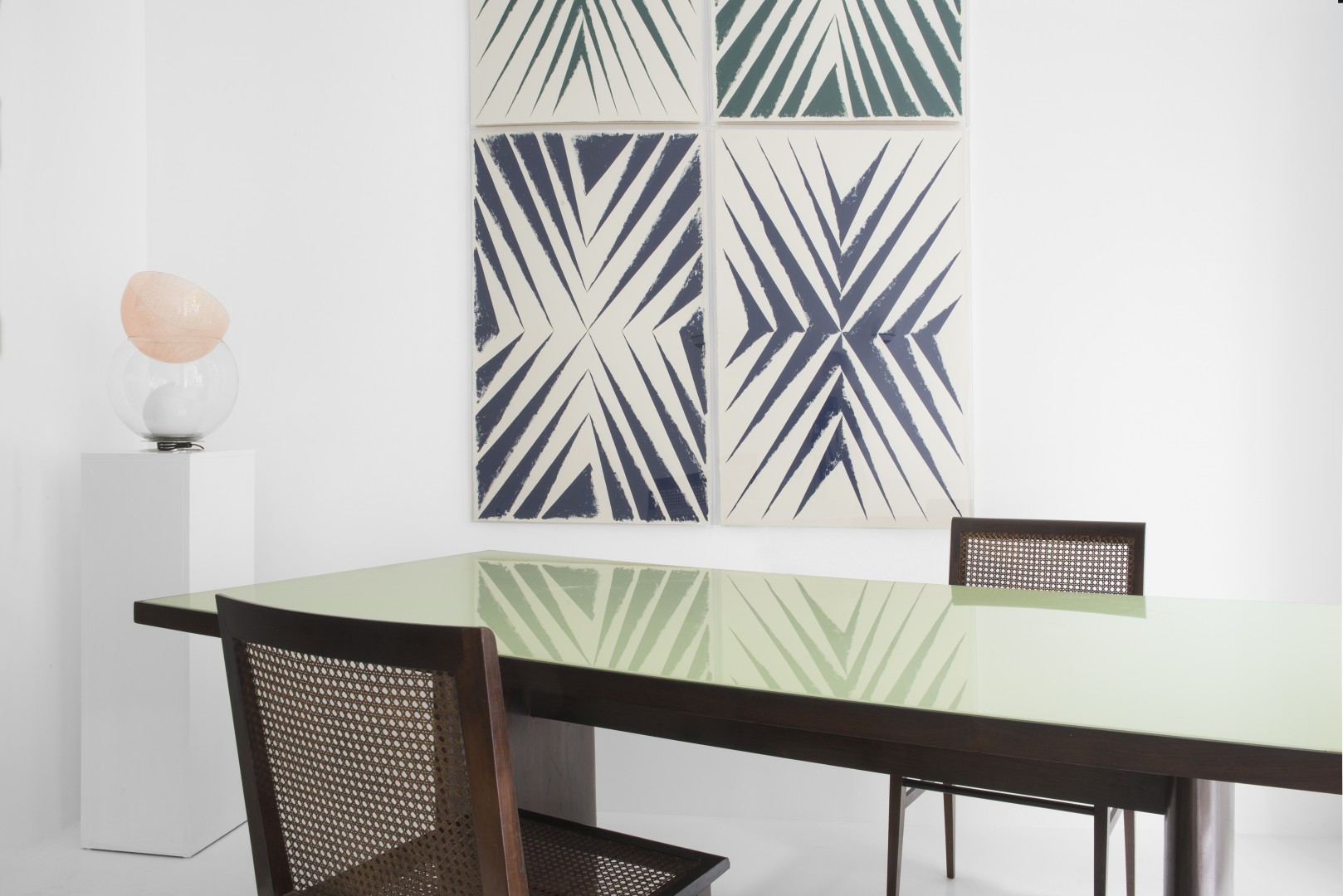 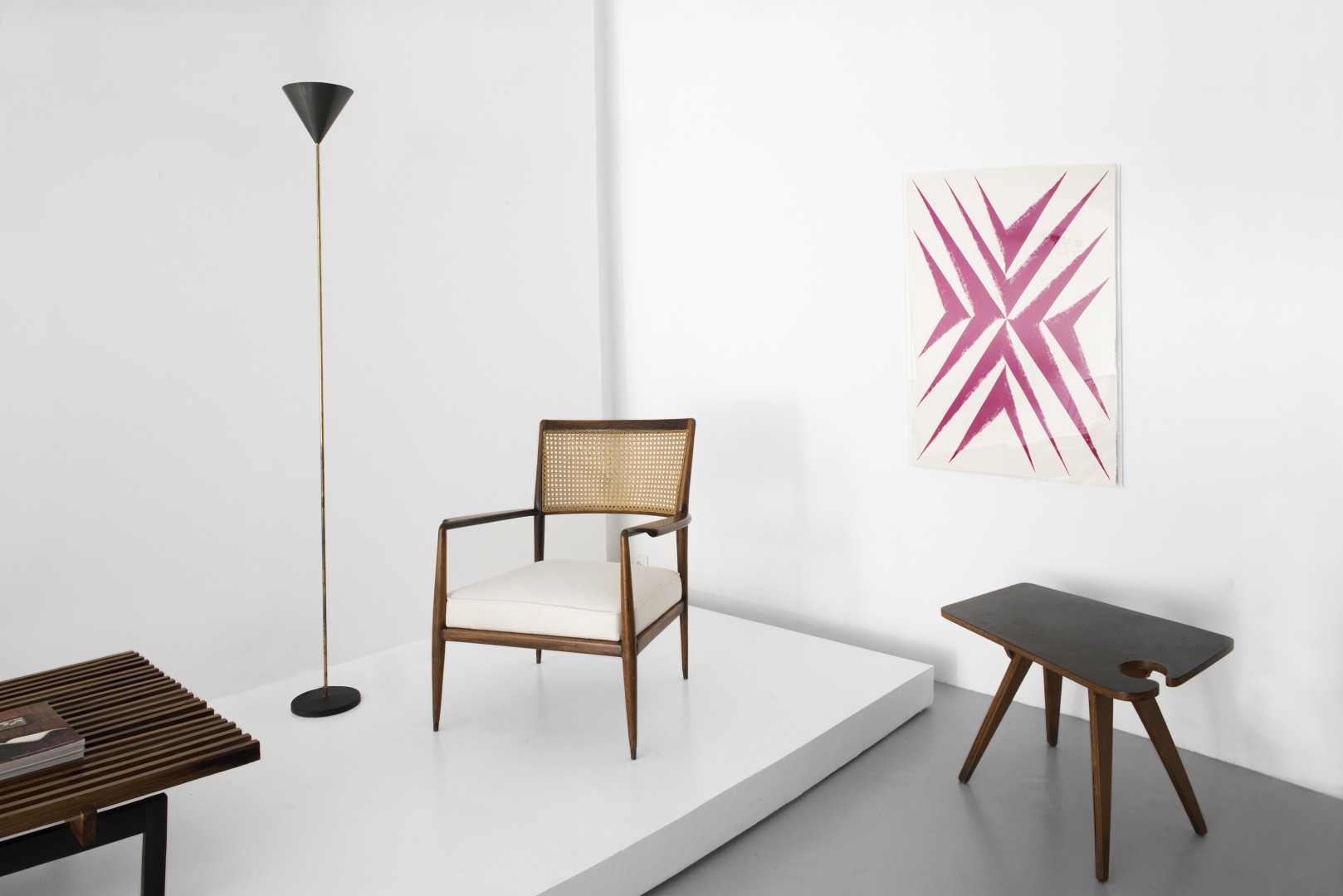 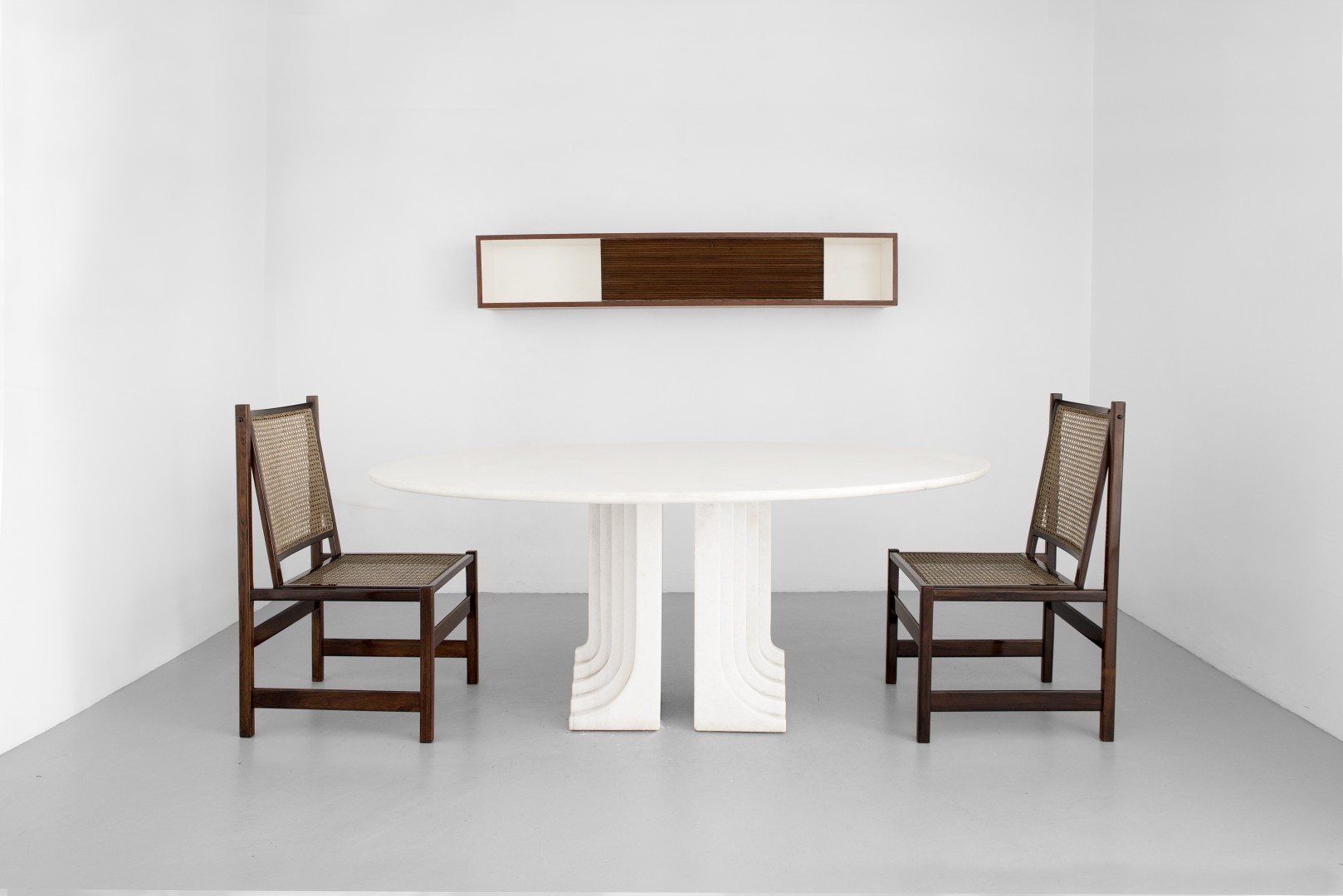 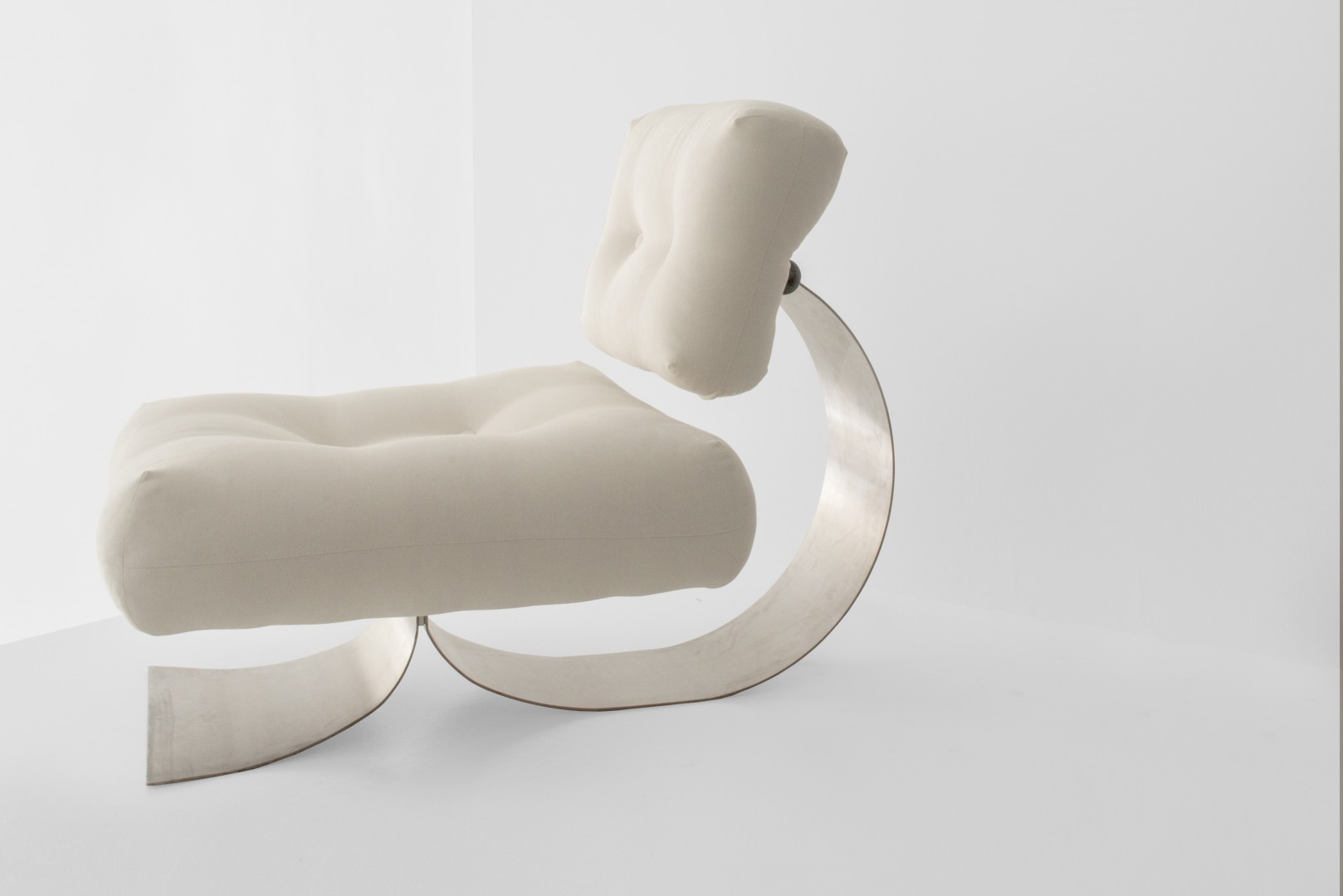 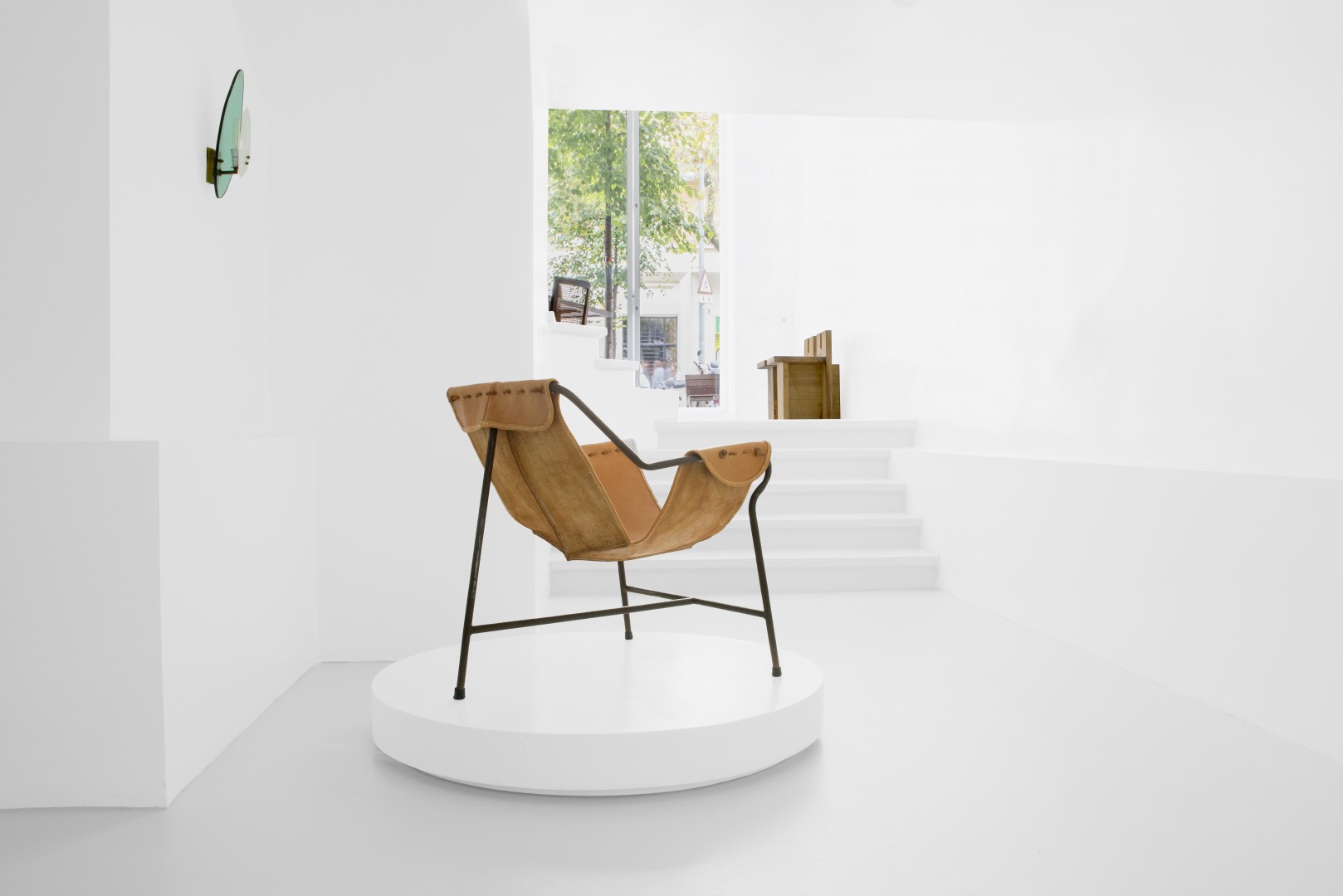 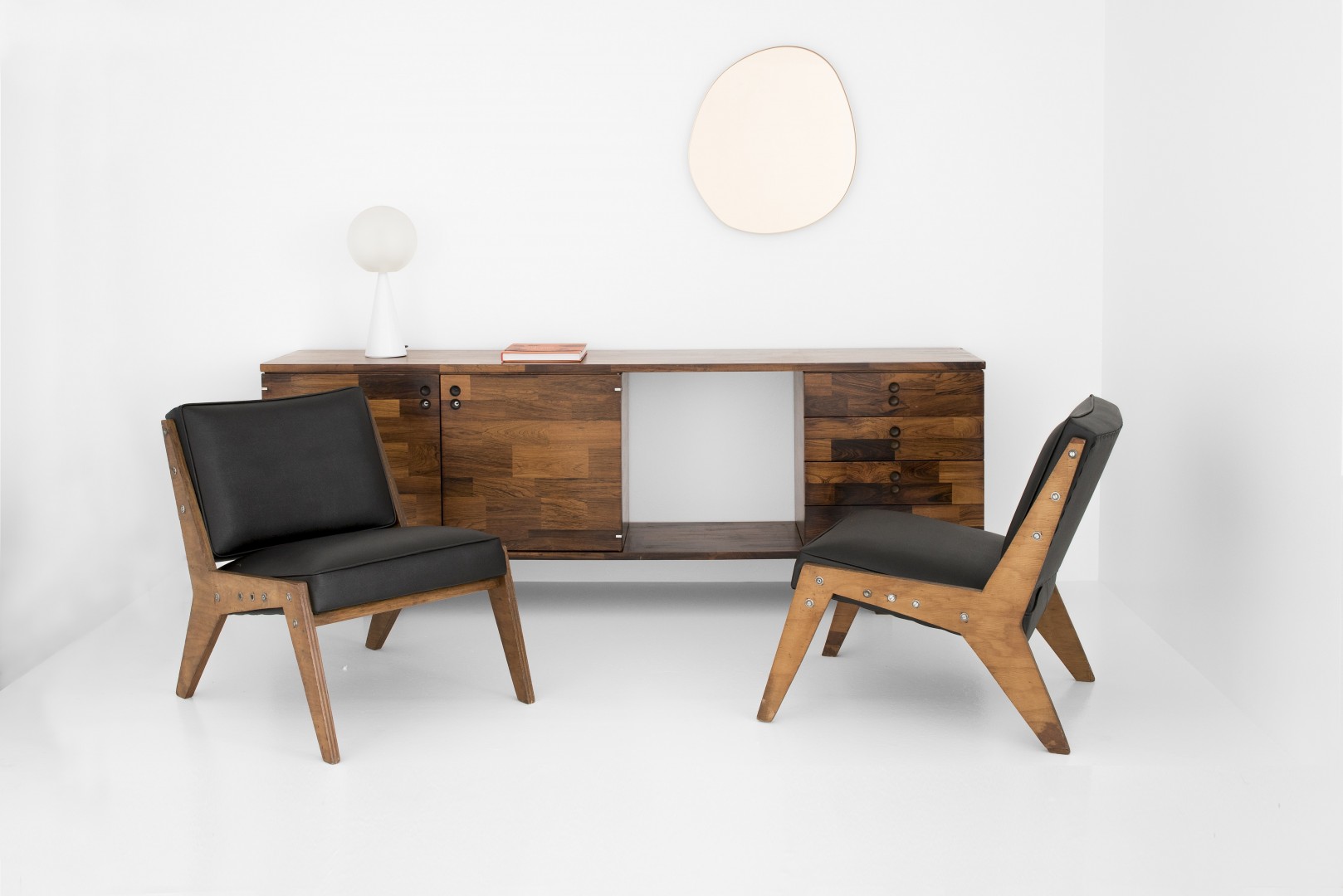 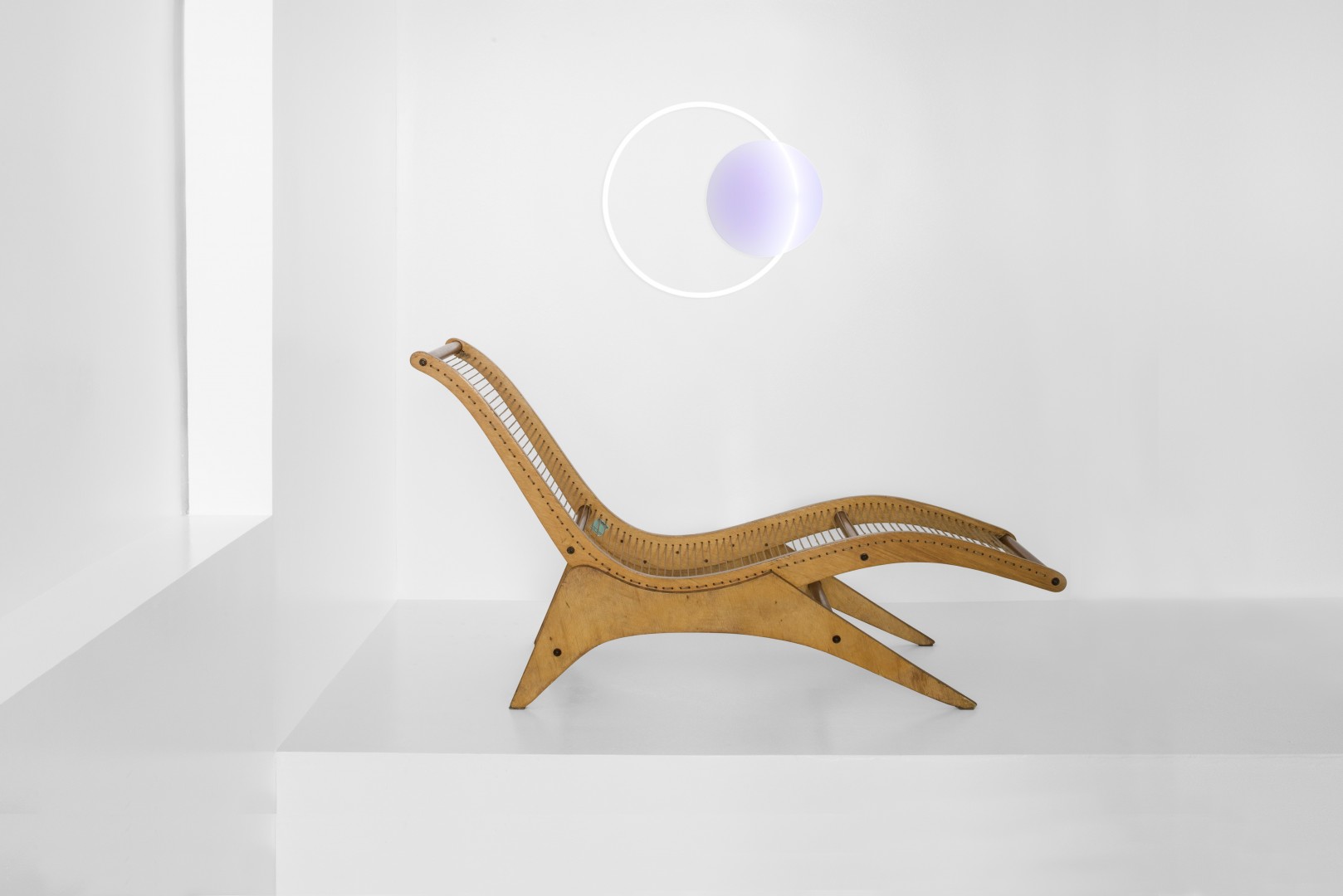 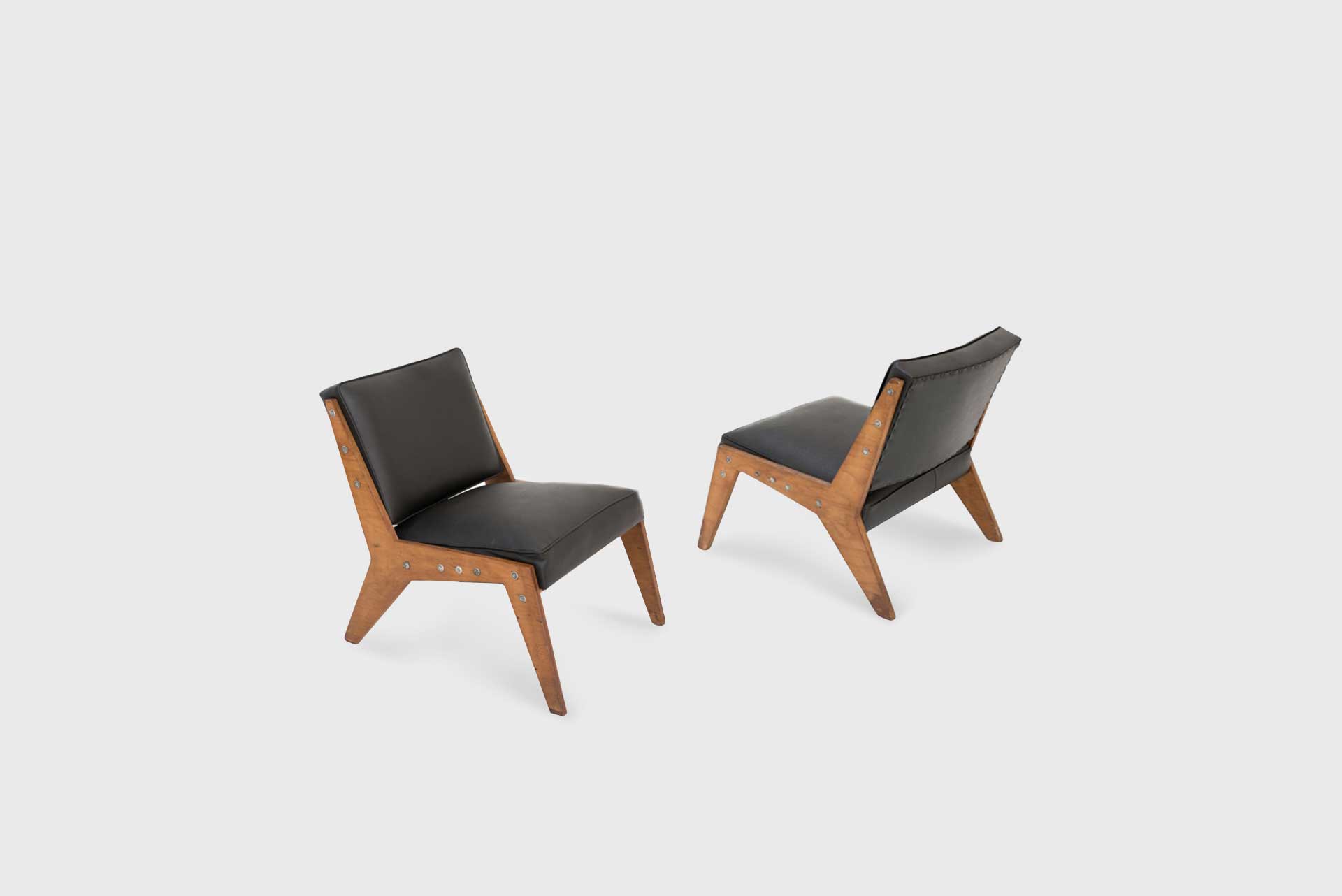 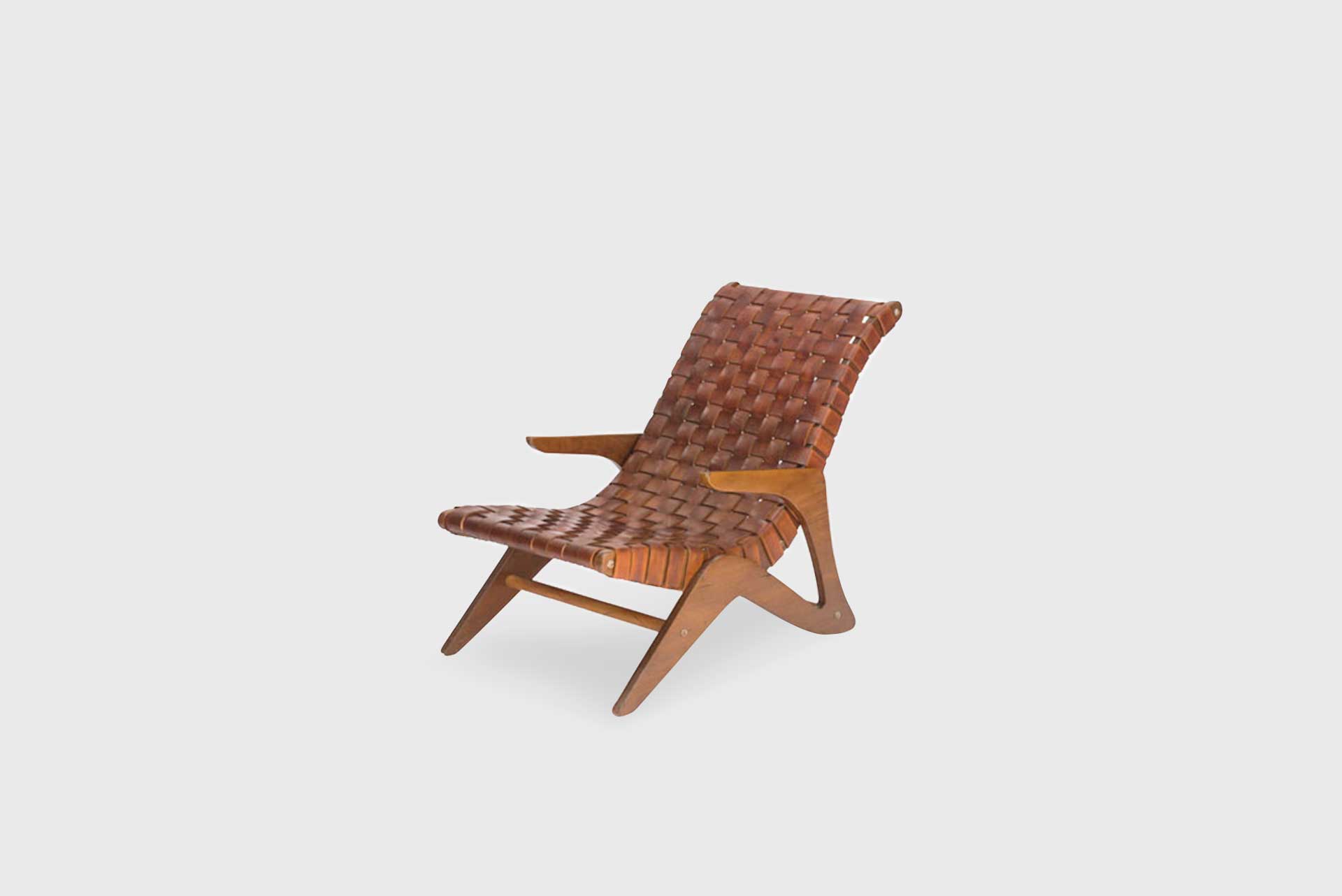 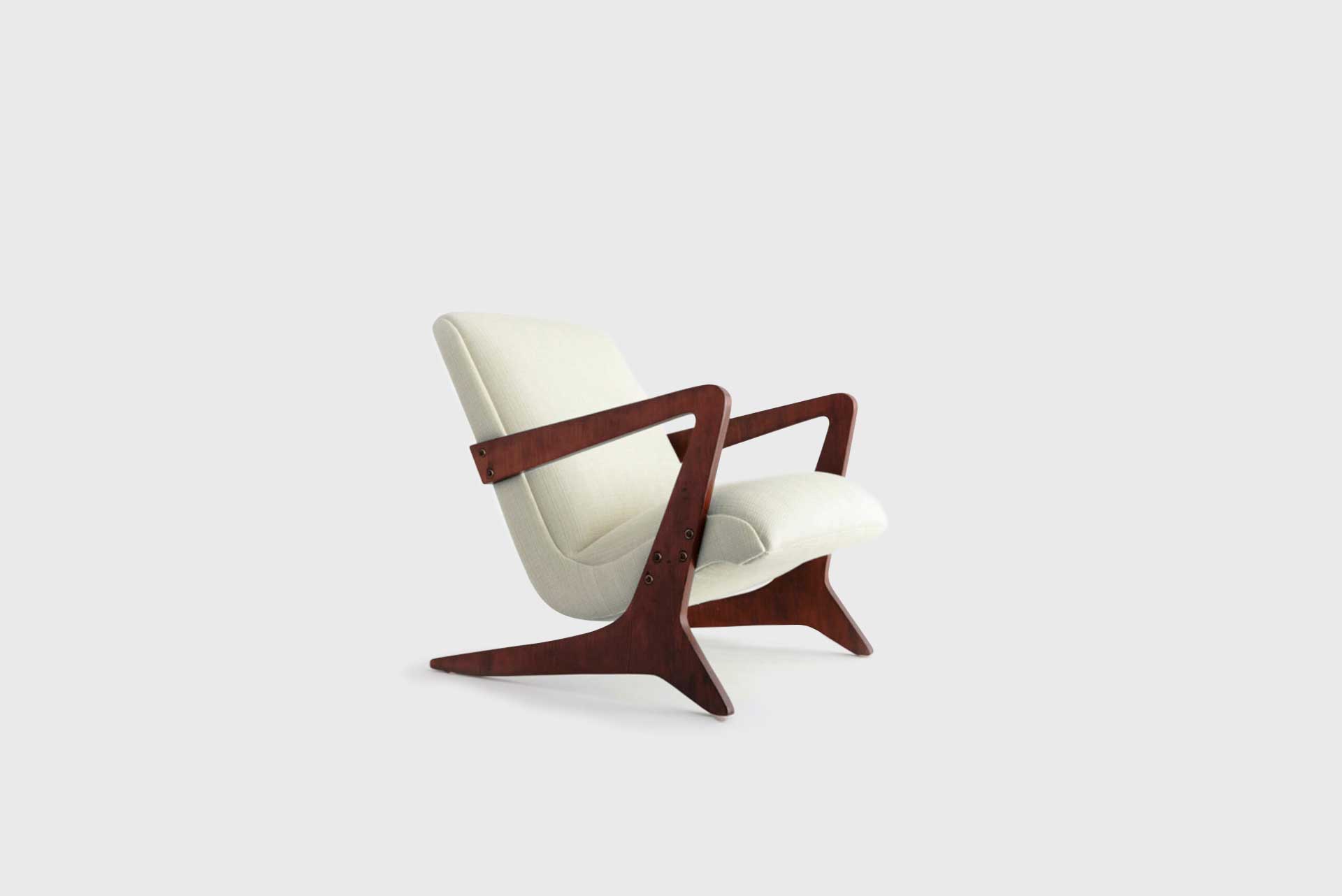 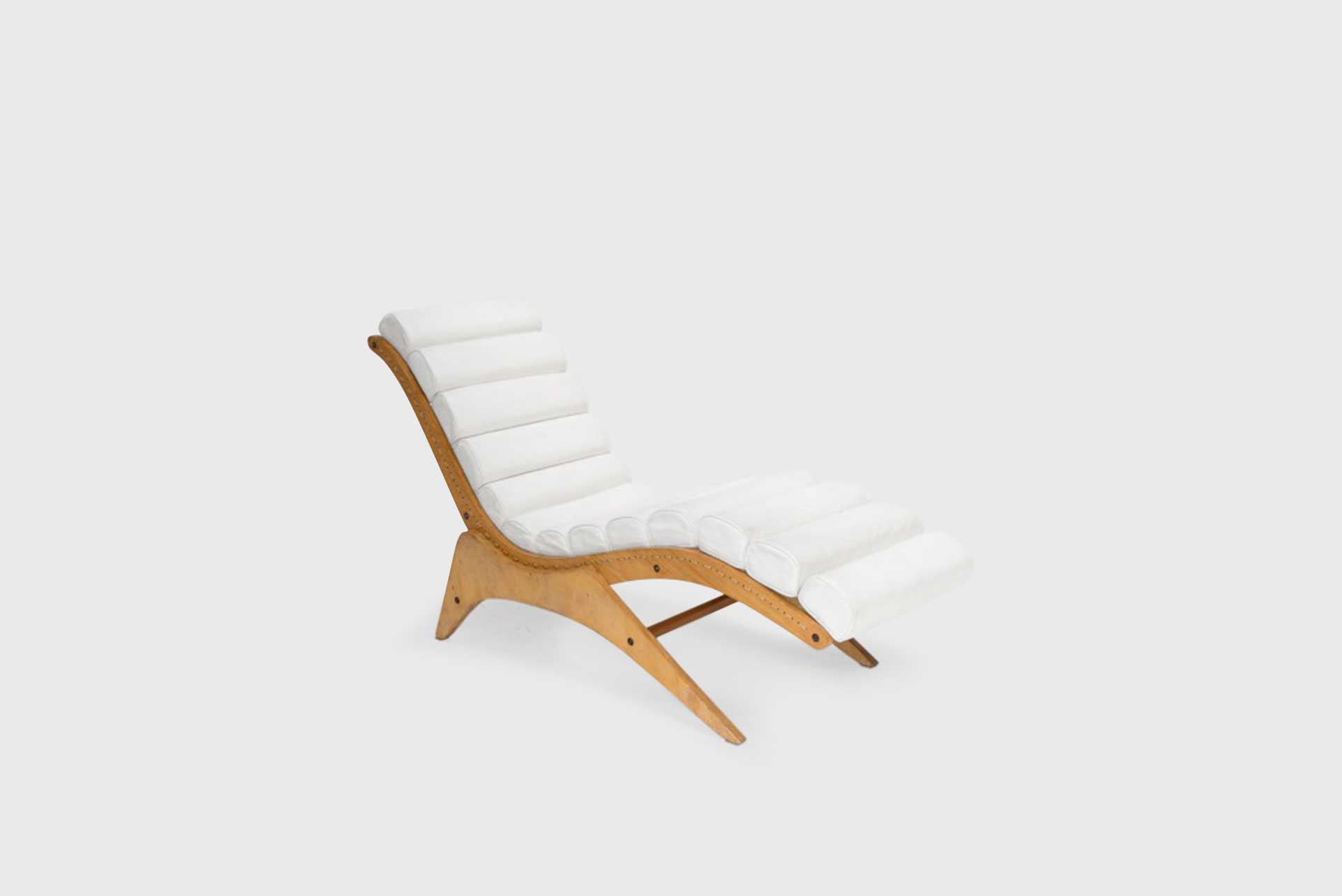 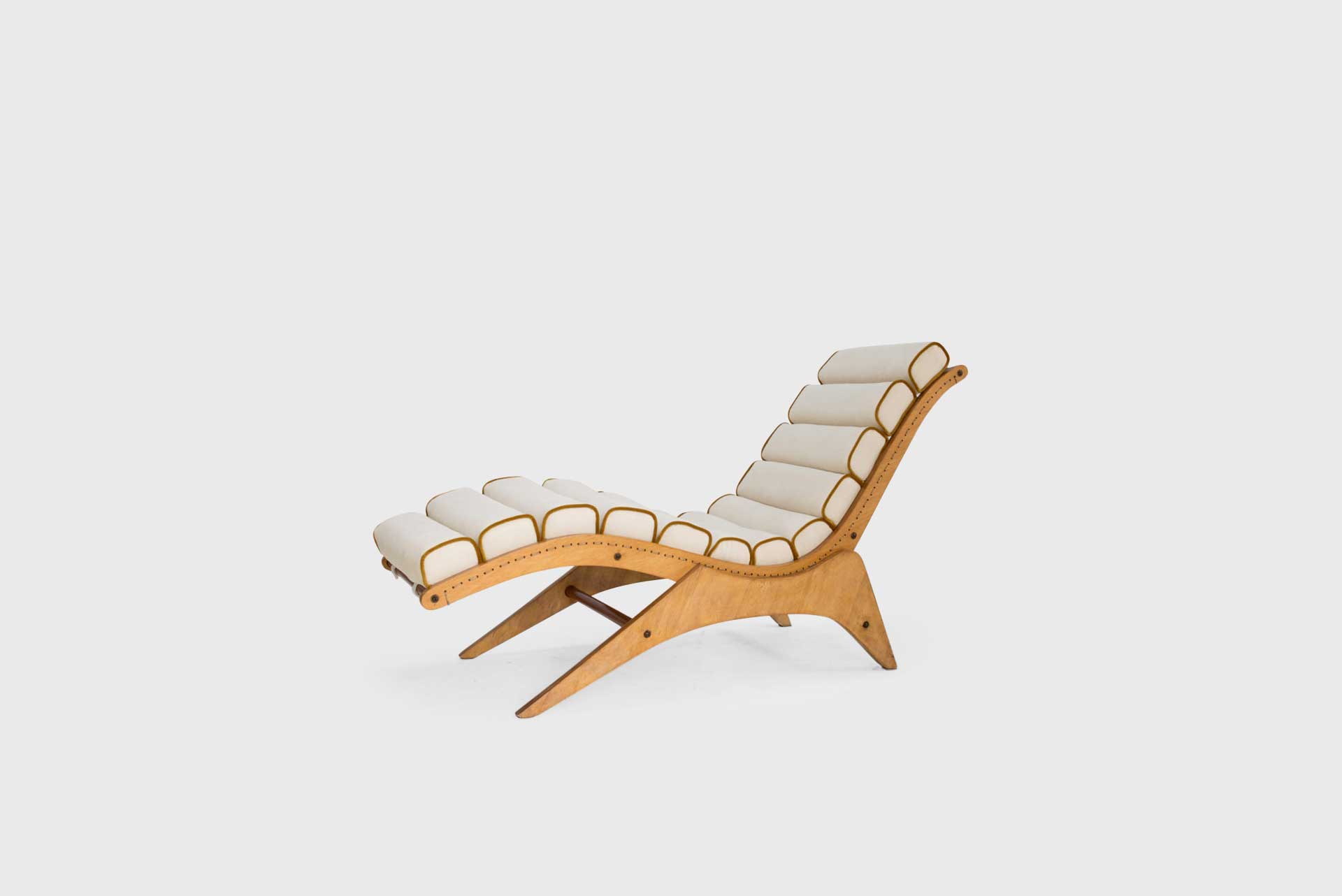 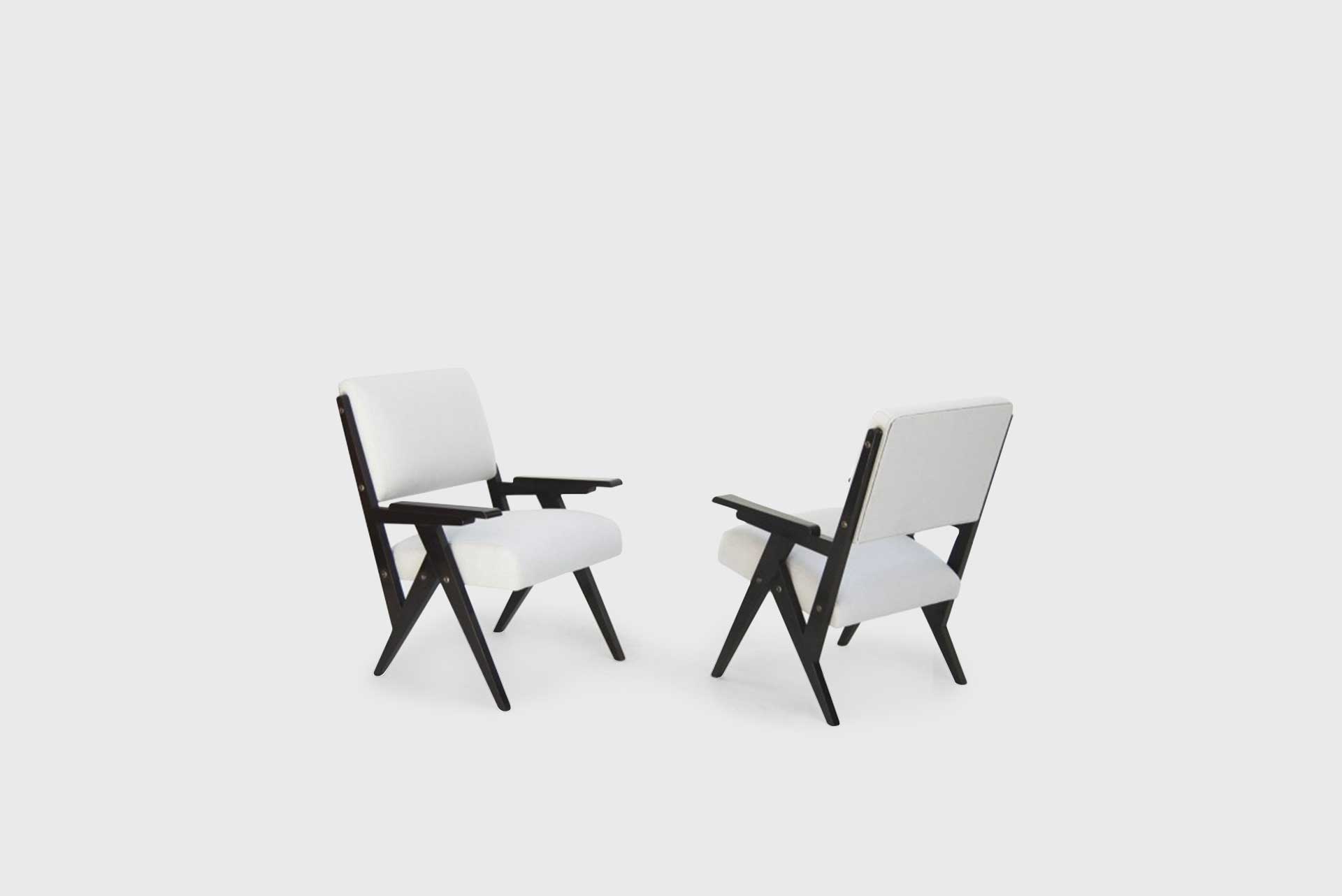 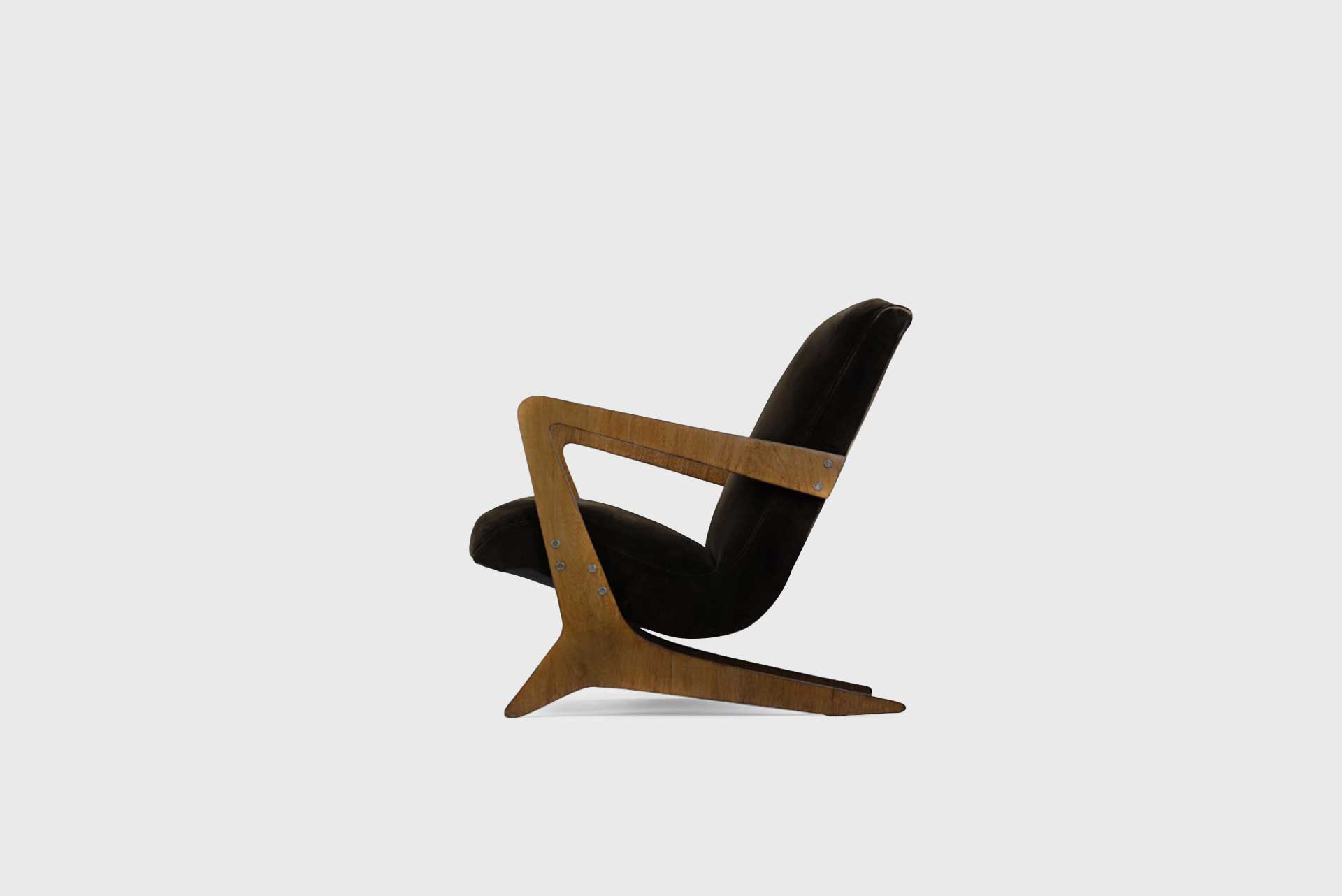 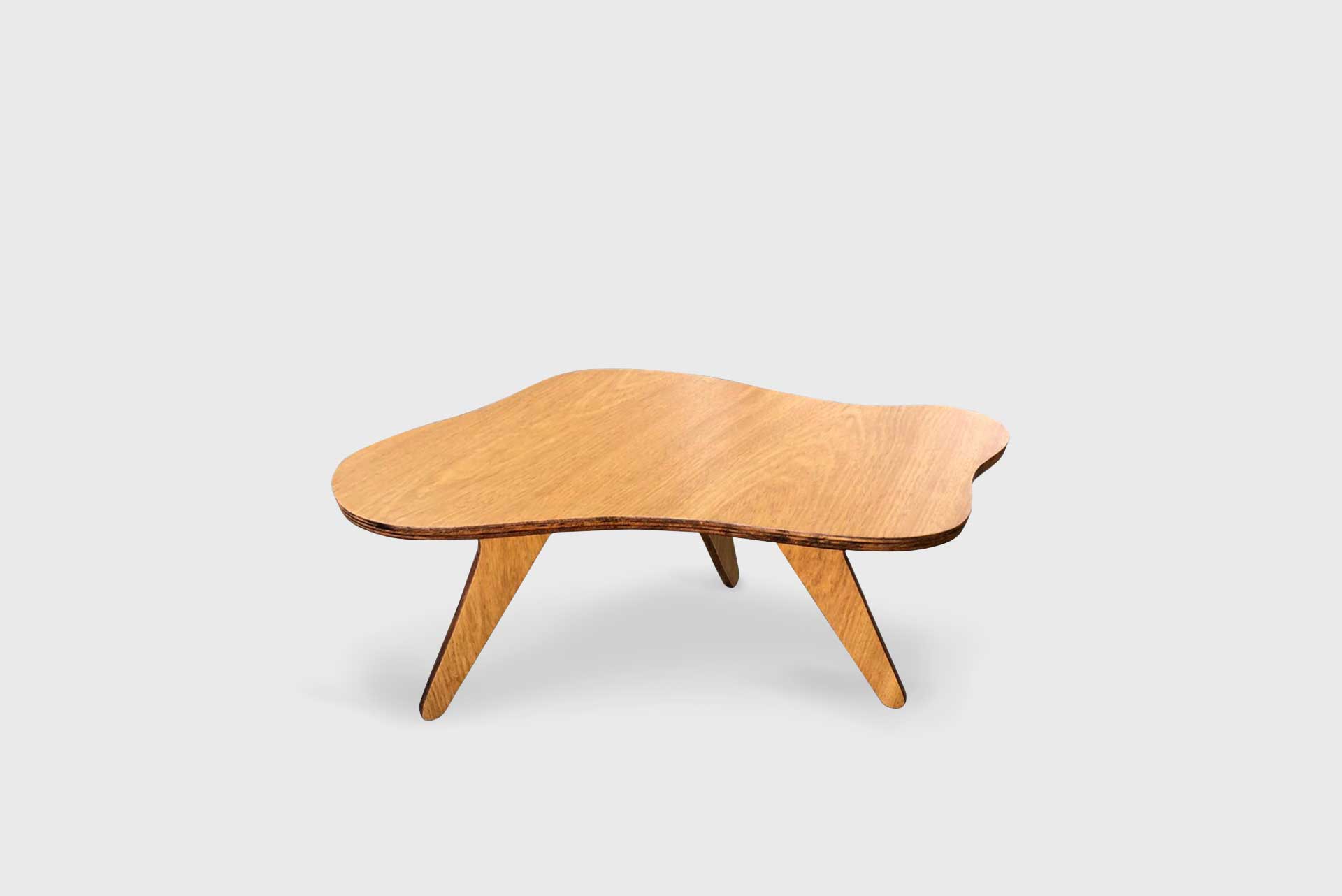 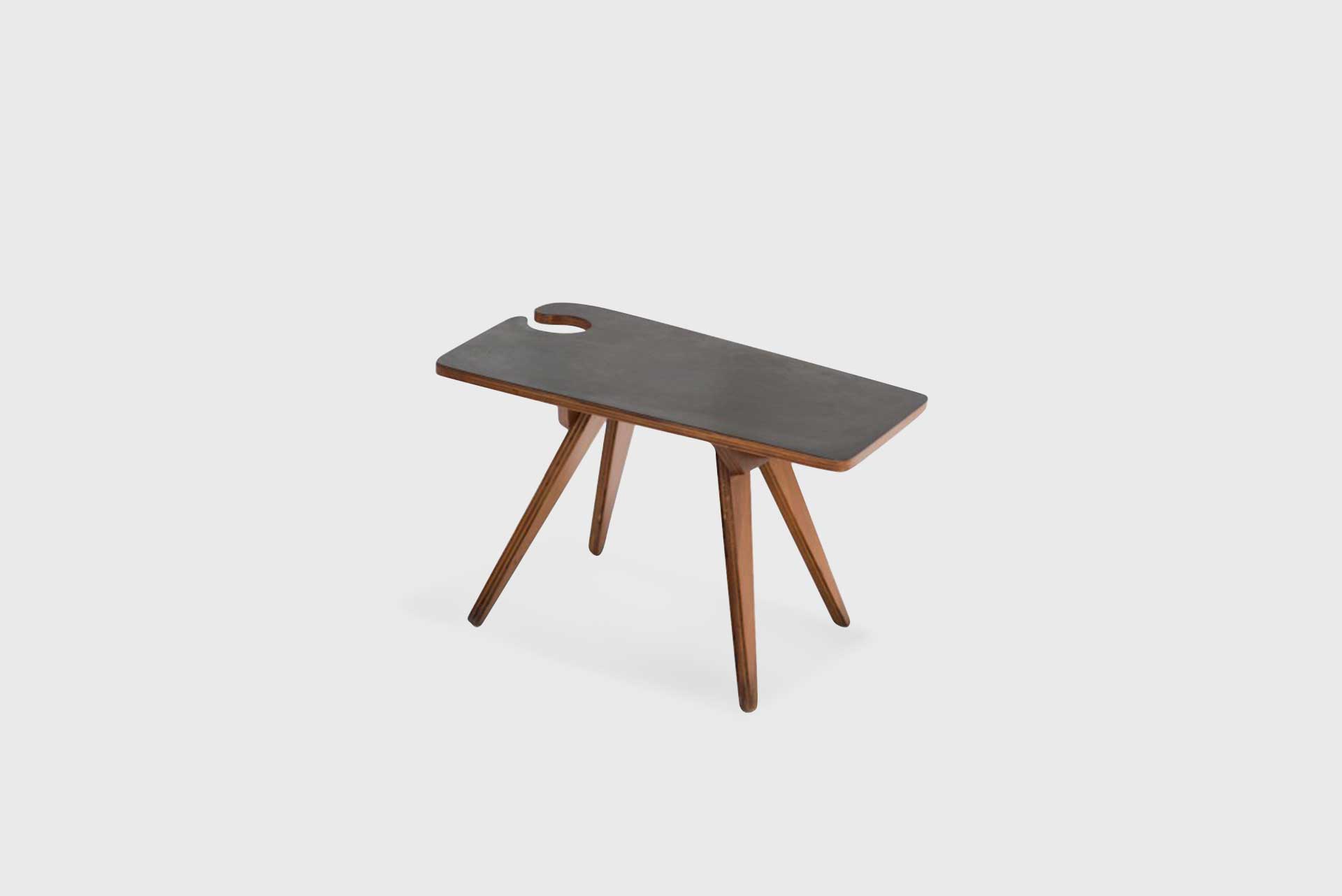 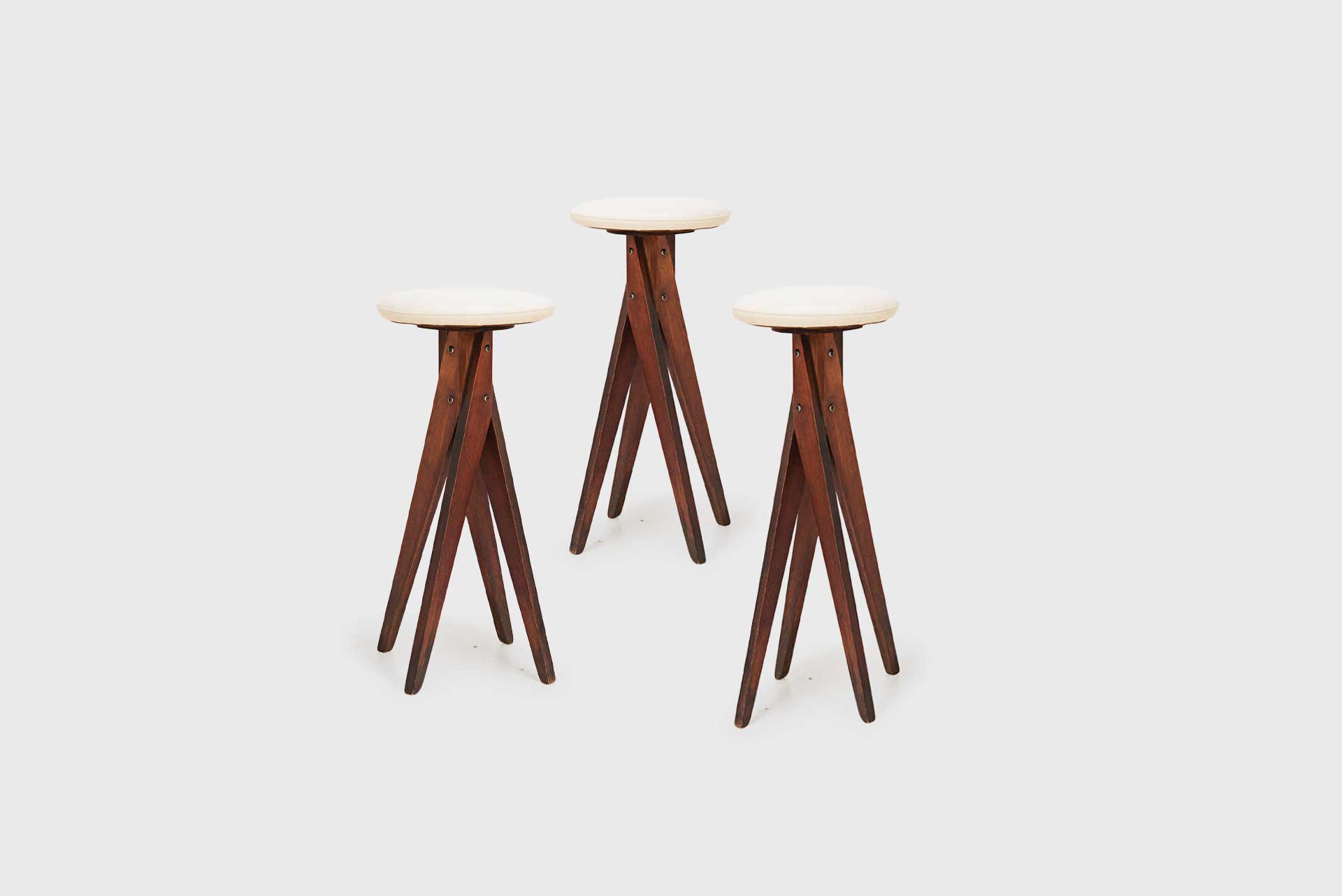 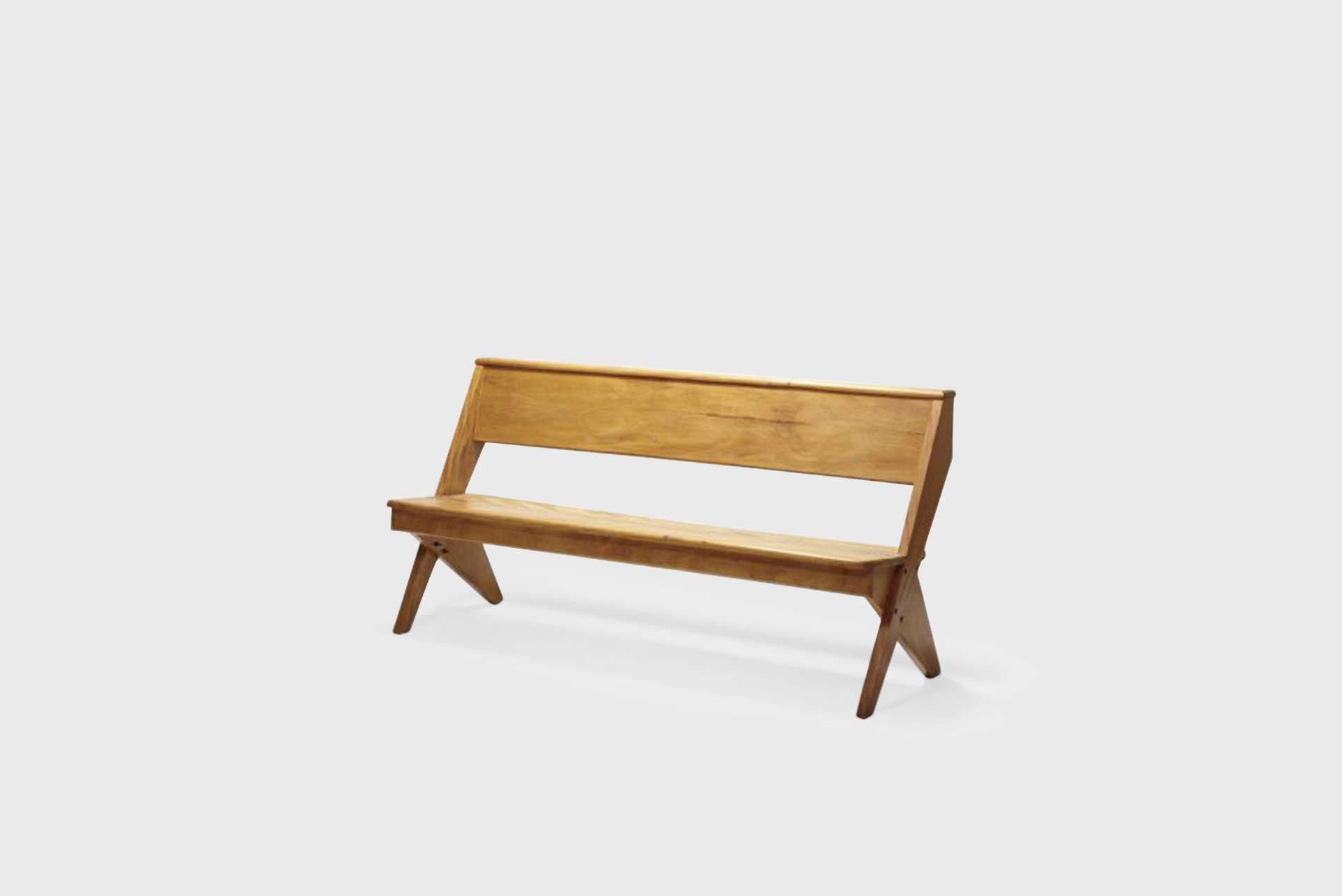 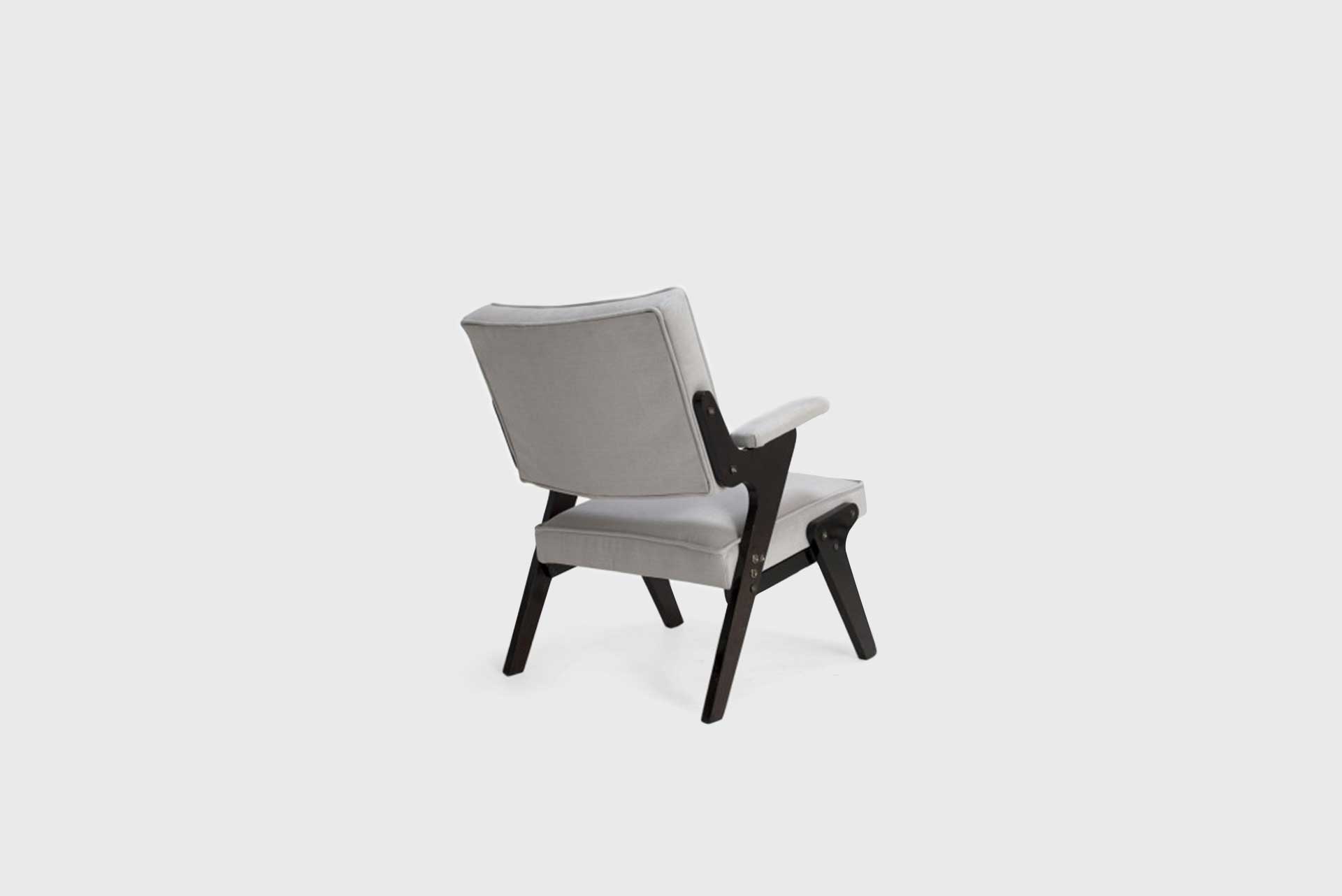 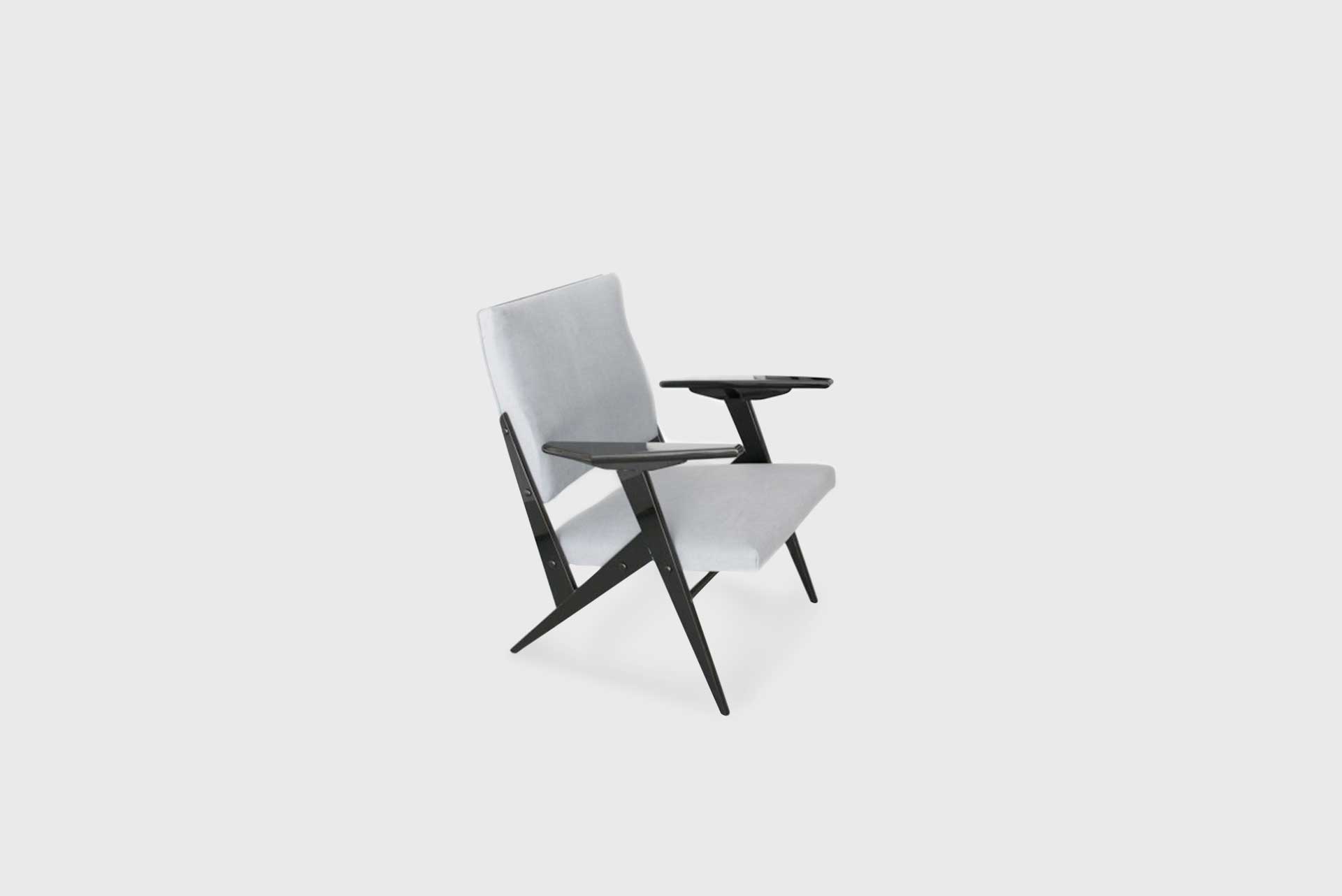 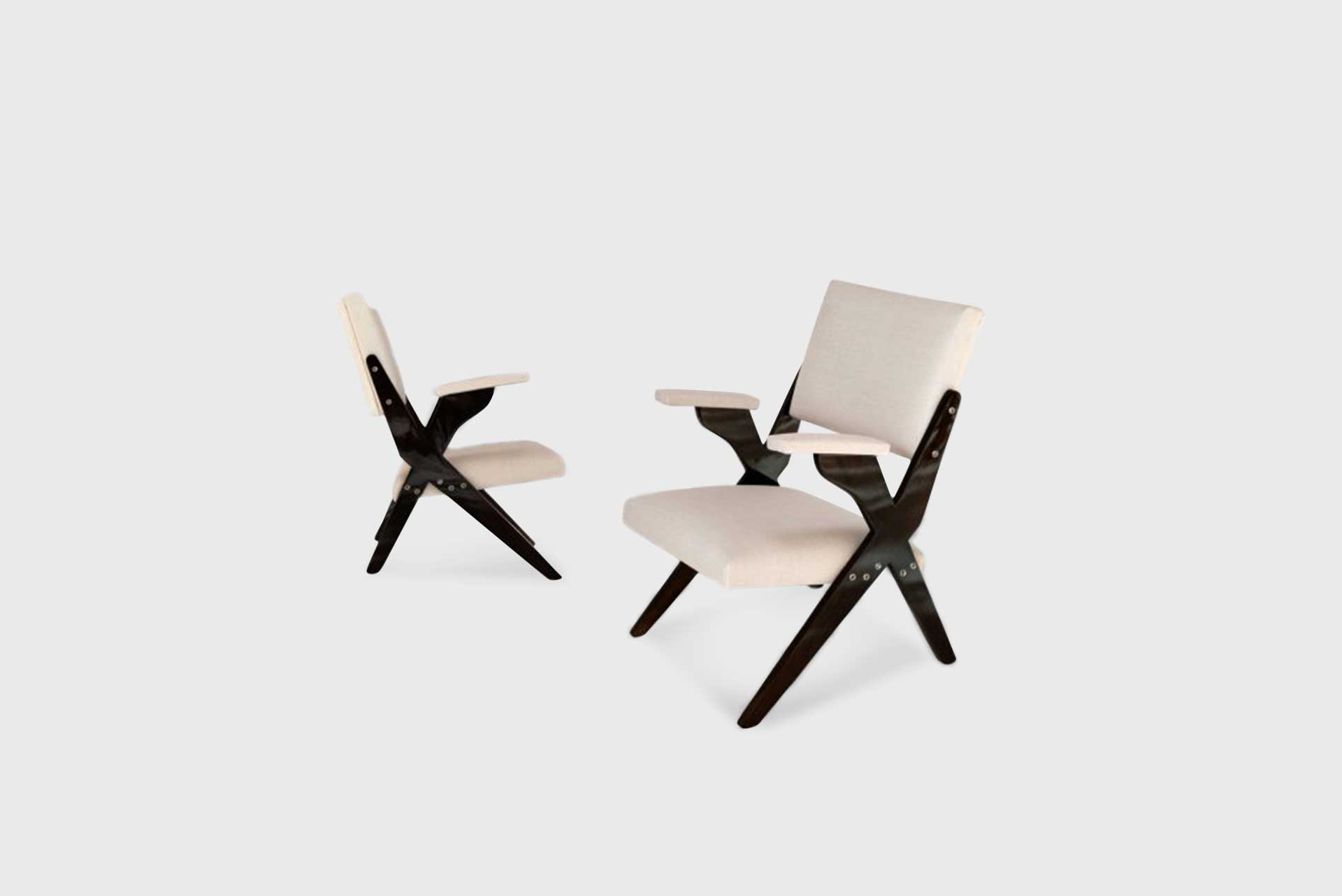 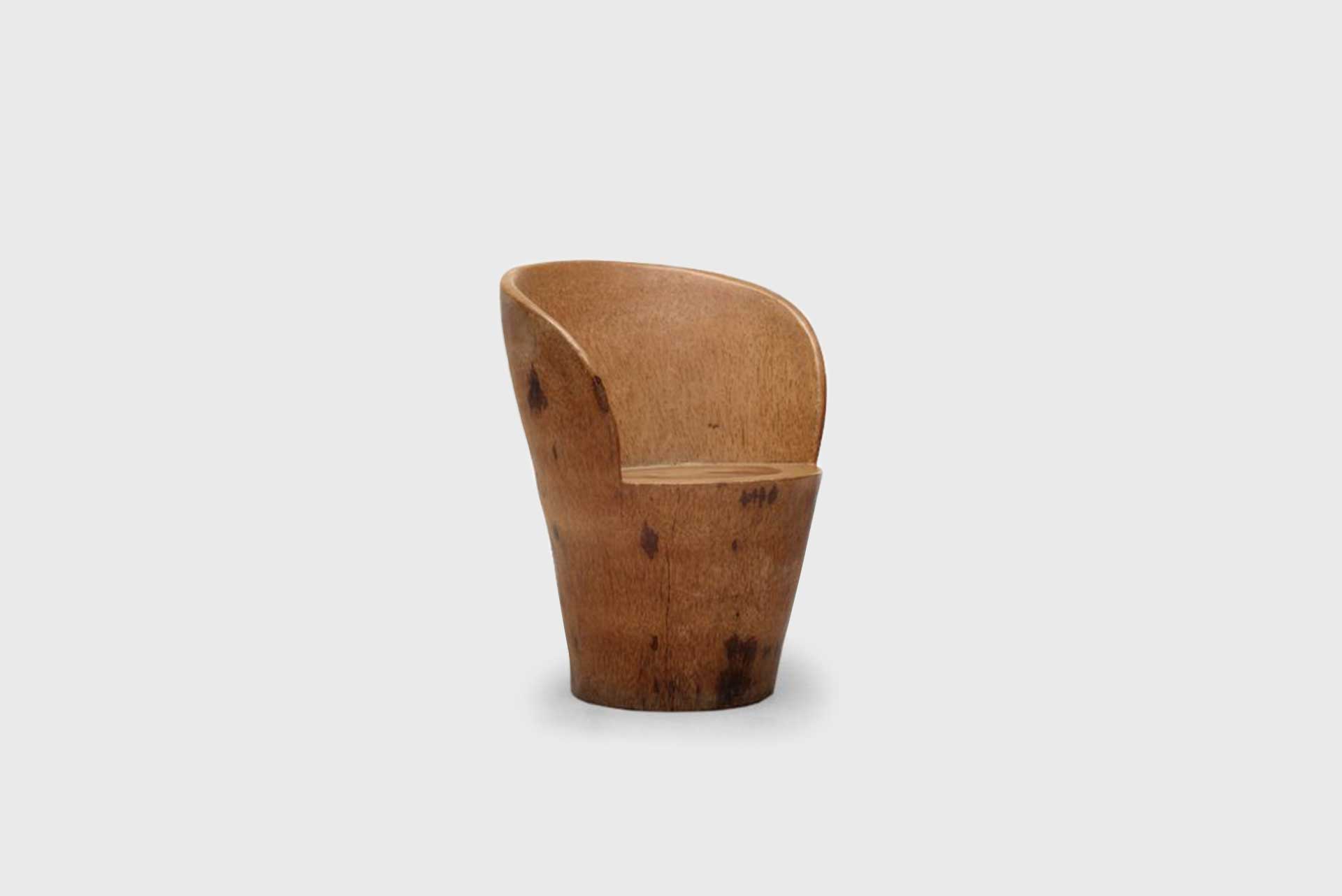