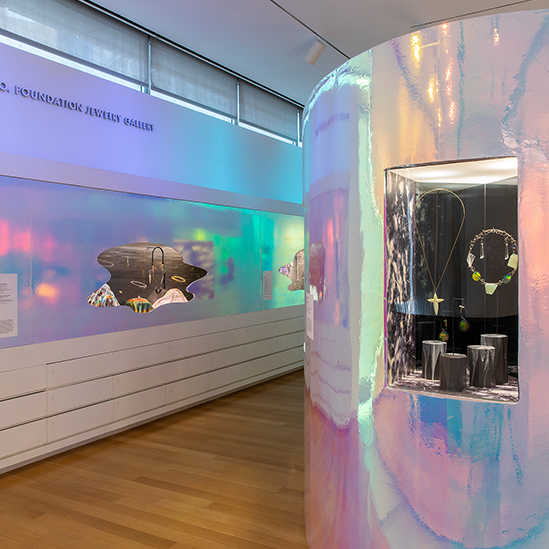 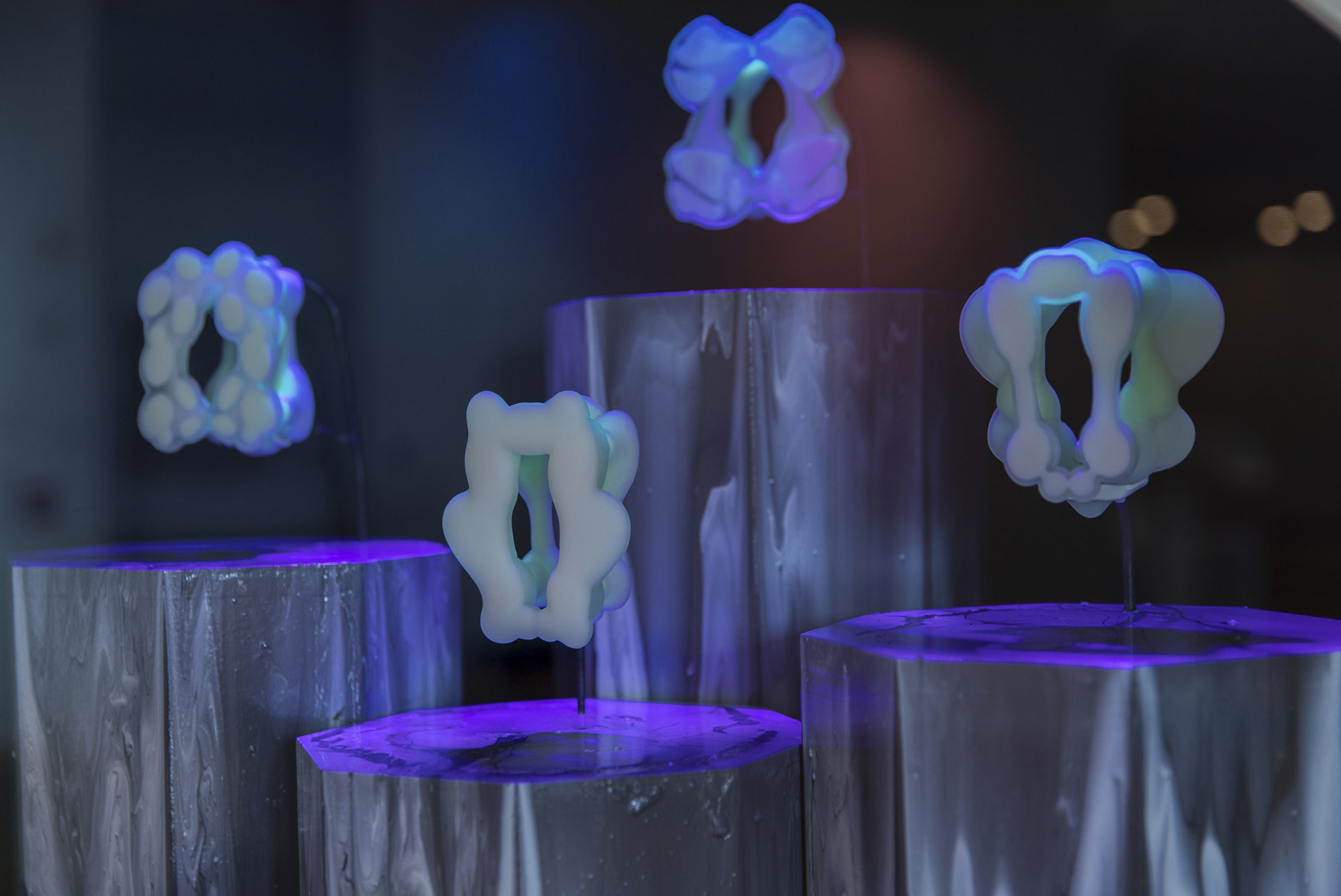 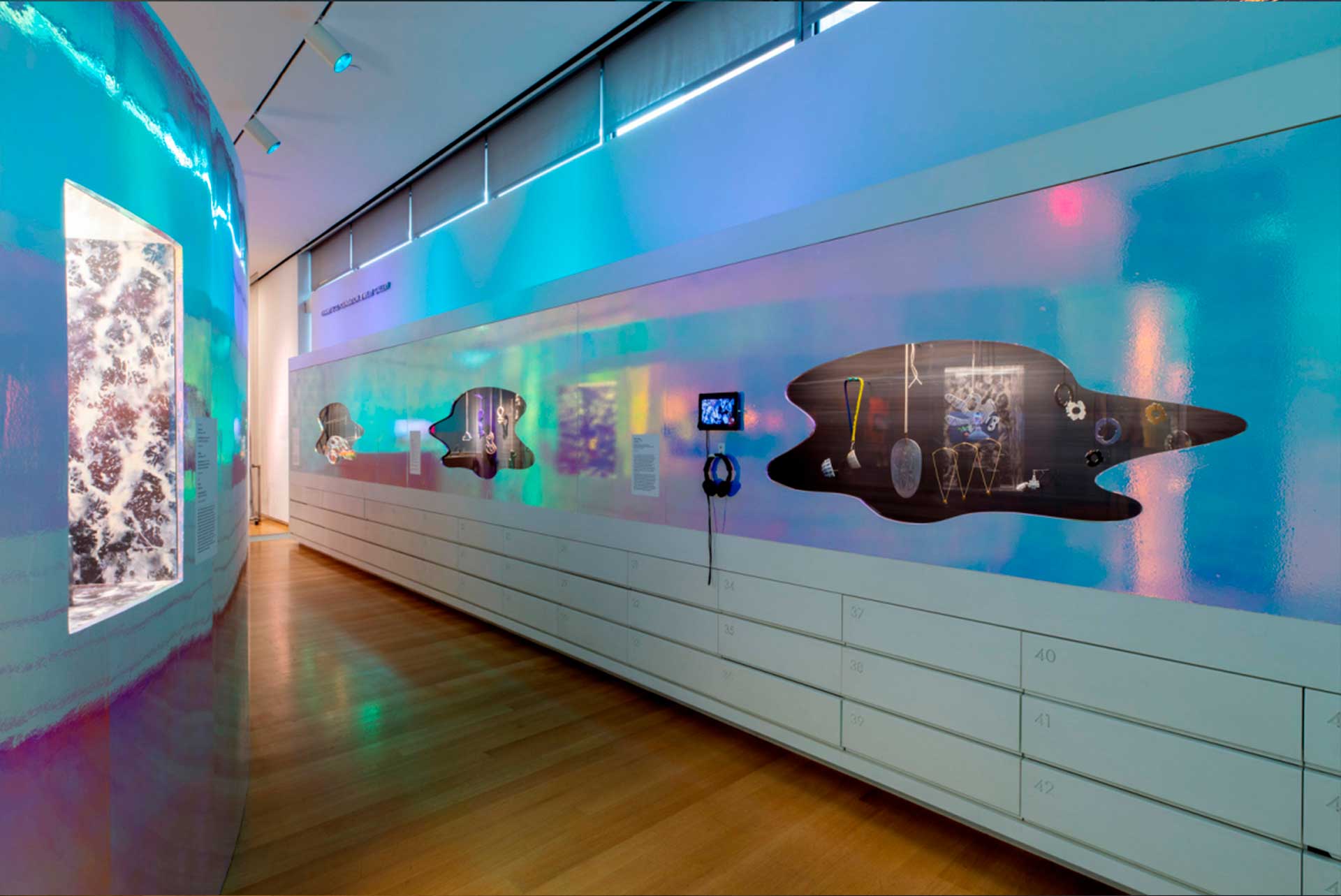 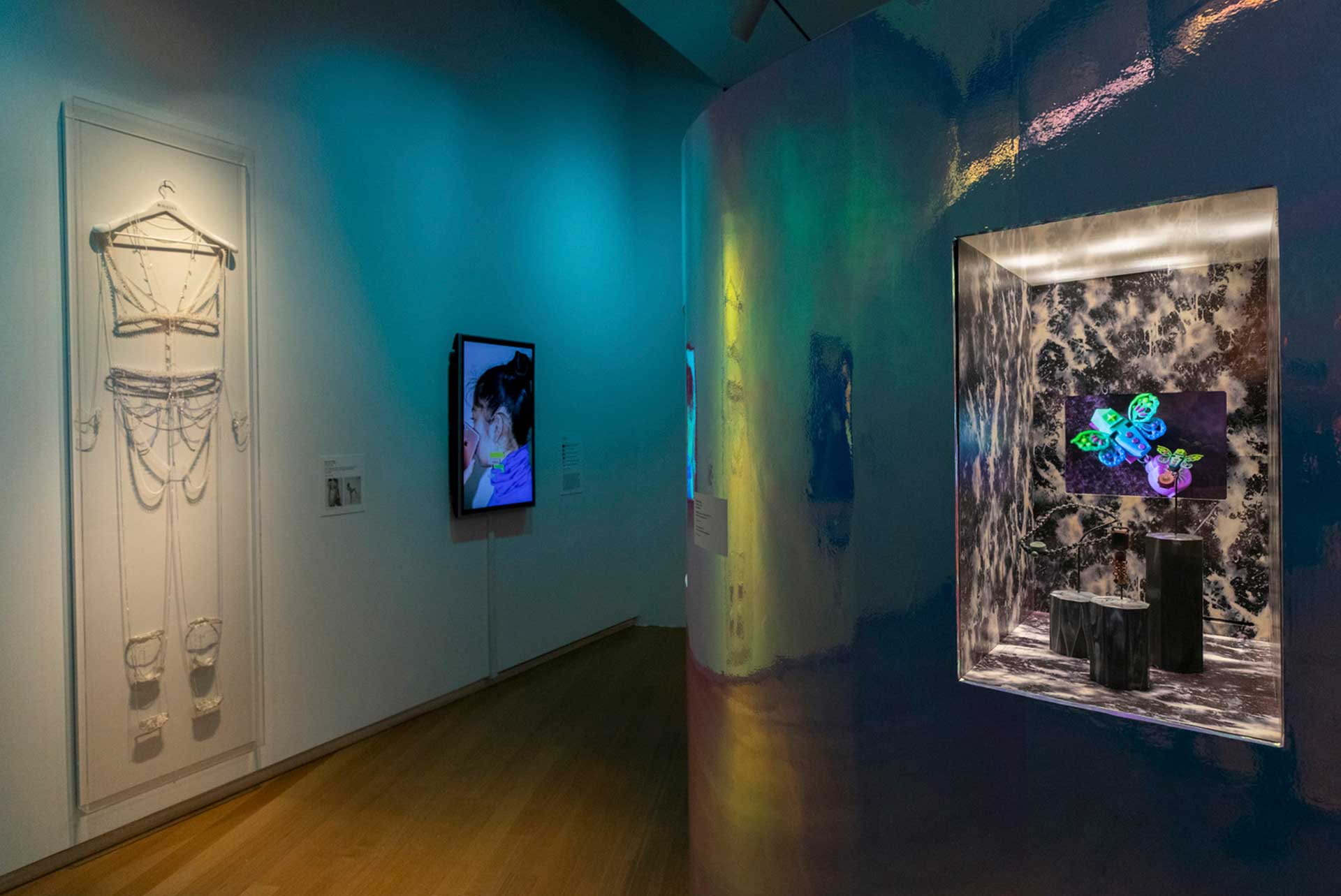 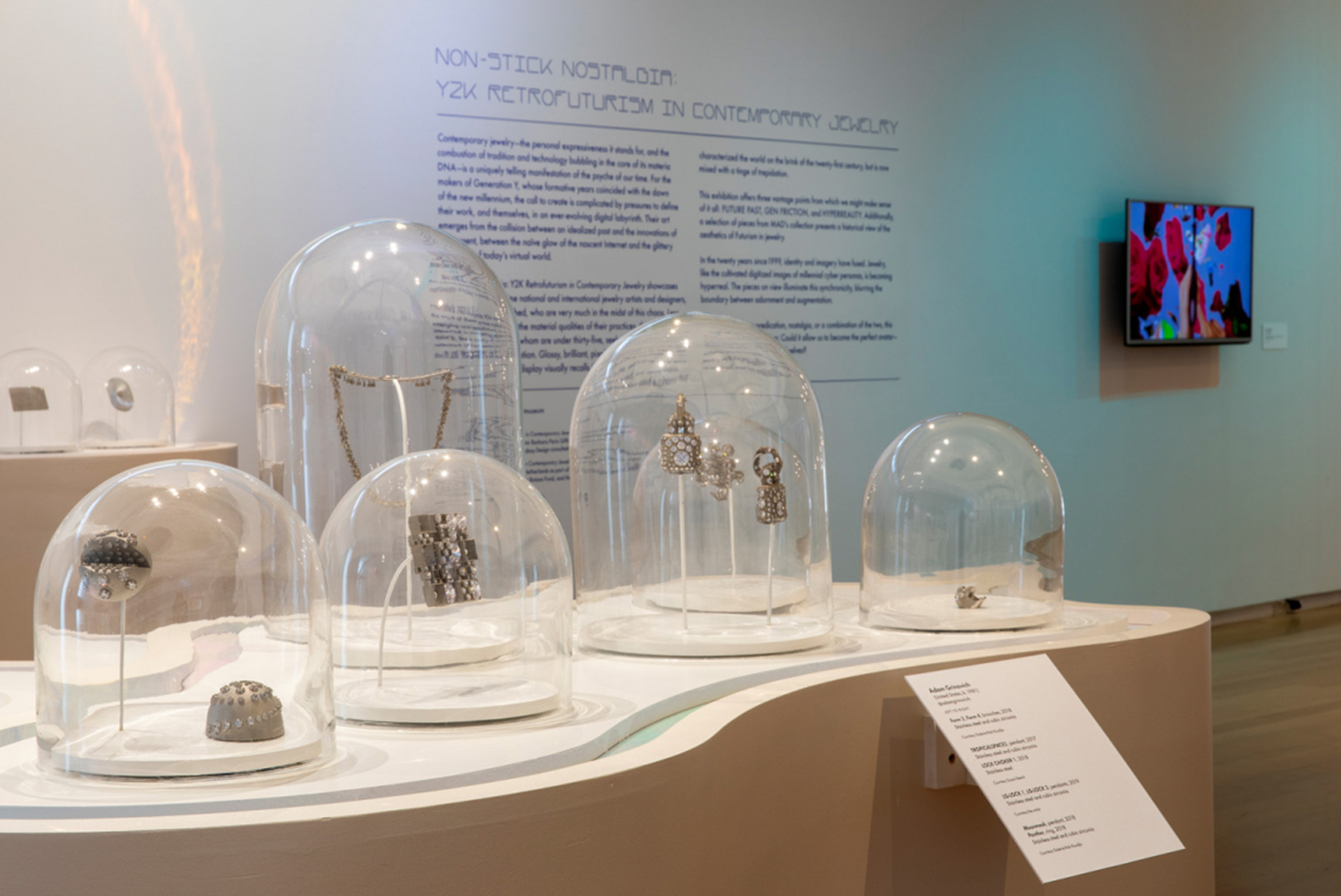 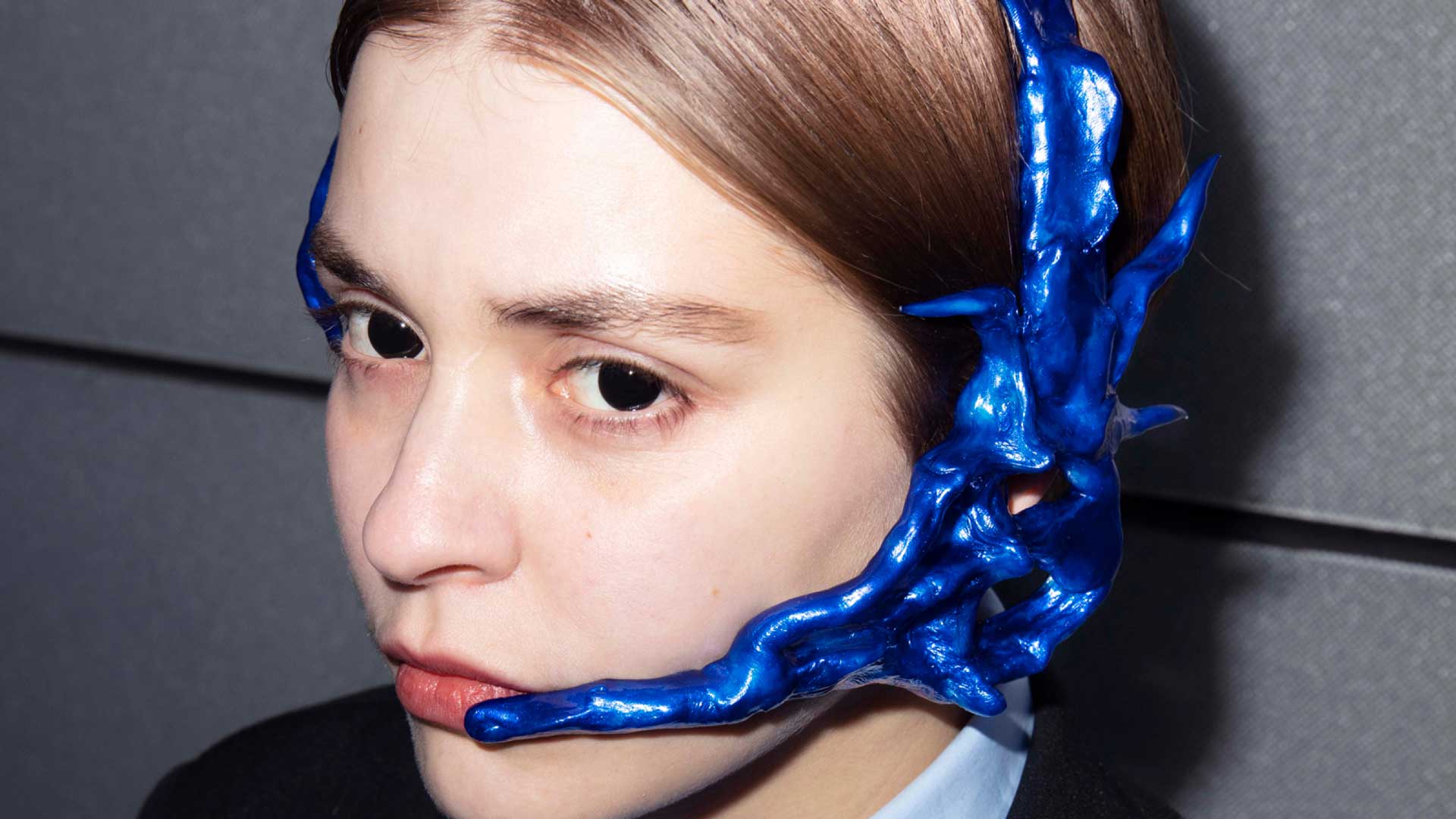 The world rocked to the foothold of the year 2000. In the naive glow of the primitive Internet, the promises of the future were dreamed of, extended, and tremendously aestheticized. Floating and iridescent, virtual and galactic, a new visual reality infiltrated the era, making the future tangible.

It was the teenagers who absorbed these images. In their rooms after school, they dialed and connected, curiously navigating the digital frontier. They began to piece together their personal identities, discovering at a record pace who they might become.

In the twenty years since then, those youthful explorations have turned inward and prioritized themselves. Today, we are faced with image oversaturation, URL / IRL hybridization, device dependency, over-sharing, a kind of gleaming narcissism. Self-actualization has become open source; individuality, generated by the user. Millennials have been raised cyborg. They know they are being seen. 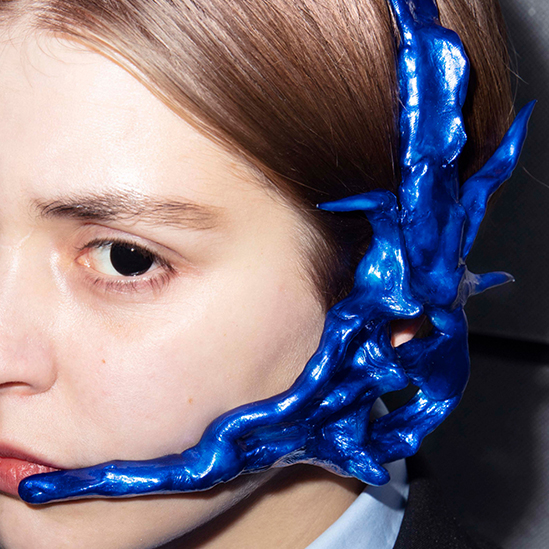 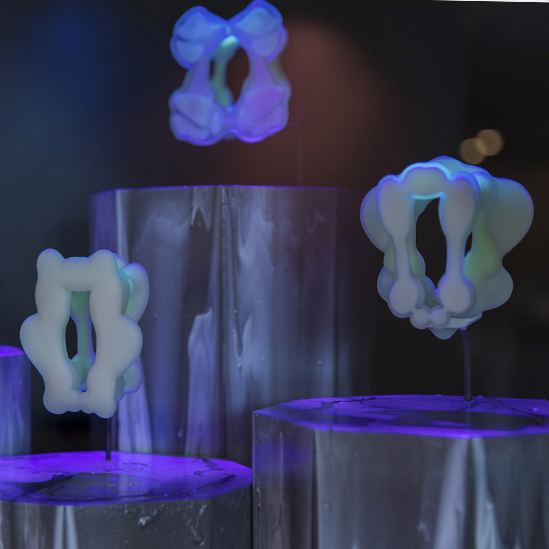 Contemporary jewelry, the personal expressiveness it represents and the combustion of tradition and technology that bubbles at the core of its material DNA, is a unique and revealing manifestation of the psyche of our time. Nonstick Nostalgia: Y2K Retrofuturism in Contemporary Jewelry highlights the work of twenty-nine international artists exploring the friction between analog and digital. The exhibition also includes a selection of pieces from MAD's permanent collection that present different interpretations of futurism in jewelry. The contemporary pieces presented channel a plastic and pixelated, vibrant and bright, amorphous or chrome aesthetic, which echoes the post-nascent Internet culture that has evolved since the dawn of the 21st century. Like the digitized cultured images of millennial cyberpersons, the jewels have gone hyper-realistic. Together, they are in idyllic synchronization.

Whether born out of preaching, nostalgia, or a combination of the two, jewelry acts as a proposition: Could it allow us to become the perfect avatars: our fullest and fully realized self?

Since 1956, MAD has collected and displayed innovative studio and contemporary jewelry that stands at the intersection of art, craft and design and challenges the limits of the medium. This exhibition exemplifies the Museum's continued dedication to supporting emerging and established jewelry artists and new concepts that evolve understanding of the field.

Nonstick Nostalgia: Y2K Retrofuturism in Contemporary Jewelry is curated by Kellie Riggs with the support of MAD Deputy Director of Curatorial Affairs Angelik Vizcarrondo-Laboy. It was secured for the Museum by assistant curator Barbara Paris Gifford. Design Consultation by Misha Kahn. 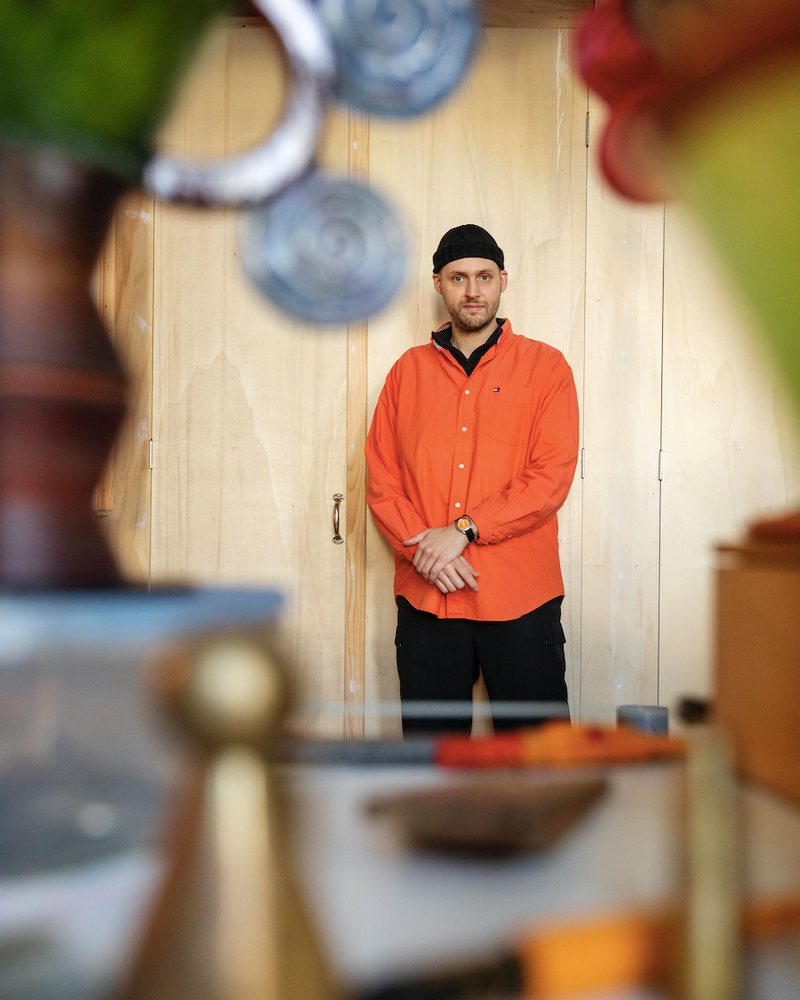 Boris de Beijer trained as a jewelry designer at the Rietveld Academie in 2011. Since graduating, he has developed his practice in a multidisciplinary manner, without conforming to the boundaries of a specific discipline. Instead, he moves freely between sculpture and applied arts.

Craft techniques have always been central to his practice. He combines these traditional skills with more non-conventional methods, causing imminent surprises that mislead the spectators. His work's form and function are ambivalent, often provoking questions of hierarchical structures in contemporary art and design discourse.

Since his graduation in 2011, Boris has almost exclusively focused on working with synthetic and non-traditional materials. He has managed to develop his very own visual language within his field. Comparable to the peculiar processes of ancient alchemy, he transforms relatively cheap and common resources into new substances reminiscent of higher valued materials, such as glass, minerals, and metals. This way of working adds to the alienating otherworldly sensation his work tends to provoke.

In 2020 Boris came to a turning point in his career in which he began to investigate different and more traditional materials. Working closely with expert glassblowers from Amsterdam, he has started working on a new series of glassware made exclusively for Side Gallery. Boris has displayed his work in national and international galleries and cultural institutions. He has been included in various national collections such as Stedelijk Museum Amsterdam, The Coda Museum, and the MAD Museum in New York.