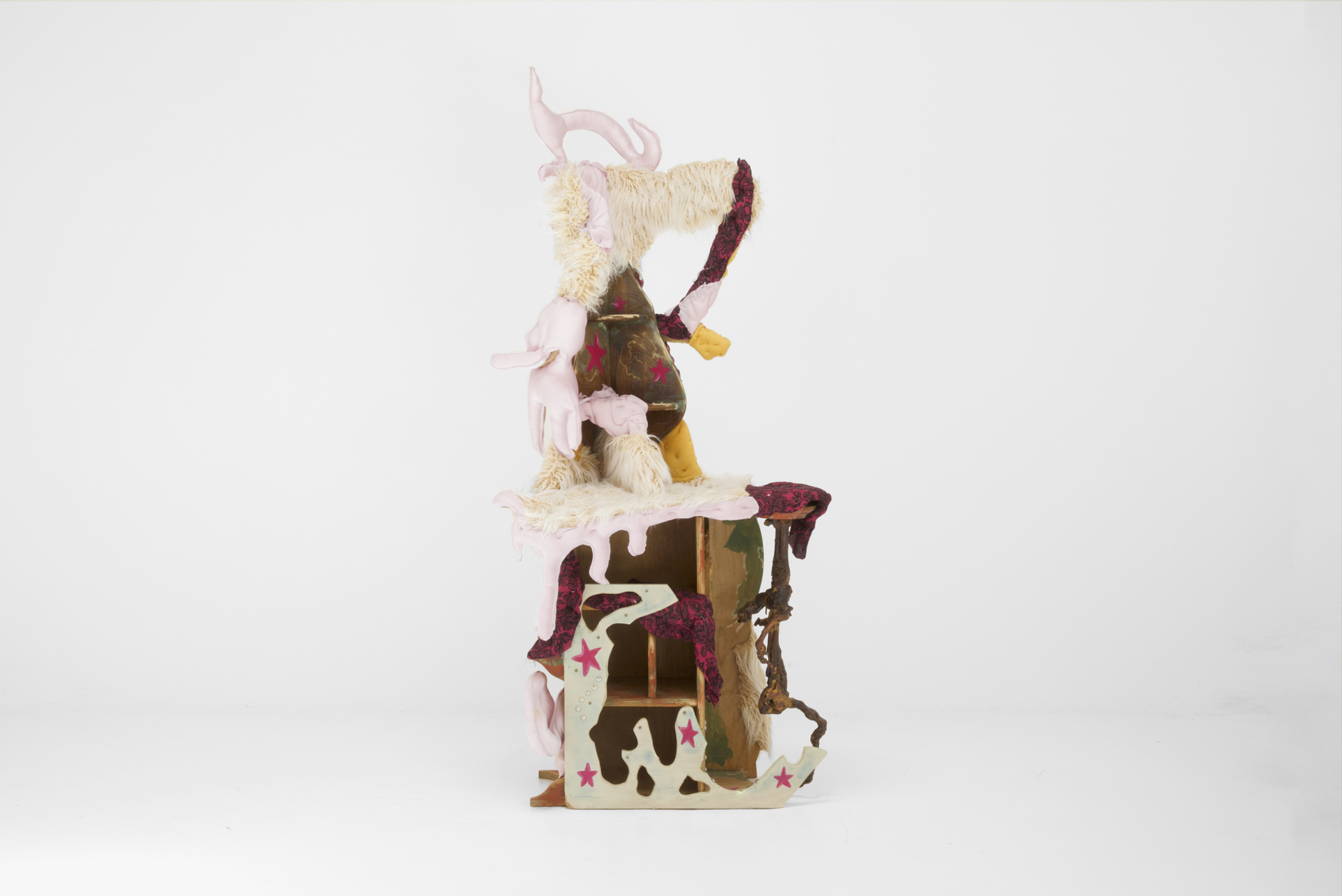 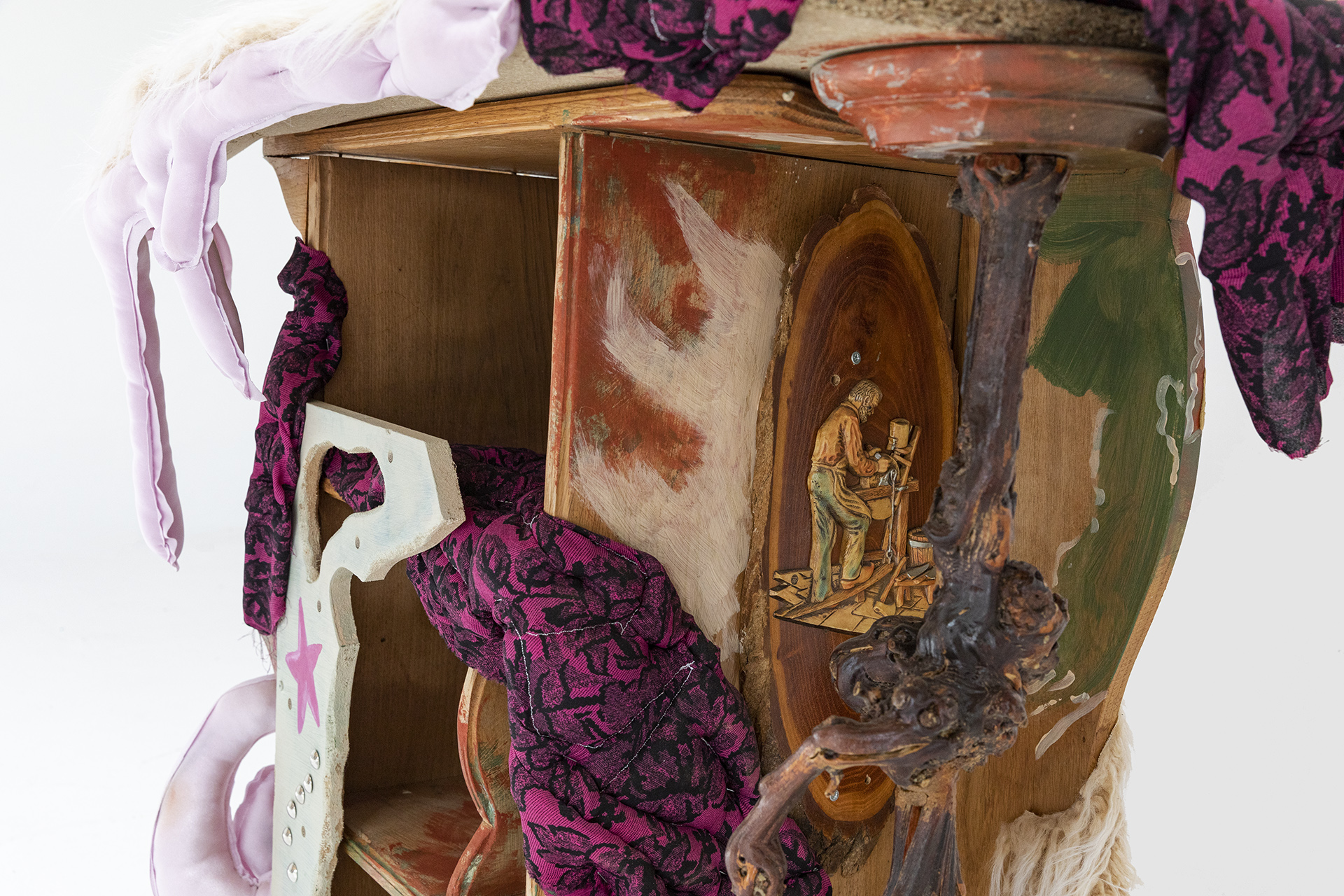 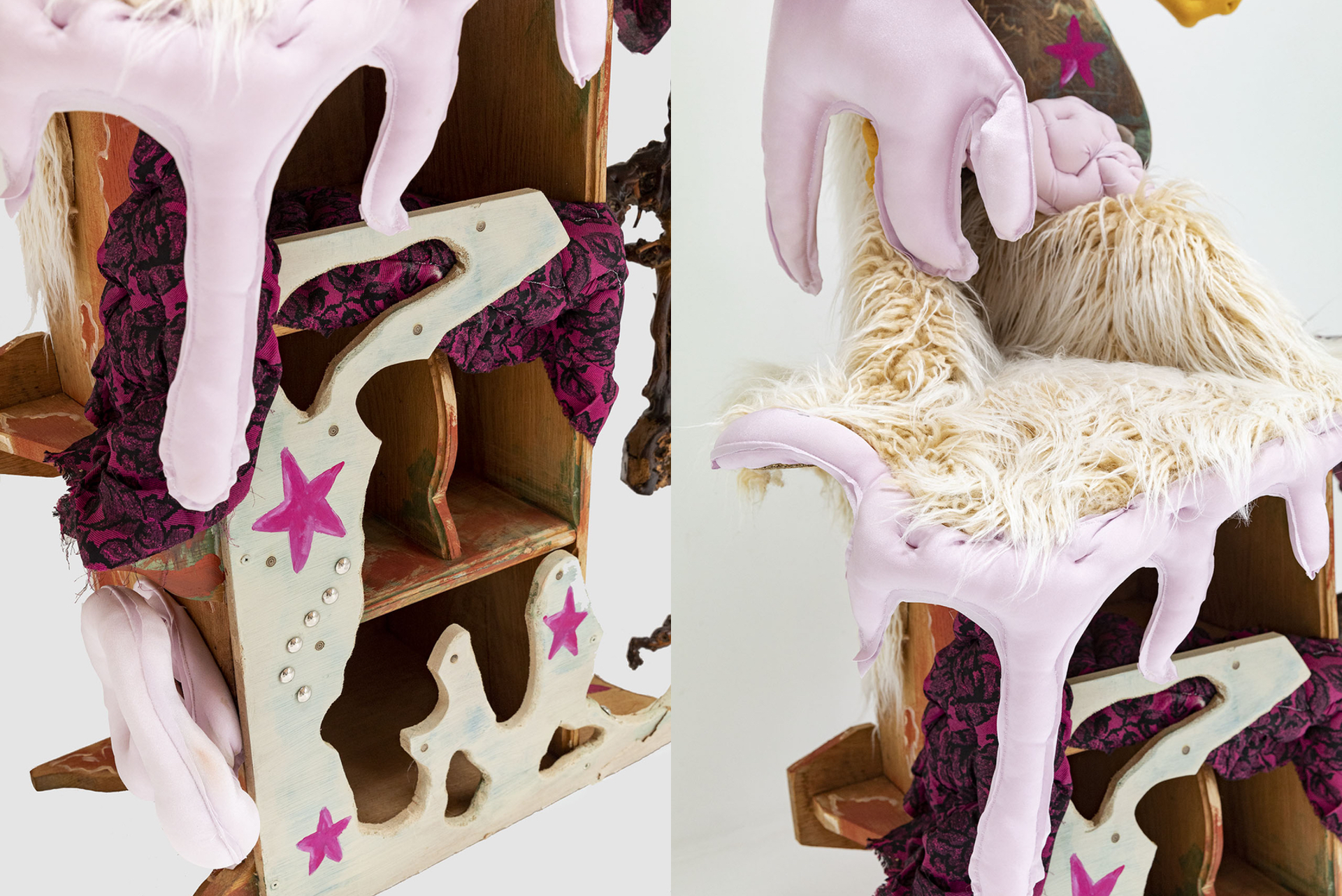 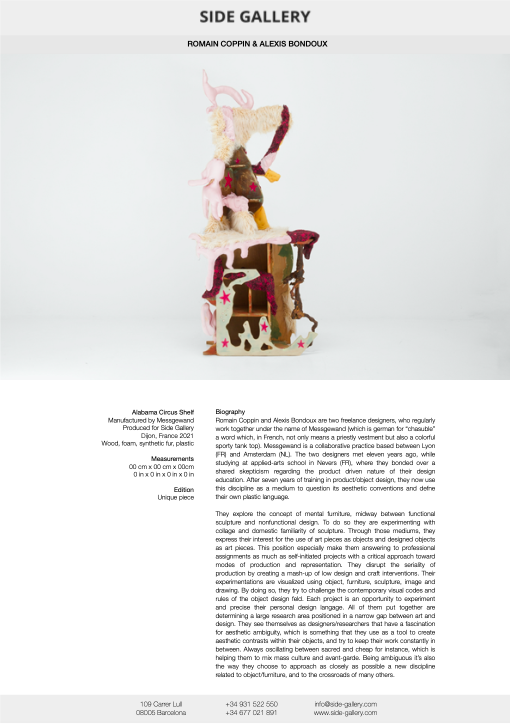 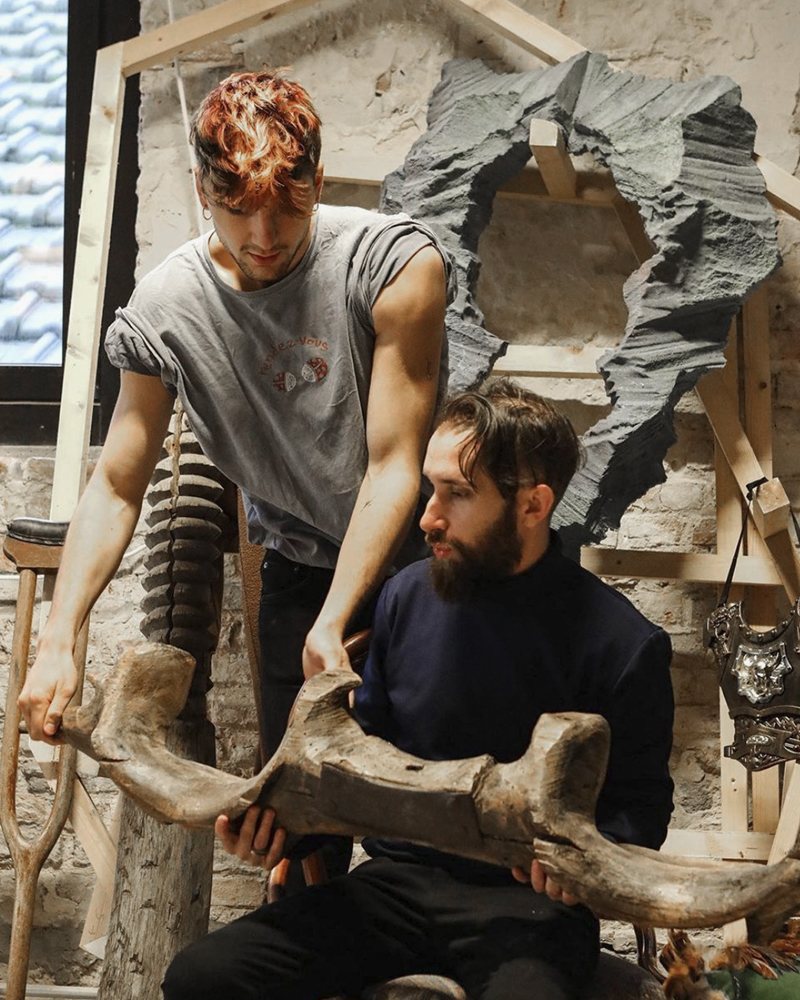 Romain Coppin and Alexis Bondoux are two freelance designers, who regularly work together under the name of Messgewand (which is german for “chasuble” a word which, in French, not only means a priestly vestment but also a colorful sporty tank top). Messgewand is a collaborative practice based between Lyon (FR) and Amsterdam (NL). The two designers met eleven years ago, while studying at applied-arts school in Nevers (FR), where they bonded over a shared skepticism regarding the product driven nature of their design education. After seven years of training in product/object design, they now use this discipline as a medium to question its aesthetic conventions and defne their own plastic language.

They explore the concept of mental furniture, midway between functional sculpture and nonfunctional design. To do so they are experimenting with collage and domestic familiarity of sculpture. Through those mediums, they express their interest for the use of art pieces as objects and designed objects as art pieces. This position especially make them answering to professional assignments as much as self-initiated projects with a critical approach toward modes of production and representation. They disrupt the seriality of production by creating a mash-up of low design and craft interventions.

Their experimentations are visualized using object, furniture, sculpture, image and drawing. By doing so, they try to challenge the contemporary visual codes and rules of the object design feld. Each project is an opportunity to experiment and precise their personal design langage. All of them put together are determining a large research area positioned in a narrow gap between art and design. They see themselves as designers/researchers that have a fascination for aesthetic ambiguity, which is something that they use as a tool to create aesthetic contrasts within their objects, and try to keep their work constantly in between. Always oscillating between sacred and cheap for instance, which is helping them to mix mass culture and avant-garde. Being ambiguous it’s also the way they choose to approach as closely as possible a new discipline related to object/furniture, and to the crossroads of many others.

They use their design background to hack the usual product design process of creating and making such as thinking - sketching - drawing - modeling - making. They see each step of it as a potential fnal proposal instead of having them linked in a global and closed production loop. For Messgewand, it is really more fulflling to experiment all these mediums independently from each other by keeping them in an open relation, where they all have the same hierarchy regarding the notion of fnality. One of their challenges is to display the results of their experimentations in some stages which are not the usual ones. They want their artworks to be “about” design more than being design themselves. Challenging the conventional process enables them to build abstract representations of functional design, based on a maximal and excessive ornamentation.

The intuitive and raw collage is the main part of their practice. Connected to an empirical production process, it became their favourite and most powerful way to produce their pieces so far. It really fts their desires of over materiality and obsessive decoration. It allows them to mix mediums, popular aesthetics and domestic codes. Their work is actually a collage of effects (texture, colors, decoration, accessories) combined with poor material, semi-object and leftovers that they enhance by layering, covering, composition and ornementation. Thanks to that re-reading of found material, they are able to create busy objects made of contrasts and ambiguity between trash aesthetics and plastic radicality. 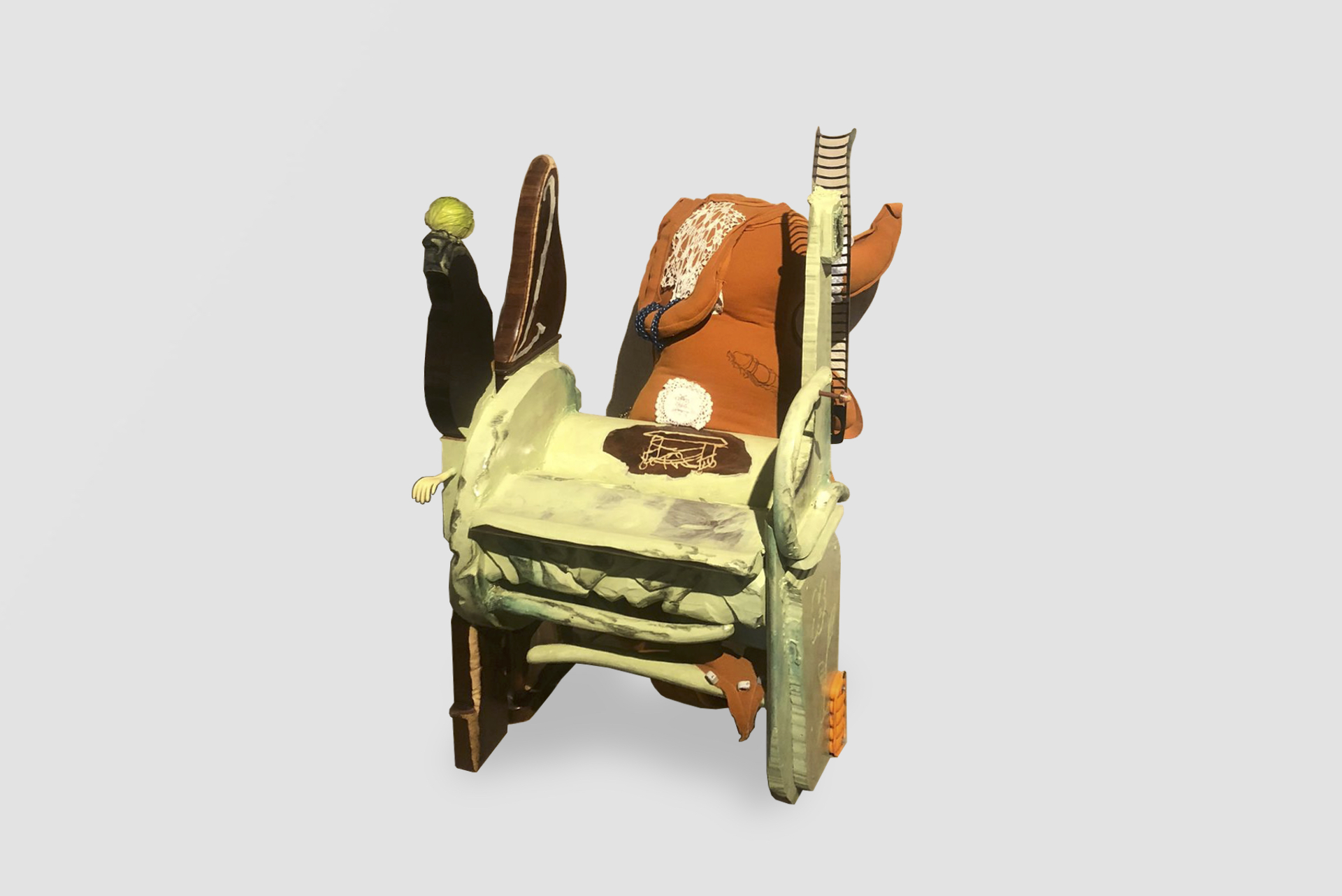 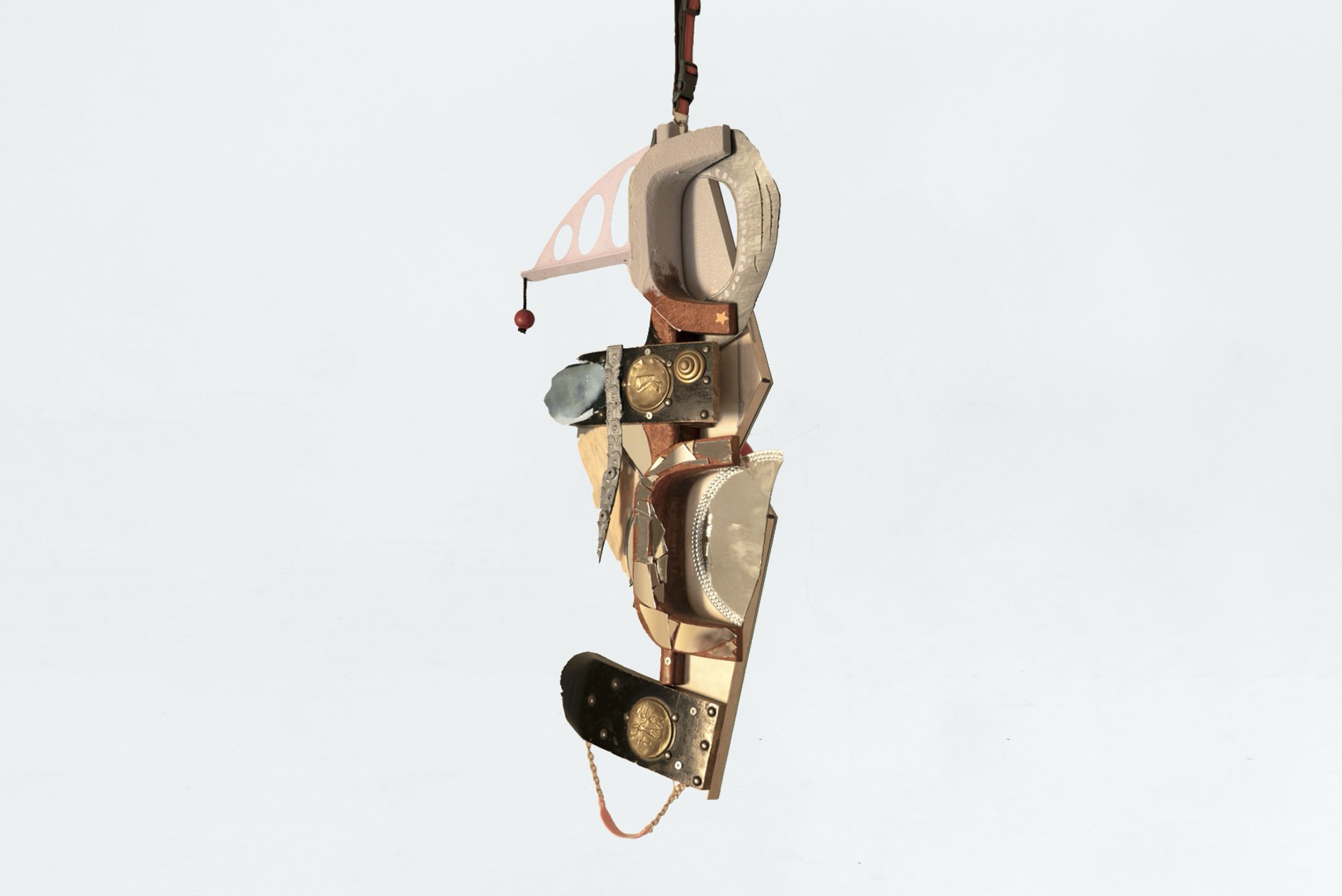 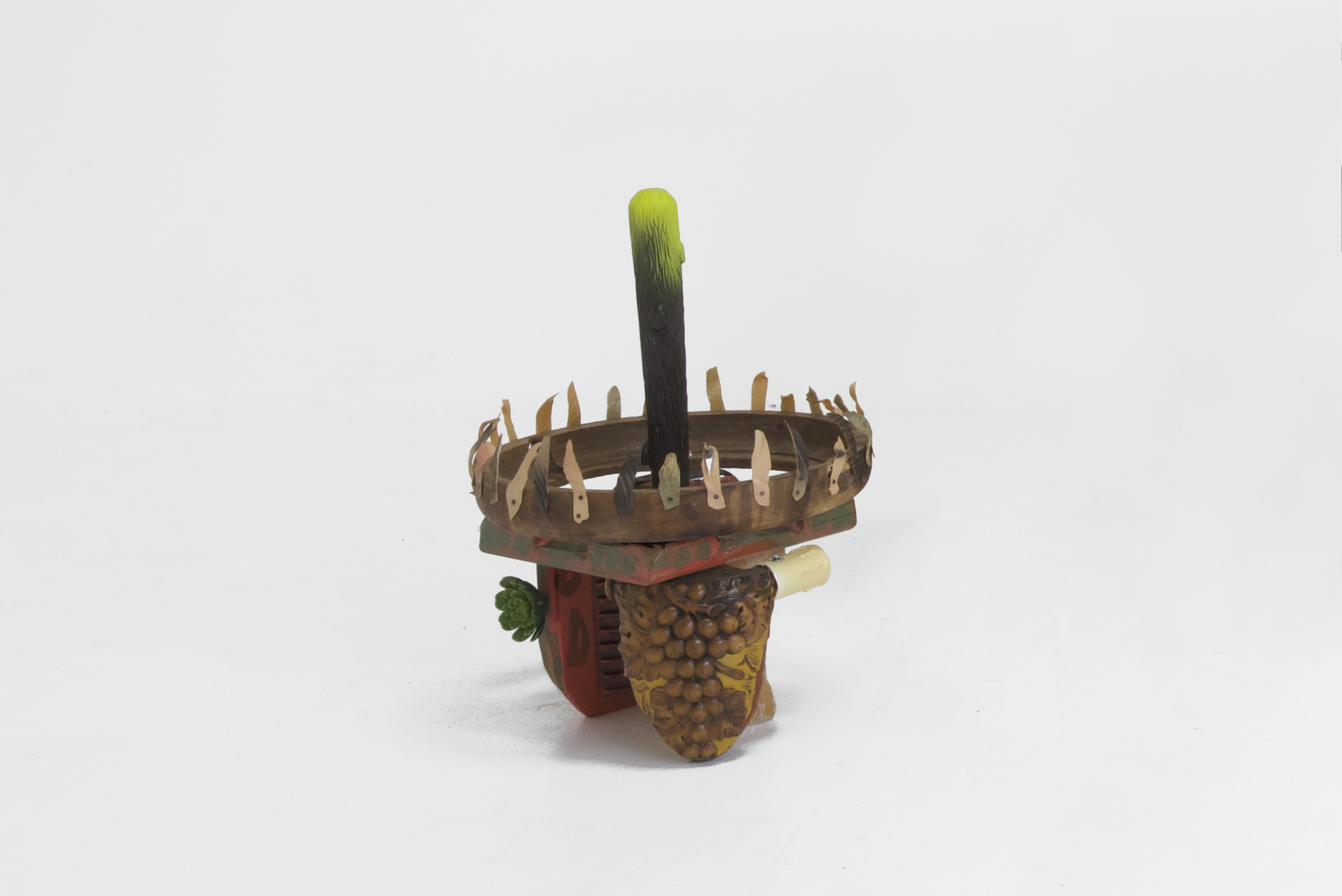 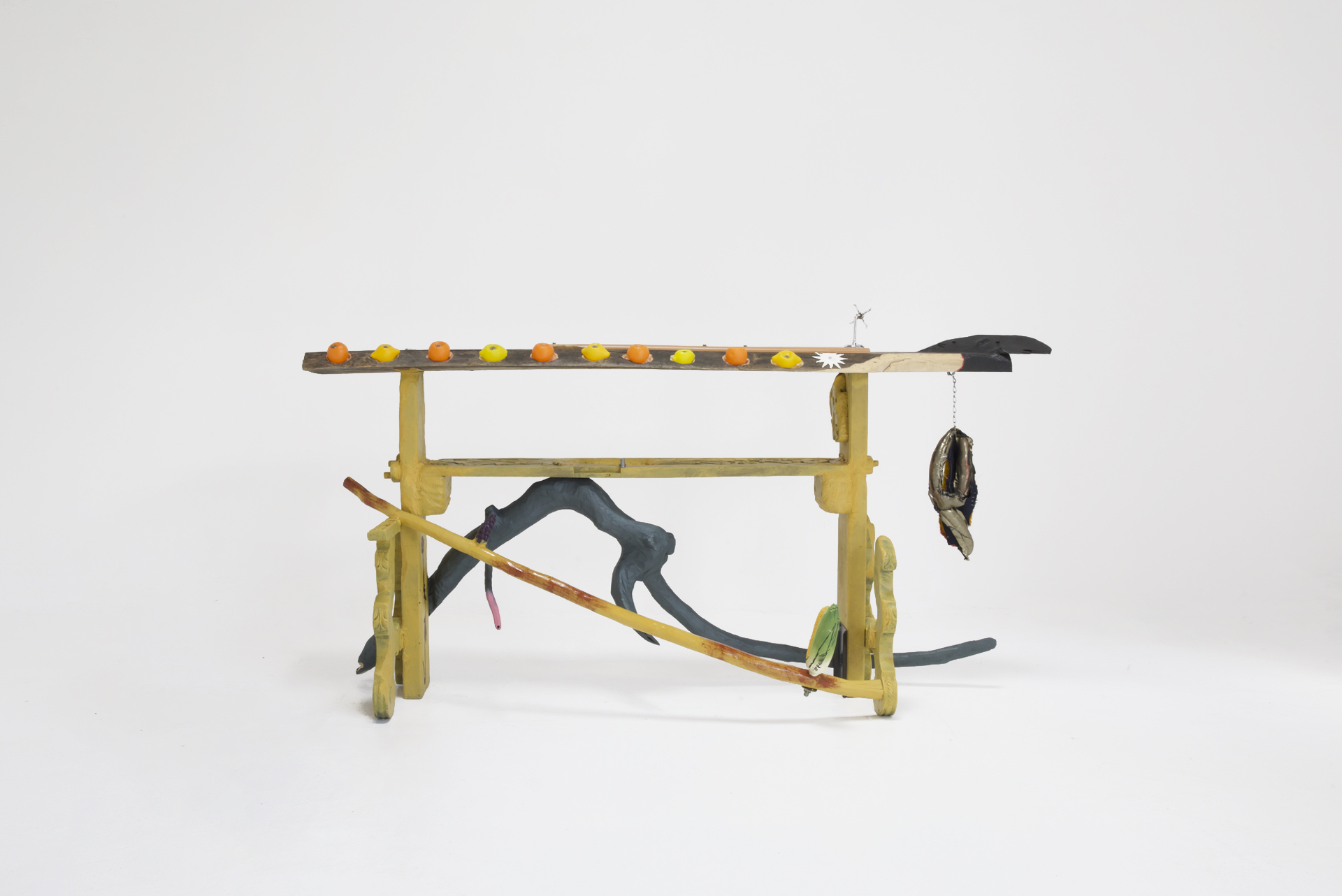