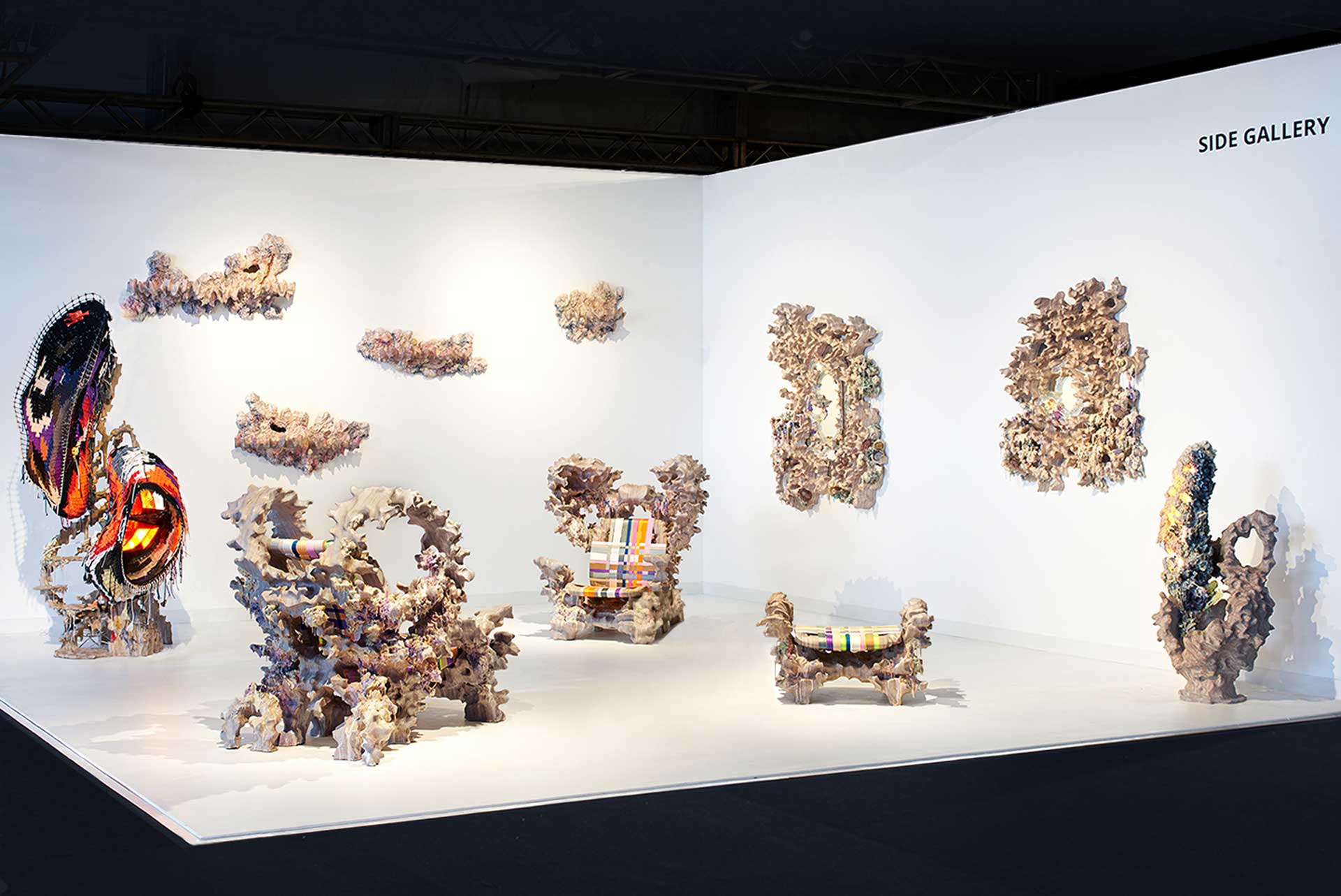 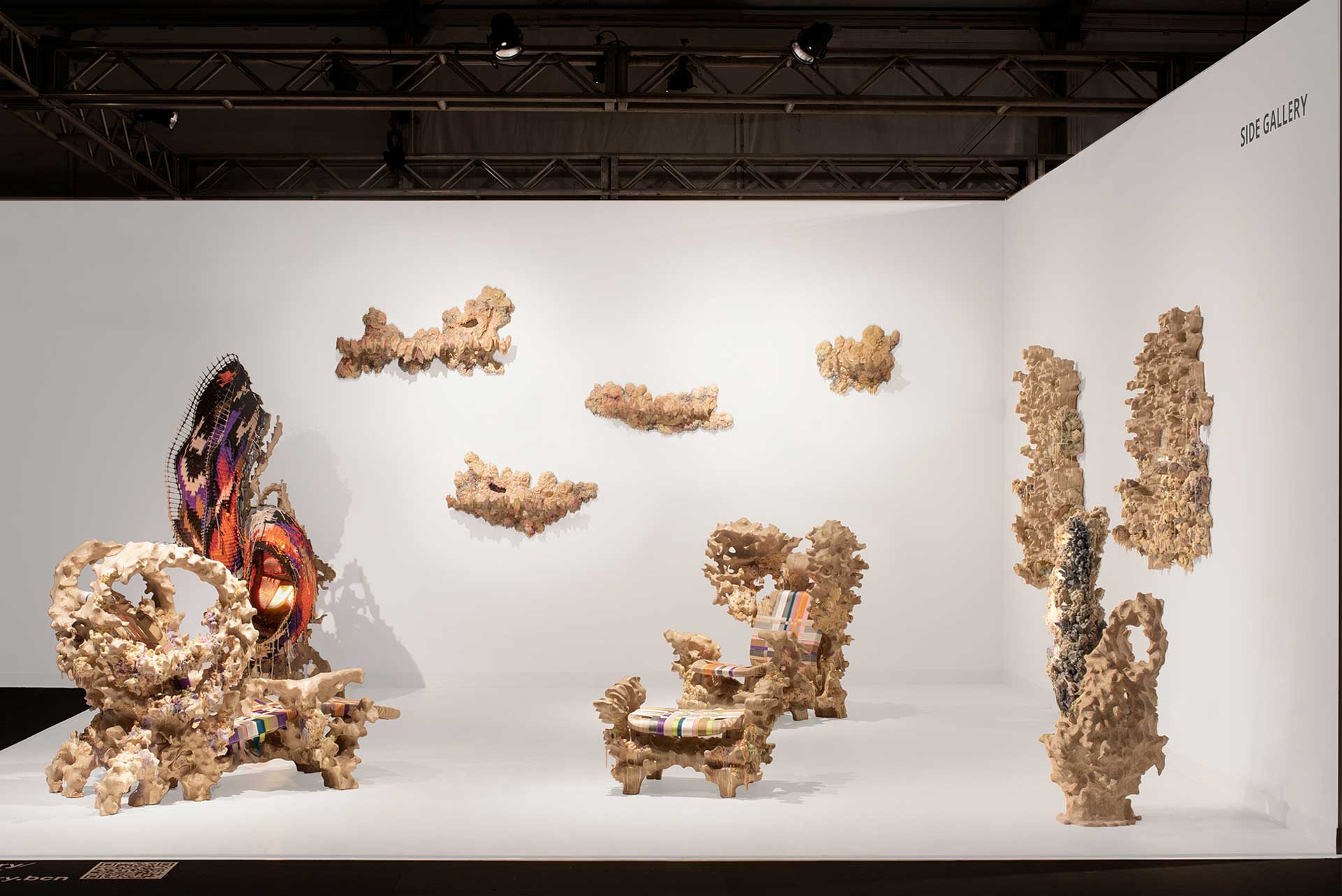 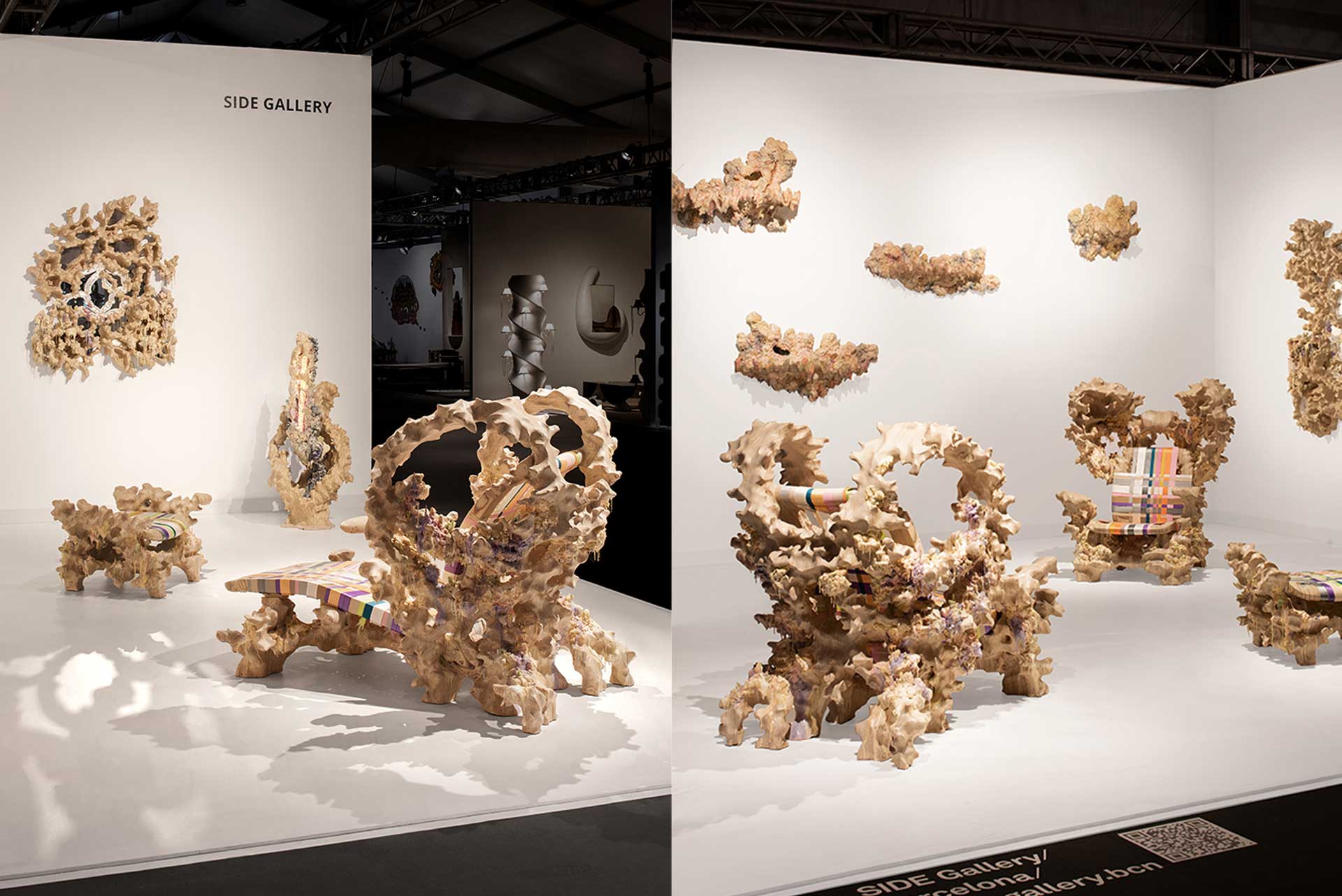 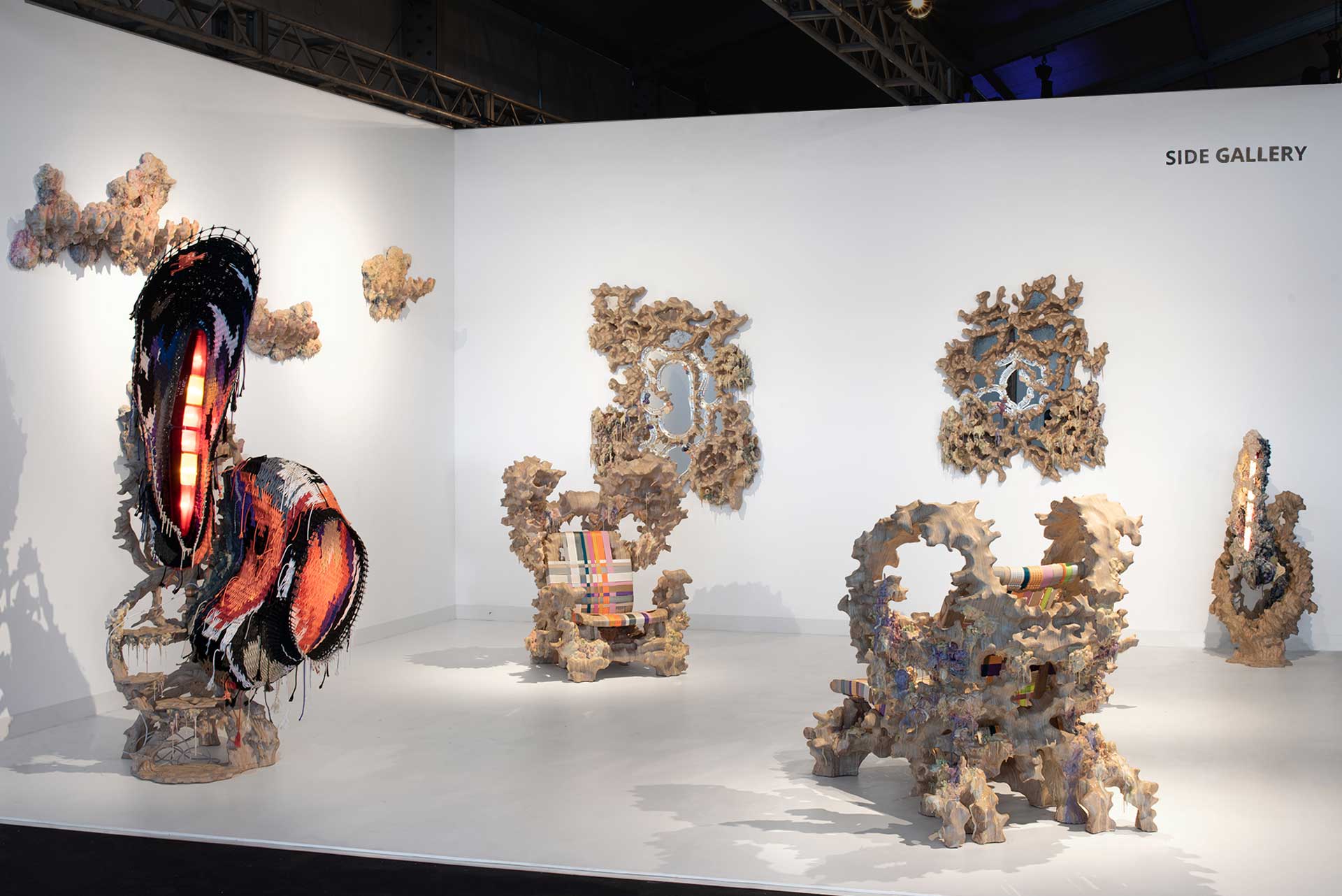 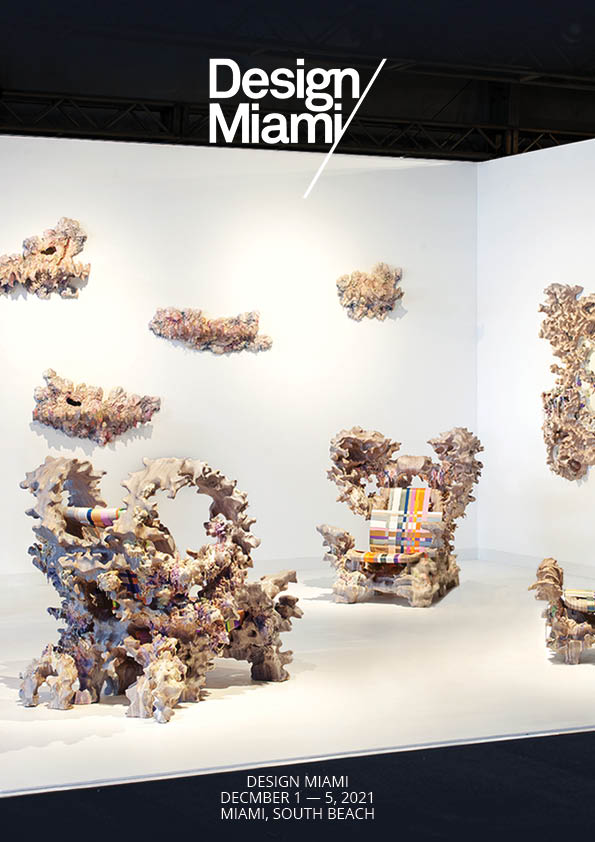 On the occasion of Design Miami 2021, Side Gallery has shown both original works from this experimental series, alongside a new collection commissioned exclusively for the fair. As a continuation of the Metamorphosis series, Tadeáš Podracky has meticulously hand-carved a series of modular wall shelves, a stool, a Lounge chair and an armchair. Through a highly labor-intensive process, material research and a contemporary approach to craftsmanship, Podracky’s skillful and hands-on method reformulates traditional design applications.

The Metamorphosis series, derived from a period of Podracky’s life when access to materials was limited. The designer started to work only with materials found around the studio. Tadeáš realized that these materials had a certain authenticity and so began revaluating the way he approached the materiality. He let the objects grow through his hands by gluing and combining different elements, reminiscent of a bird weaving its nest. This approach allowed him complete freedom, resulting in an unpredictable outcome, depending solely on authentic personal expression, and leading the creation of a radical body of works. 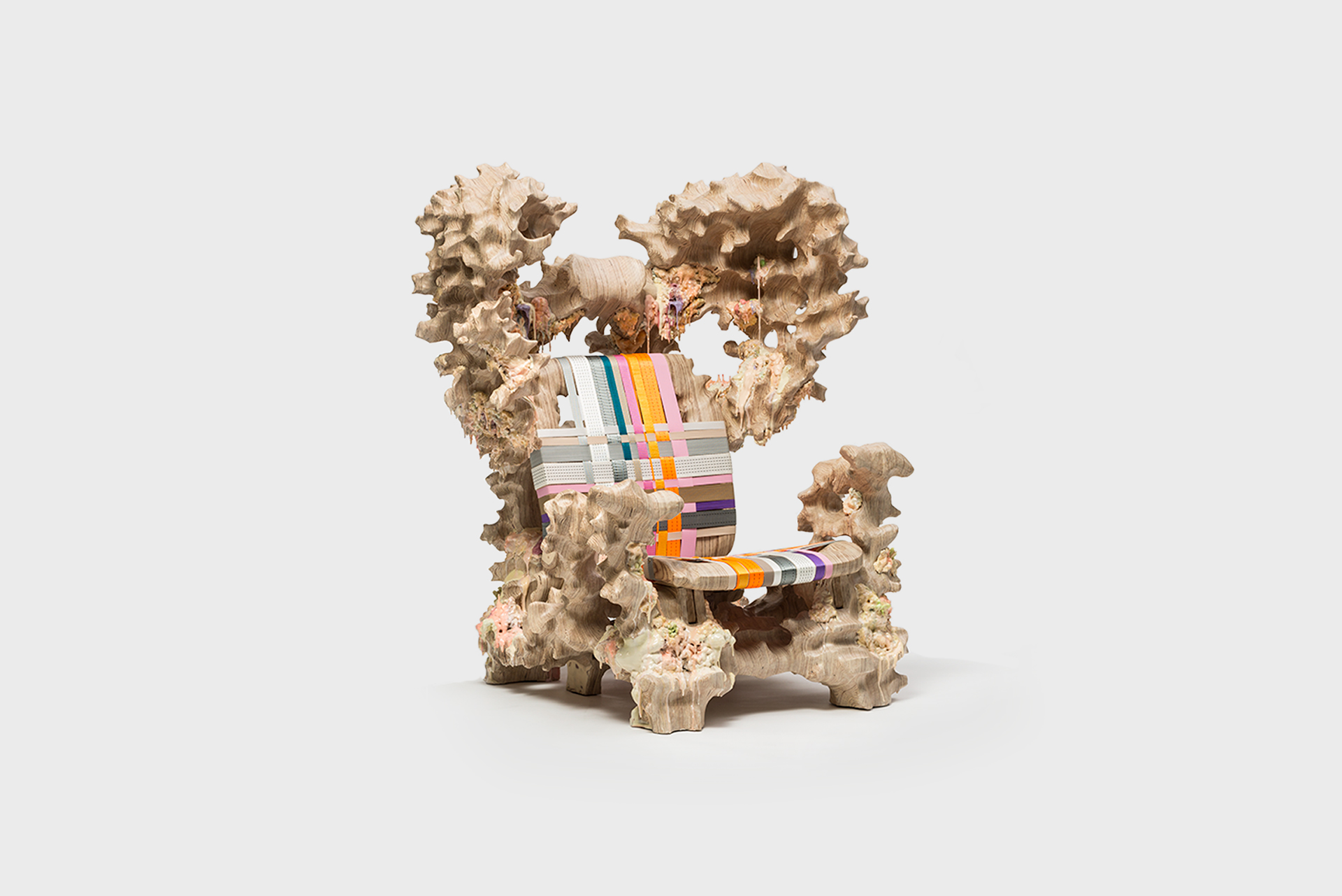 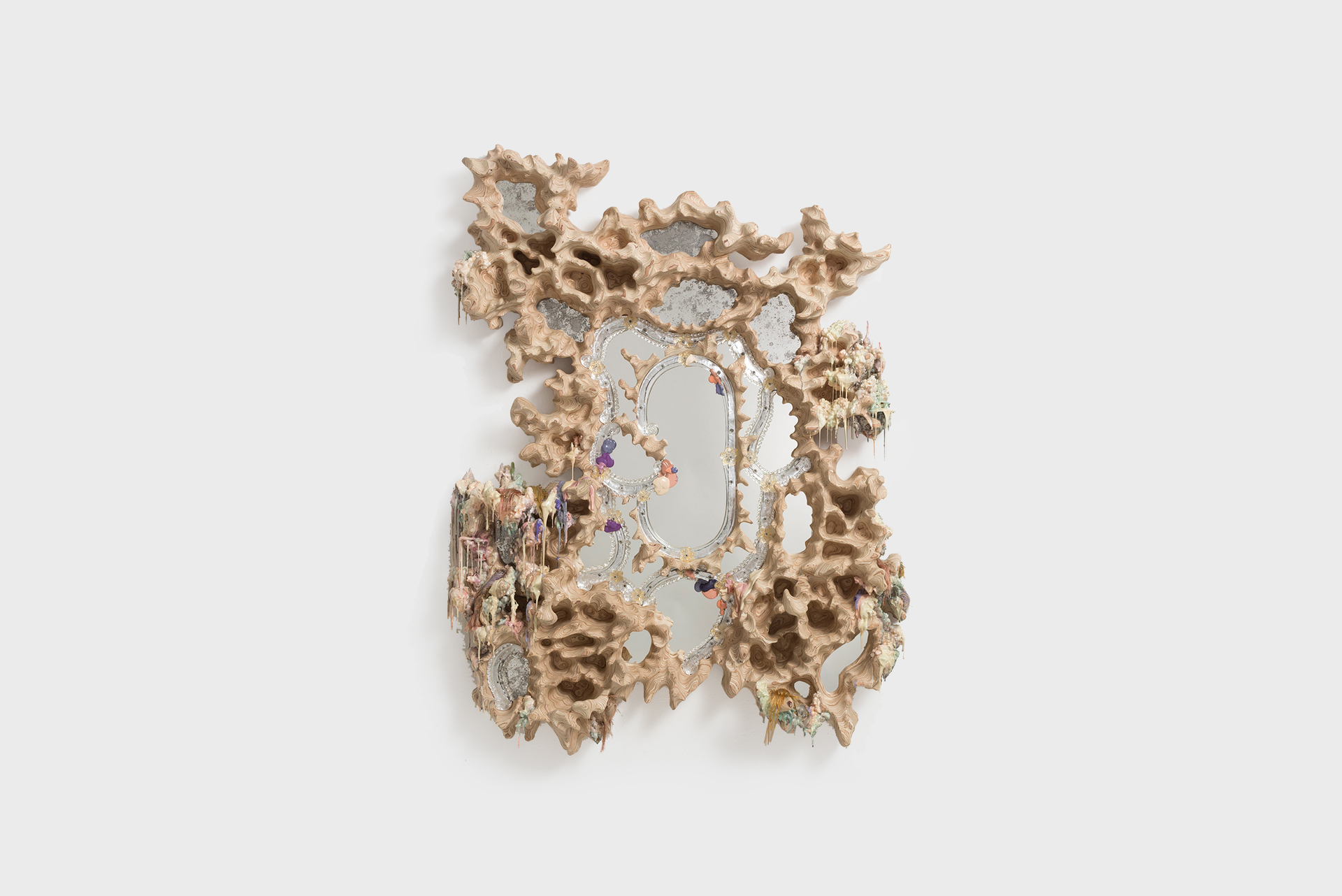 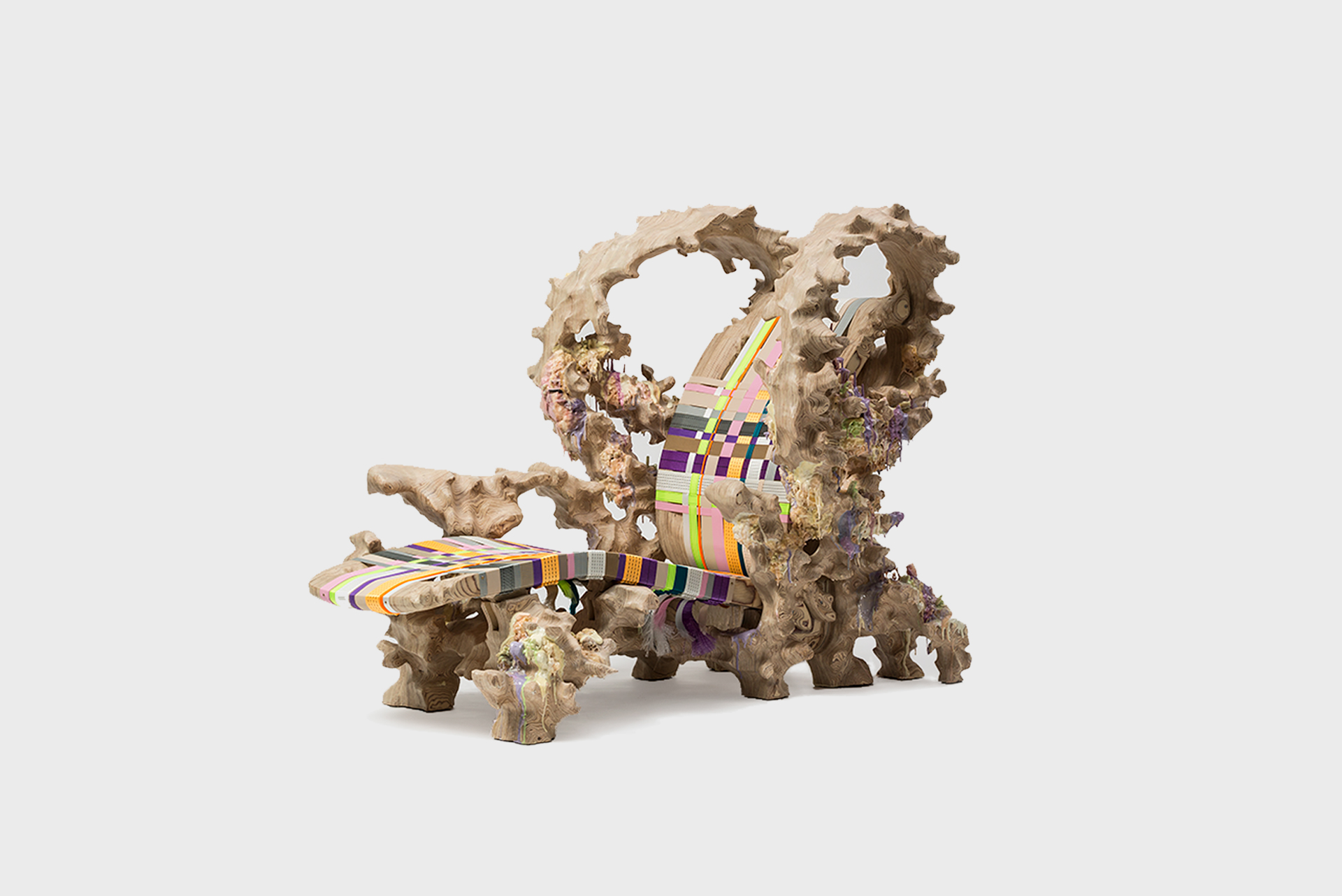 As an extension of the series, Podracky has introduced two chairs, a stool and a series of modular wall shelves to the Metamorphosis family. The seating elements deal with the archetypal representation of the chair. When thinking about his approach, Podracky realised that the goal was not the destruction of the known archetype, as previously thought when creating earlier elements from the series, but rather a gradual transformation, maintaining aspects of its negation, yet allowing it to evolve organically, leading to a combination of existing elements and new unknown applications. At the forefront of his concept lies the human anatomy; the plywood construction grows freely around the woven surfaces, embracing and protecting the body, allowing for a true sense of connection. The seating elements outgrow their primal form and function through the Metamorphosis, proposing and ephemeral transformation, creating mysterious liquid like silhouettes.

The Czech designer’s production process stems from the ongoing transformation of the series. The methodology is based not on defining the final object, but instead, he places an emphasis on the gradual stages of the making. Through a labor intensive and almost endless process of hard craftwork, emerges an object, smooth and flawless, created through sensitive organic modeling. The final process, a more joyful chapter, is the expressive application of liquid plastic to the wooden surfaces, creating delicate material tensions and disrupting matter. These handicraft techniques cannot be entirely controlled, instead are defined by their unpredictability; looping back to Podracky’s desire not to design the object’s appearance, alternatively making quick decisions and spontaneous reactions to the material and object itself. This expressive aspect of the process is innately linked to Podracky’s weaving technique, used for supporting the body of the seats. Lost in the unlimited choice of colour and materiality, Podracky is fascinated by the process, leaving the final appearance open until the last moment. His whole process is absolutely free, an authentic gesture of the designer himself.

Alongside, the two floor lights, collection of modular shelves and seating elements, Tadeáš has created two wall mirrors. “Fading Reflection”, commissioned by Venice Design Biennale, is the result of Podracky’s Venetian experience in contact with the local artisan tradition of Berta Battiloro and Ongaro and Fuga Specchi Veneziani. These latest works manifested through an exploration of Venetian mirror-making tradition with the aim of disrupting our perception of what tradition represents. Podracky’s mirrors invite the viewer to envision a scenario where tradition is a constant evolution. Through the exploration of materials that are traditionally obscured, such as the wooden frames, Podracky pulls these elements to the surface giving them their maximal scope. This is represented by transition, the further one moves from the center of the mirror the more traditional perception disappears, and other more modern materials emerge. In many ways the mirrors are representative of Podracky’s work as a whole, by reevaluating these principles of tradition and craft, Podracky develops work that maintain historic relevance but also achieves a multi-layered identity, combining unconventional elements. 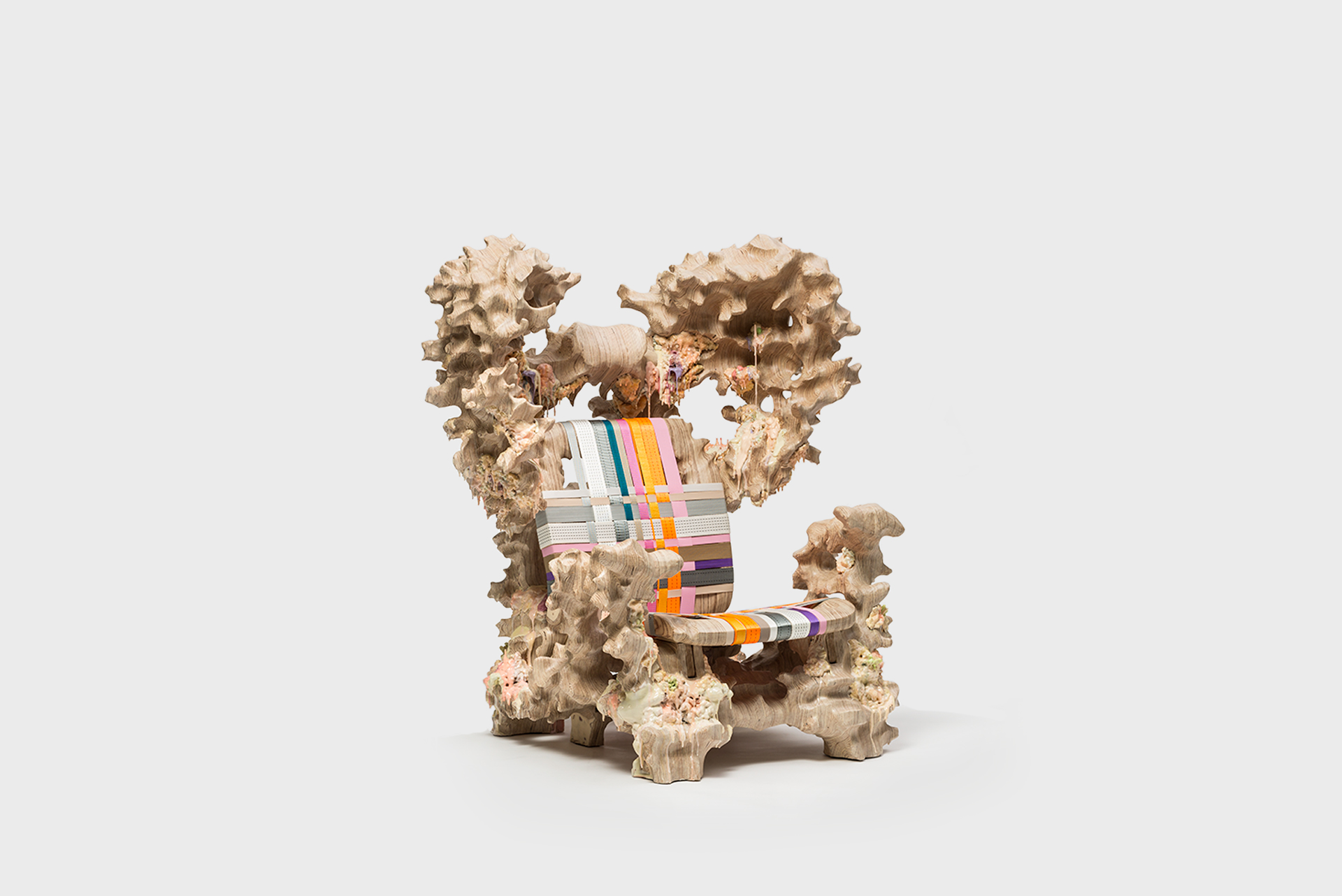 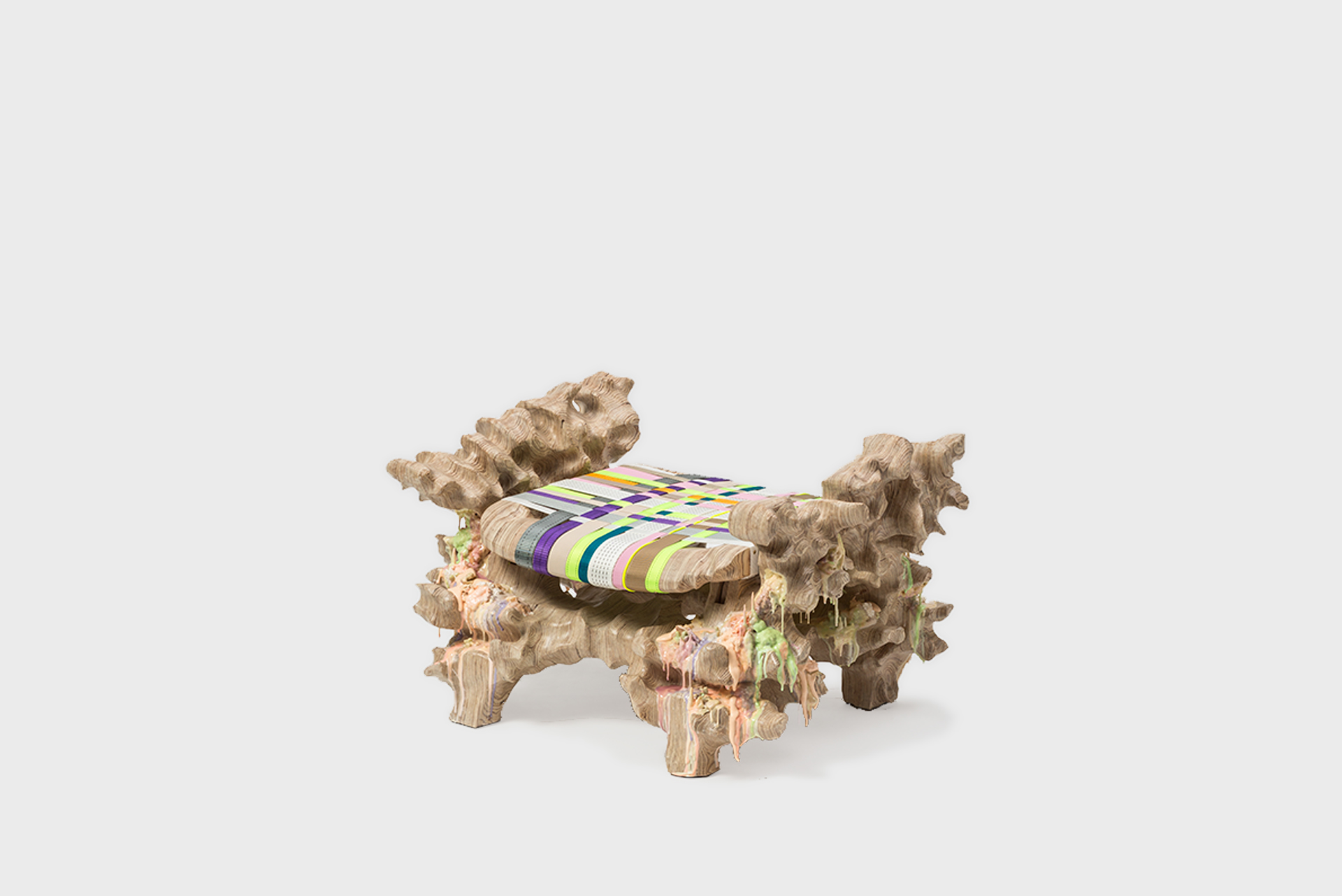 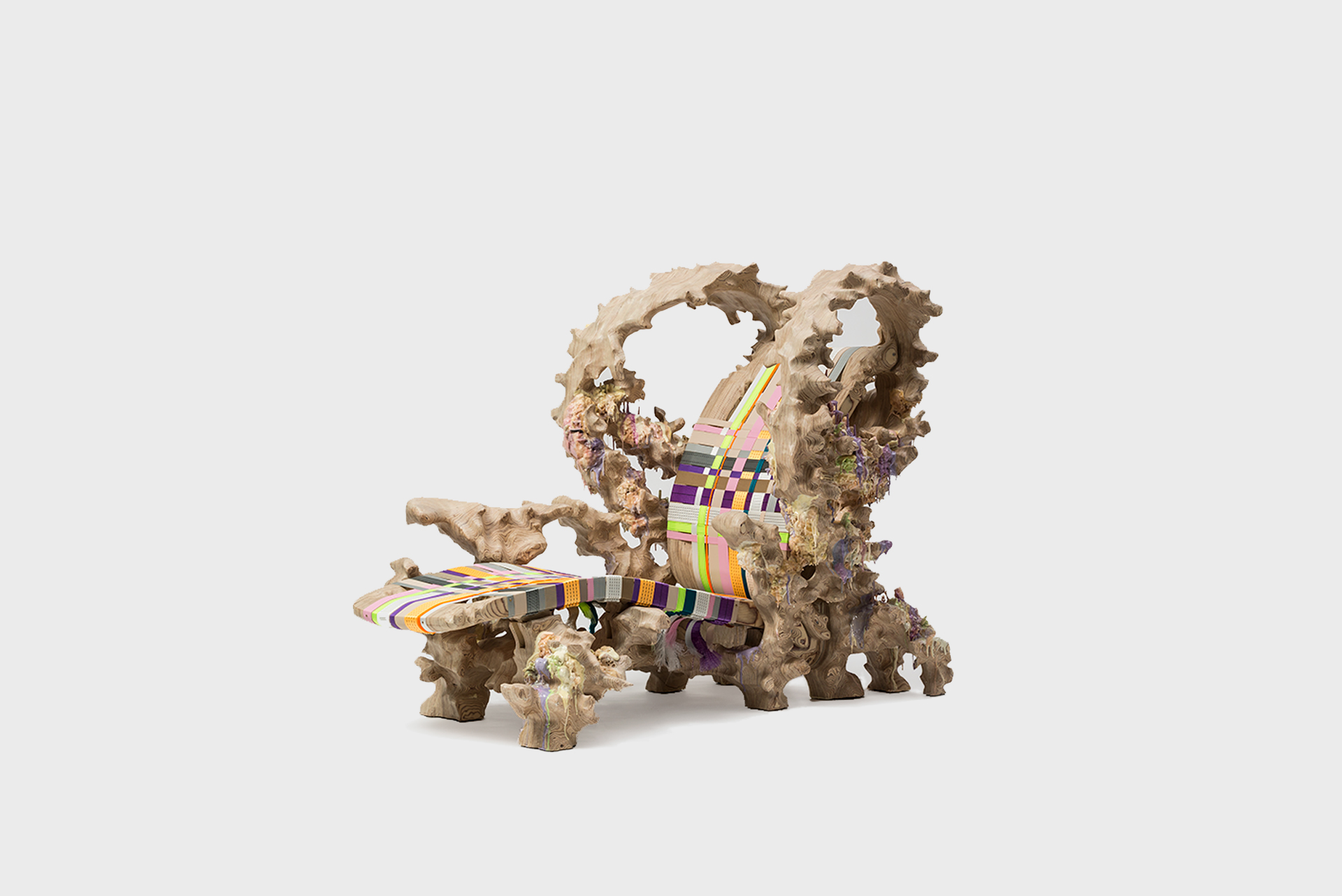 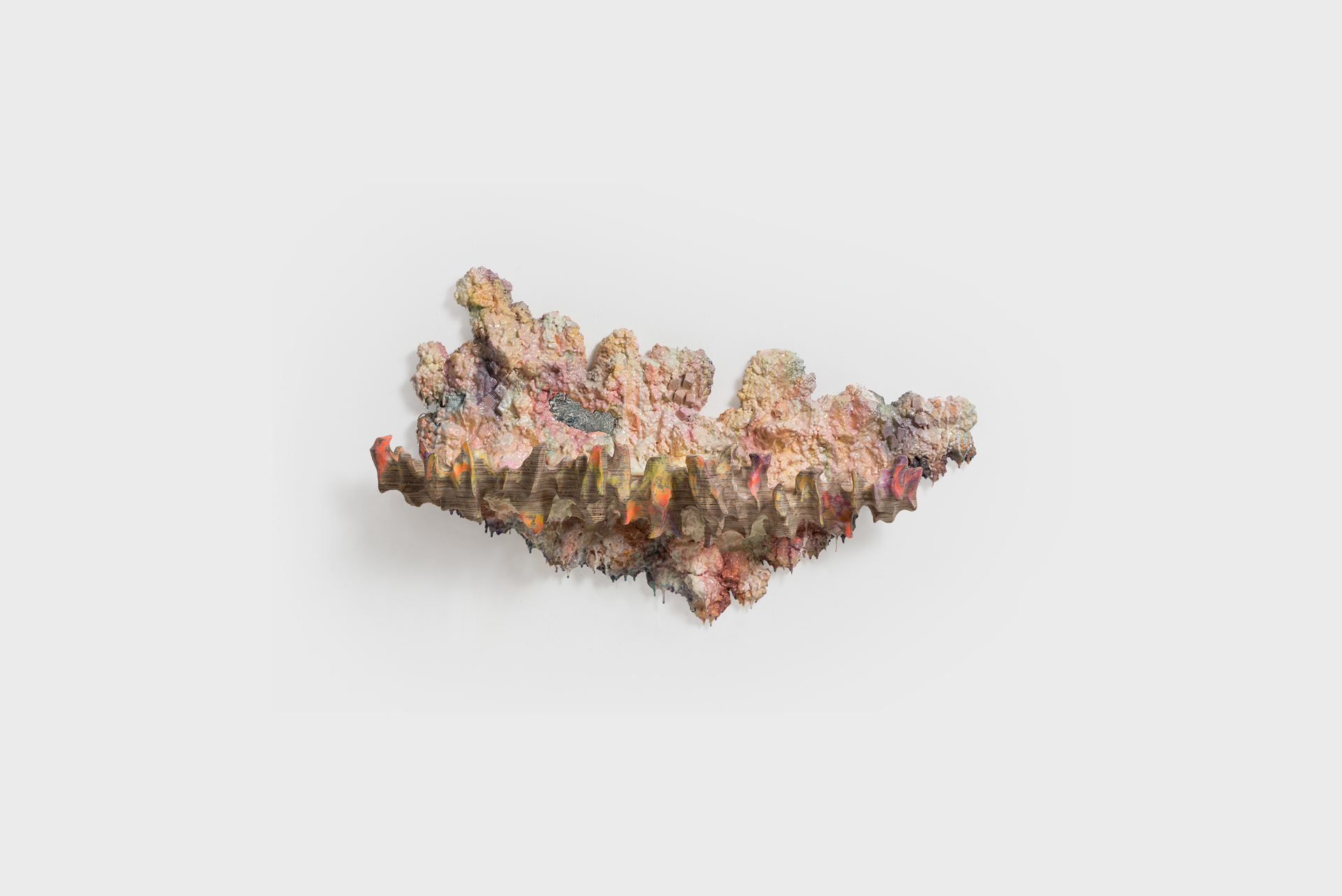 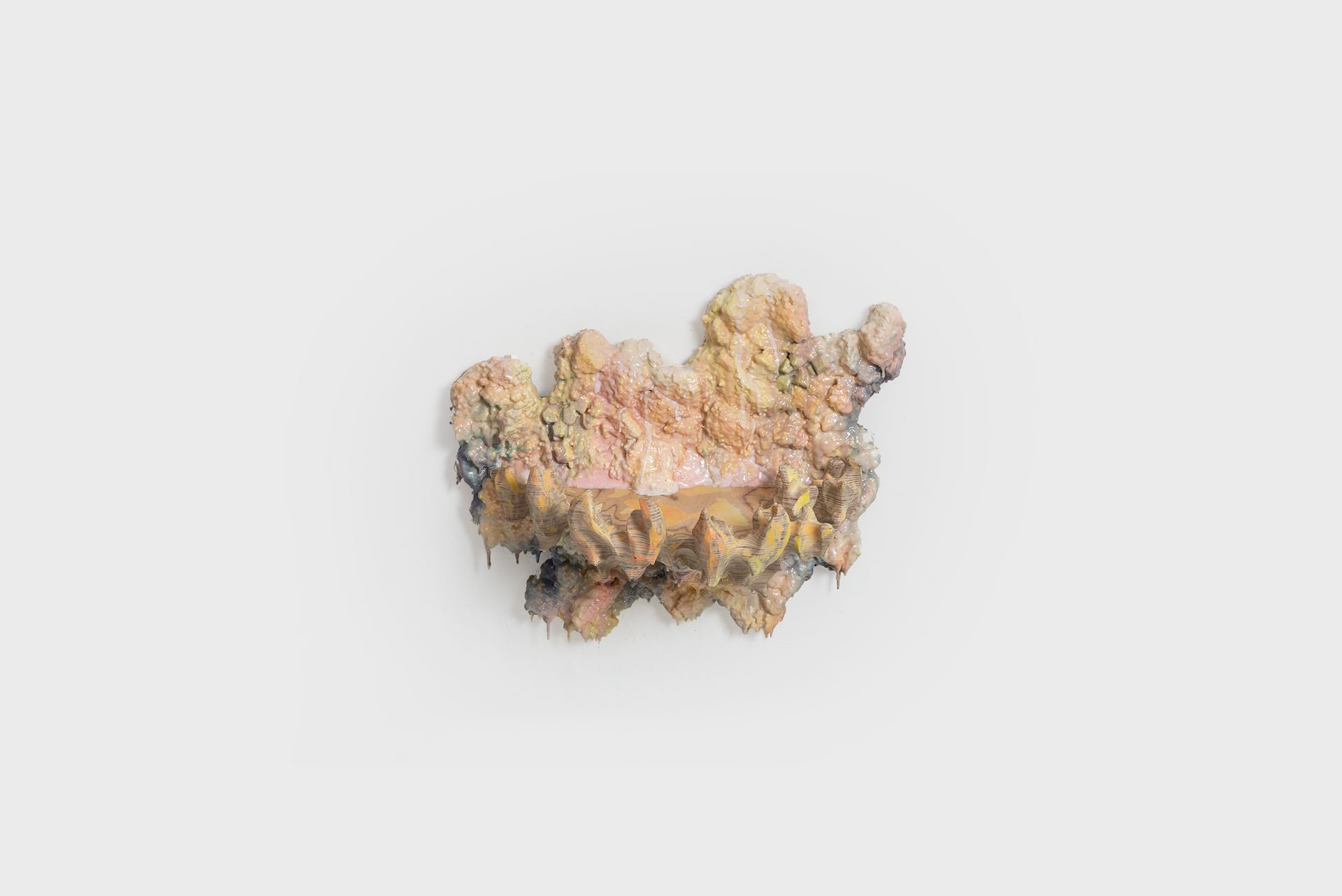 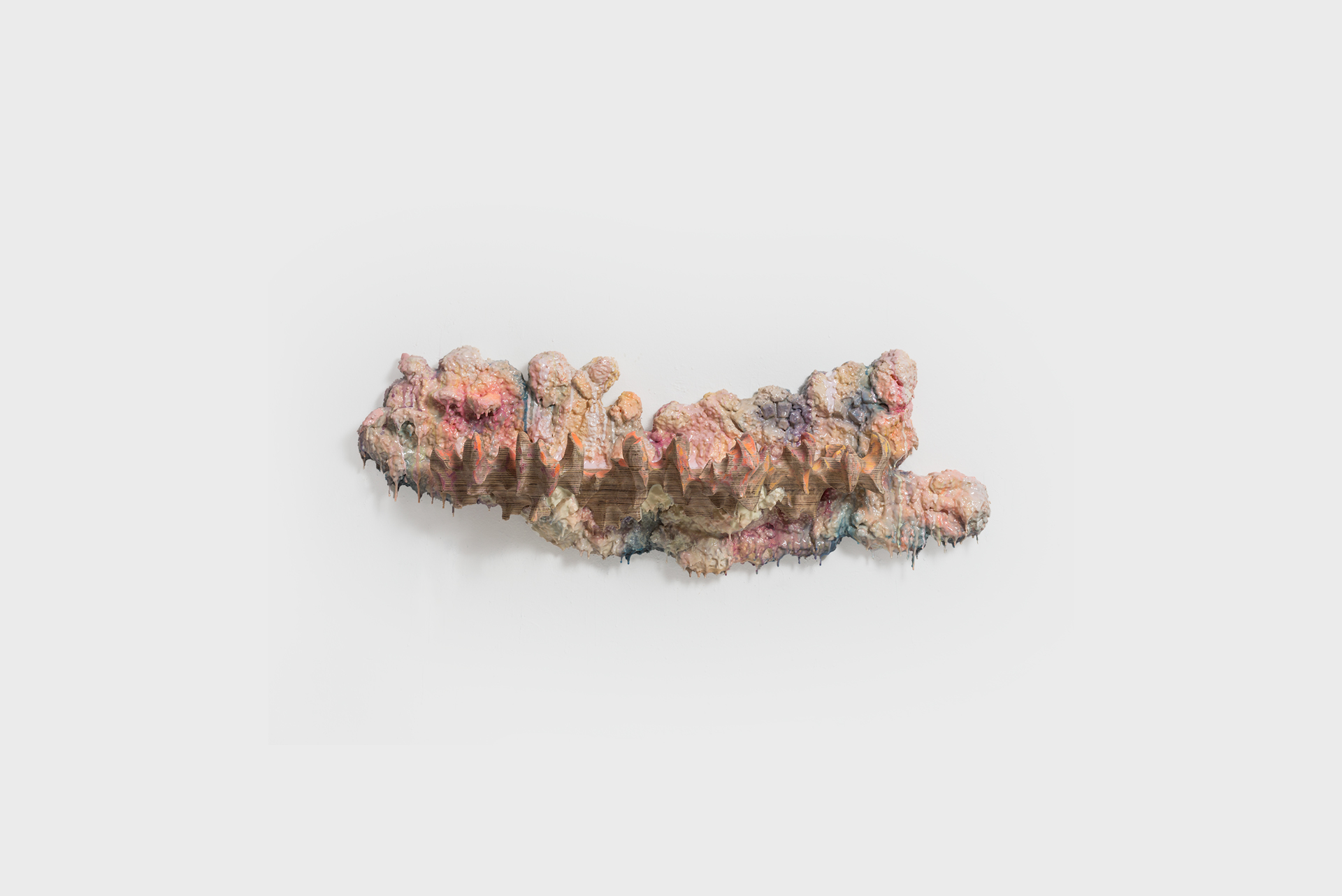 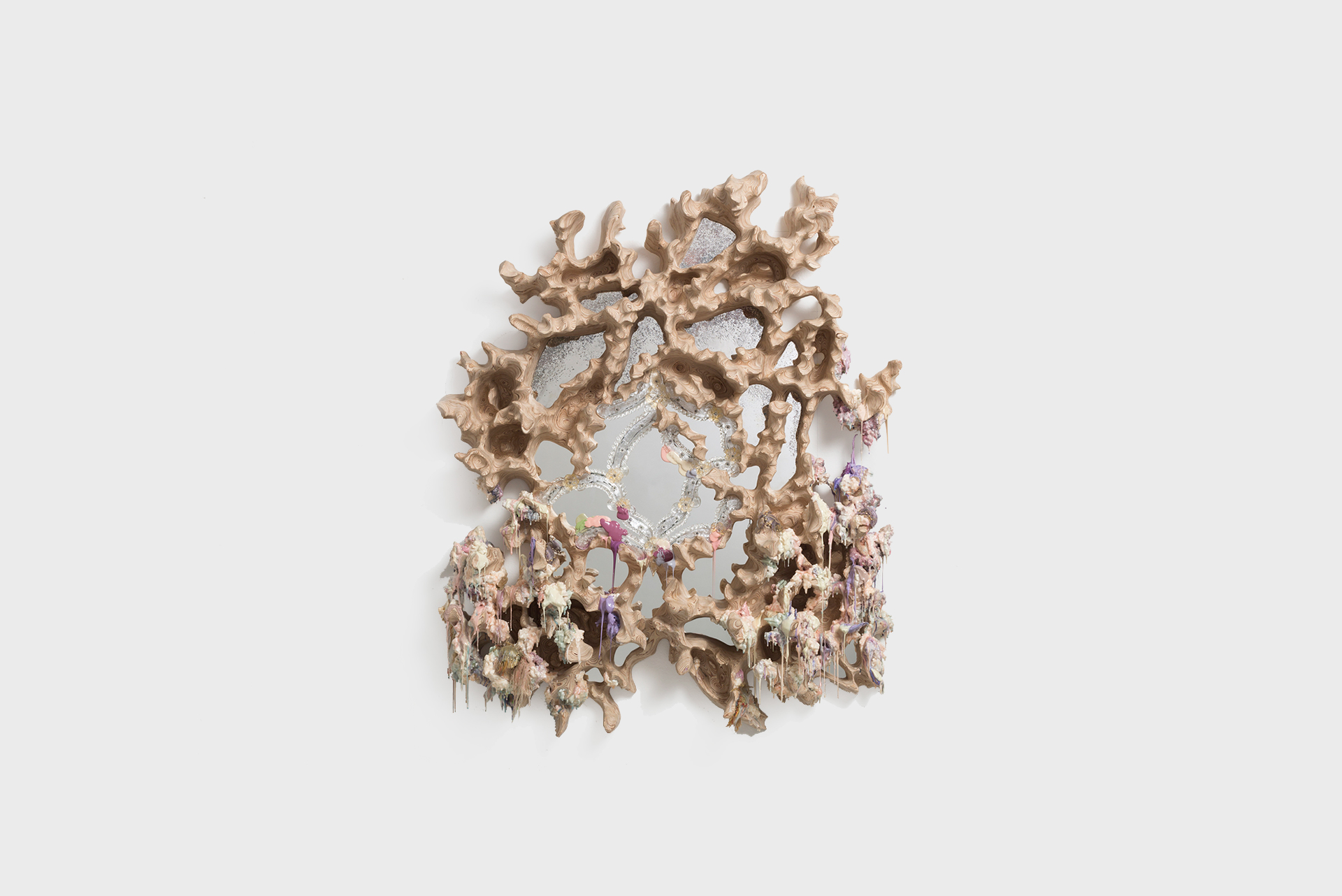 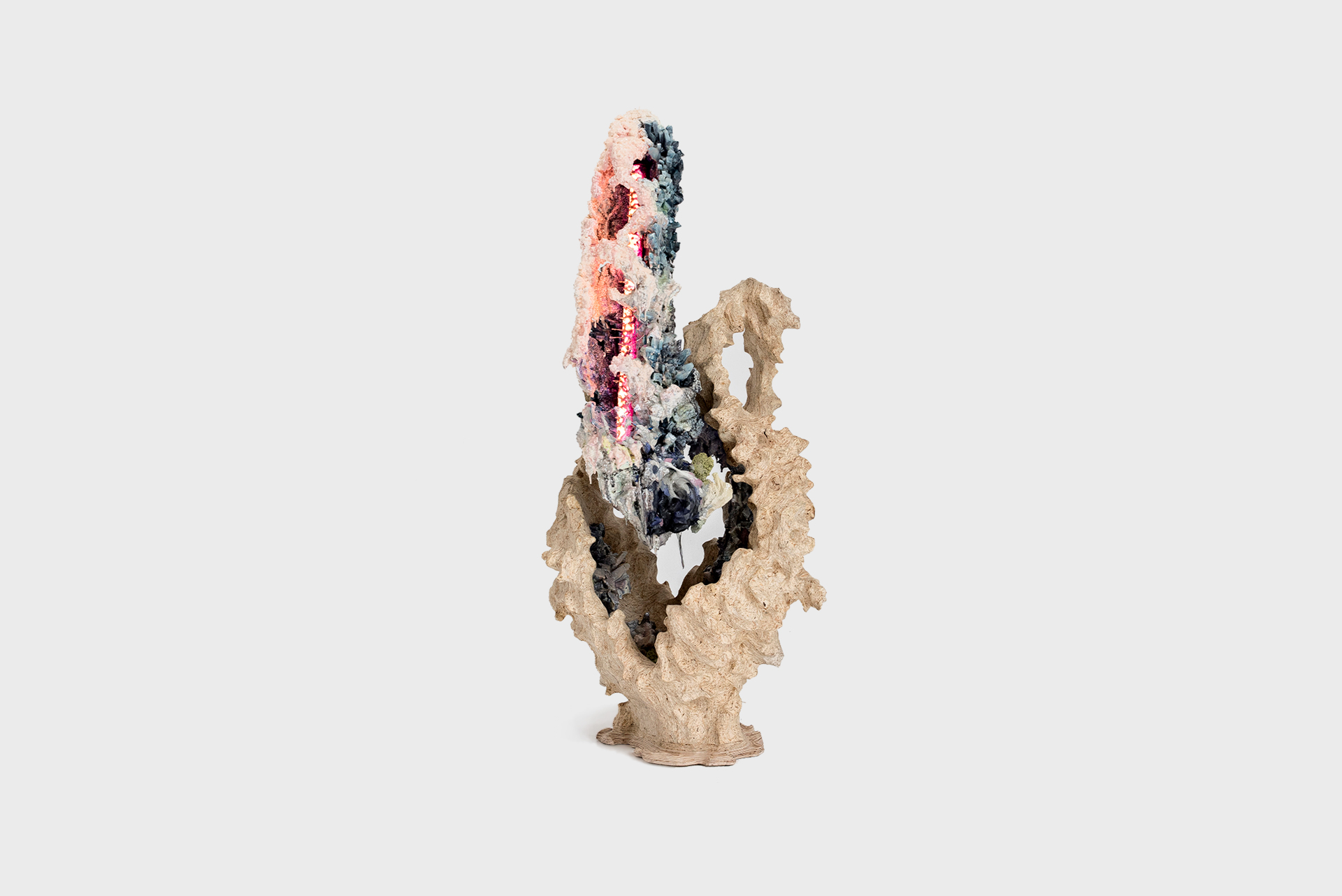 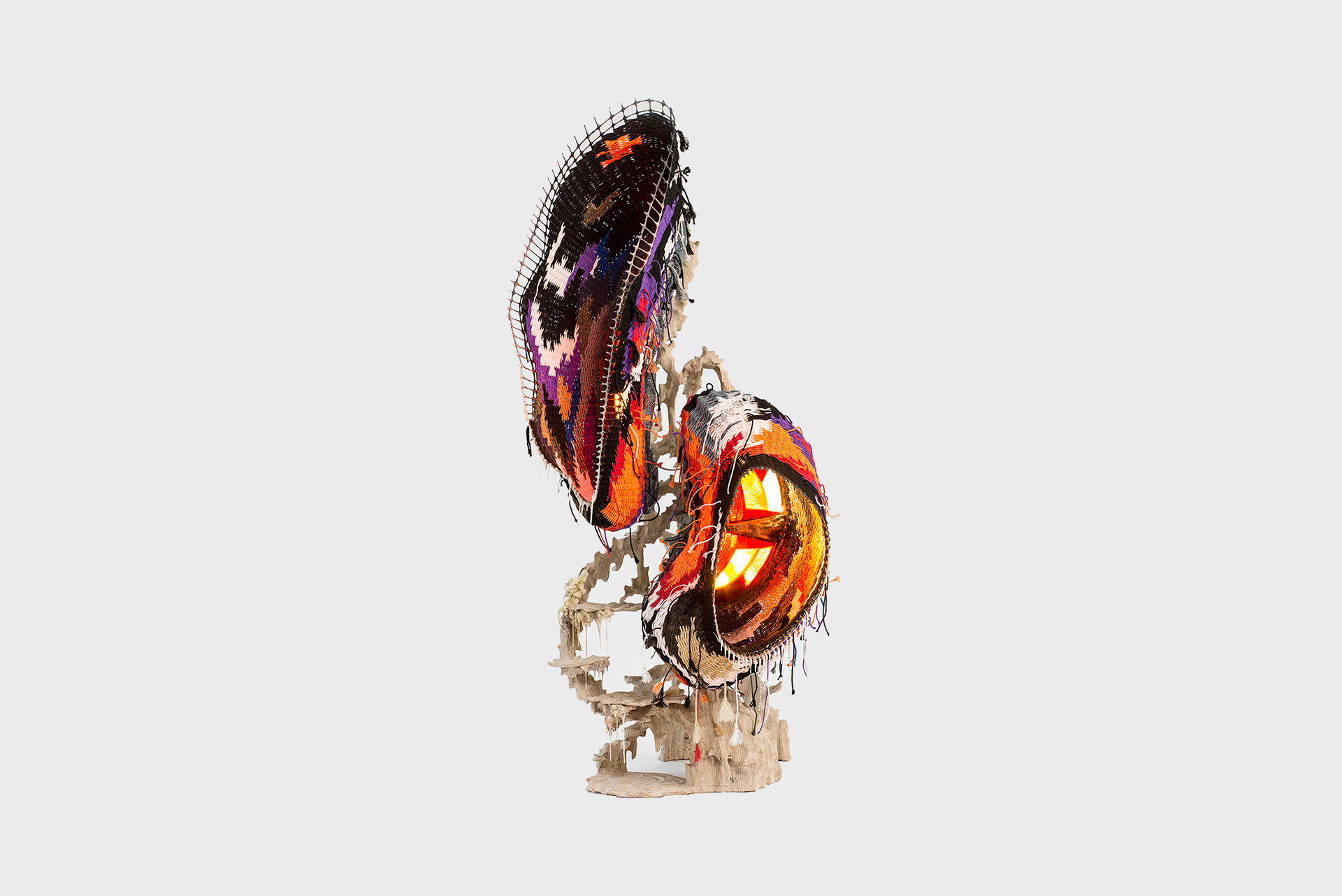 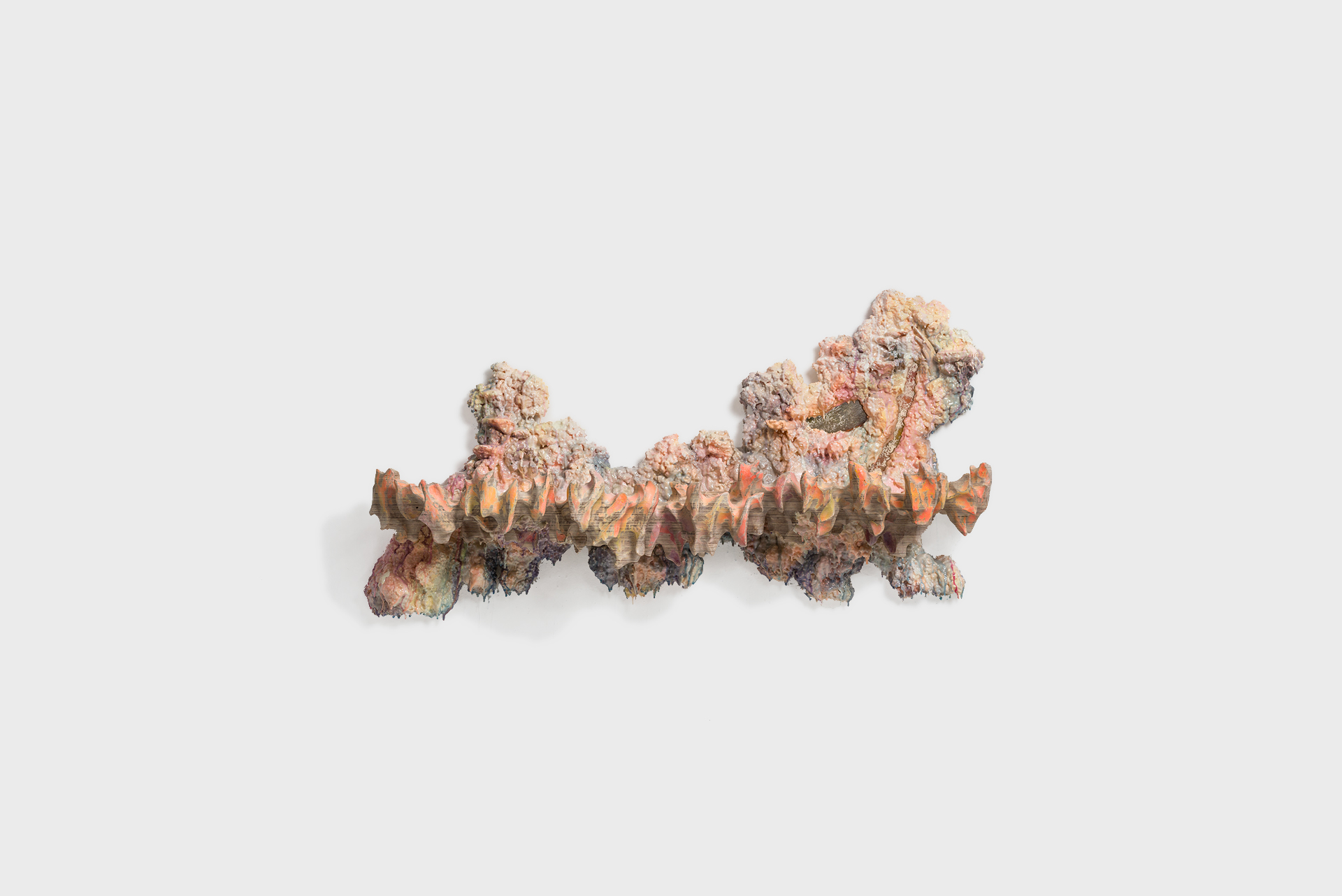